You are here: HomenextPlacesnextWICKLOW TOWNnextFAM Electrical Appliances of Wicklow Town

We have received an appeal from the National Museum of Country Life, Castlebar for information about the FAM brand appliances, manufactured at the Couper Works factory, located in Wicklow Town on Quarantine Hill in the late 1950’s to early 1960’s.

The Museum would ideally like to source some FAM appliances for inclusion in a major exhibition ‘Electric Irish homes’ which opens July 2019 at the Museum of Country Life. This exhibition will be  very interesting as it will examine how women impacted on, and were impacted by rural electrification amongst other topics.

It would be really wonderful to include Wicklow input, so if anyone knows anything can you let us know, either by posting a comment below or be e-mail to dburns@wicklowcoco.ie

For background information please read extract below (pages8-10) of an article ‘Made in Ireland’? National Narratives and Hybrid Identities in Irish Design History’ by Sorcha O’Brien, Kingston University London. The fill article may be accessed on the pdf at the bottom of this page. 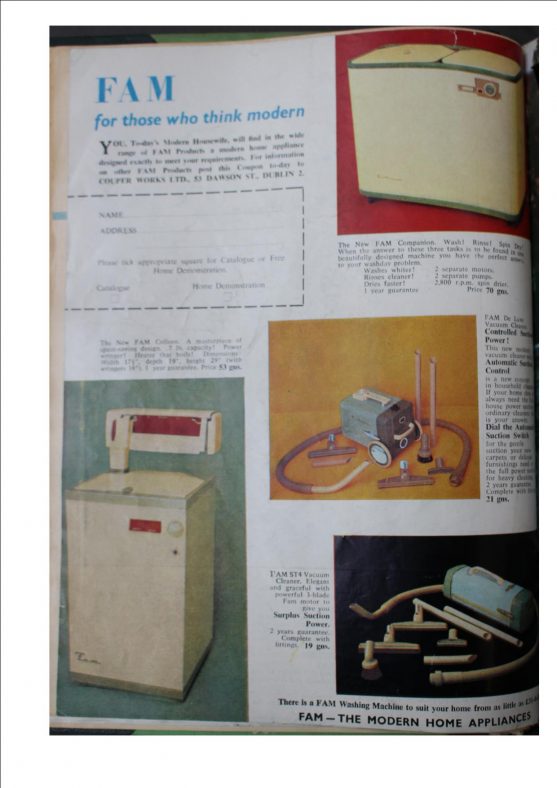 Verenigde FAM-Fabrieken was a Dutch product design company which had existed from the mid-1940s, selling washing machines and vacuum cleaners to both national and export markets. It was run by one Ale Kouperus until his death in 1966, with a main factory in Maarssen, close to Utrecht, and advertised its products in both Dutch and Dutch colonial newspapers (Brouwer 1968: 47, 1966: 6, 1950: 5, 1961b: 3). Again, these are promoted in the domestic market as ‘de allerbeste stofzuiger in Nederland!’ or ‘the very best vacuum cleaner in the Netherlands’ [Fig. 4], at a time when the country was a small open economy influenced by some American business methods, with Philips as the dominant appliance company, one of a number of cartels and agreements that dominated Dutch manufacturing (Poortman 1950, Sluyterman 2013). 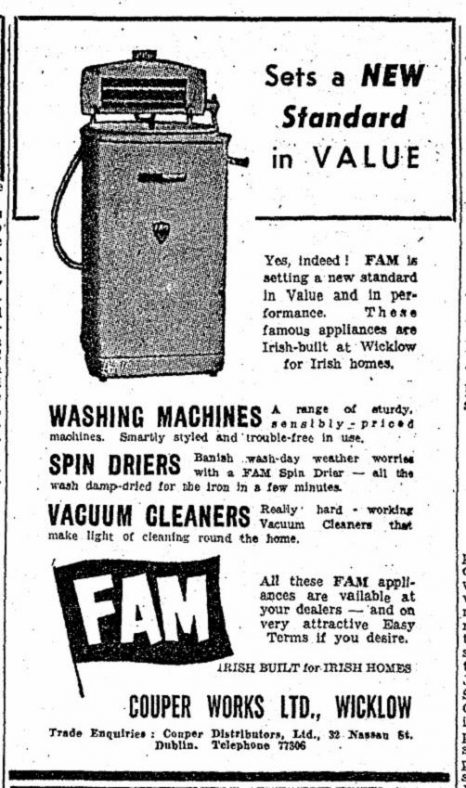 What brings FAM out into what Meroz and Gimeno-Martínez call ‘the expanded field’ of Dutch design and into the Irish myth was the setting up of an Irish company Couper Works in mid-1957, with capital of 50,000 Irish pounds, and numbers of Irish assembly staff sent to the Netherlands to train (1960: 13, Dáil Éireann 1960: 57, Meroz and Gimeno- Martínez 2016). The factory was managed by Dr M. Baradi, who was married to Kouperus’ oldest daughter (1966: 6, 1960: 13). Couper Works was one of ten companies which were enticed to set up in Ireland in 1956 and 1957 by the IDA, the Industrial Development Authority set up in 1949 to bring foreign investment into Ireland (Barry and O’Fathartaigh 2015: 476). The IDA was working with the idea of ‘import substitution’, encouraged by Sean Lemass, who was Tánaiste and Minister for Industry and Commerce intermittently throughout the 1950s. The idea of ‘industrialisation by invitation’ was adopted in 1956 and still forms the basis of Ireland’s low corporate tax regime today, and has politically been seen as a forerunner of the trade liberalisation of the 1960s championed by Lemass and TK Whitaker’s Programmes for Economic Expansion (Barry and ’Fathartaigh 2015: 460-61). A later Dutch newspaper article with his sons after Couperus’ death gives an alternative narrative, stating that the Irish factory was started in response to the Suez Crisis of 1956, as their father was concerned that the Netherlands could be invaded by the Russians, giving a geo-political impetus to the enterprise, as well as the possibility of ensuring that his Egyptian son-in-law was remote from possible conflict (Brouwer 1968: 49). 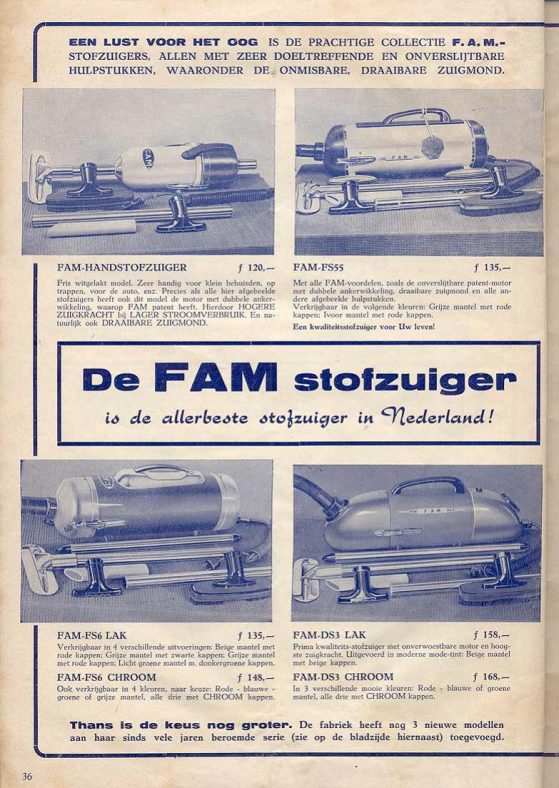 FAM brand washing machines and vacuum cleaners were advertised throughout the late 1950s in Ireland as economic and efficient appliances and as symbols of modernity, with newspaper advertisements continually mentioning the Irish roots of the brand, using straplines such as ‘These famous appliances are Irish-built at Wicklow for Irish homes’ [Fig. 5] (1958: 4, 1959: 9, 1964b: 14, 1964c). While they may not have used overt symbols of Irish nationality such as shamrocks and tricolours, they assert the Irishness of the brand, conflating the idea of Irish-built rather than Dutch, which is not mentioned here at all. This Dutch-Irish factory, possibly run by a Dutch-Egyptian, produced an appliance brand that  as increasingly promoted as Irish to a mythic level during the 1960s, when the factory was wholly appropriated as Irish, exporting ‘Irish washing machines’ to Austria (1961a: 6). FAM was included in the CTT Irish stands in the 1964 and 1965 International Hardware Trades Exhibition in London, alongside Waterford Ironfounders, Arklow Pottery and Carrigaline Pottery (1964a: 11, 1965: 10). The naturalisation of these Dutch designed appliances as ‘Irish’ is completed when they featured in an Irish language newsreel from 1962, covering the Ideal Homes exhibition in the Mansion House in Dublin (Irish Film Institute Gael Linn Collection 2017).