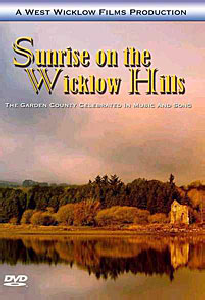 County Wicklow inspired John Millington Synge, gave refuge to freedom fighters, welcomed lovers to it’s hills and valleys and continues to provide tranquillity, peace and relaxation for its many visitors.

The loves, battles, disputes and matches of the Garden County have been commemorated in songs (some almost forgotten), which have long been part of the oral tradition of mountain men and mountain women.

Yes, yes, I know. You knew that already. Well, some  years  ago I came up with a mad idea. You knew that as well because you know that I’m always coming up with mad ideas. As smart as you are, I’ll bet you don’t know what it was. Well I’ll tell you.

Wicklow was the last county in Ireland to be instituted, more than 400 years ago. And on the four-hundredth anniversary of the foundation of our beautiful County I hit on the idea of making a DVD to remember, honour and preserve some of its precious stories and legends as told through its ballads.
I put the idea to Julie Phibbs, Director of West Wicklow Films, who seemed to think that it wasn’t all that mad. For months her team hauled cameras, tripods and a lot of expertise through the briars, ferns and rocks of County Wicklow.

The result is 57 minutes of footage, which — along with old photos and sketches — depicts some of the most beautiful scenery in the world.
This cinematic panorama is accompanied by the following audio tracks:

* SUNRISE ON THE WICKLOW HILLS – This is a classical song, which combines? “drawing-room splendour” with the feelings of everyday life.

* THE WICKLOW ROVER; – Cork had The Bould Thady Quill, its neighbouring county boasted of “The Limerick Rake” and Roundwood songwriter, Pat Molloy, felt compelled to immortalise our very own colourful Wicklow character.

* THE VALES AROUND CLOUGHLEA – A thumbnail sketch of West Wicklow life in the early days of the last century drawn, in words, by local songwriter Frank Farrelly. Priests, patriotism and pranks, they are all there.
* DERRYBAWN – This beautiful ballad indicates that Wicklow men are still as capable of love, loyalty and valour as were their ancestors.

THE BLACKBIRD OF SWEET AVONDALE – The sad and moving tale of? “the uncrowned king of Ireland” is given a new lease of life by award-winning singer Peggy Sweeney.

* THE FLOWER OF LUGNAQUILLA – One of our highest mountains is immortalised by this slow jig composed and played, on fiddle, by gold-medallist musician Rachel Conlan.

* MY WICKLOW HILLS SO GAY – An emigrant story from our own time told by a Ballyknockan songwriter.

* THE BANKS OF AVONMORE – The story of death on an alien battlefield and broken hearts in Wicklow, written by the late Peter Cunningham-Grattan (The Roving Bard)

* THE ROSE IN THE HEATHER/PAIDIN O’RAFFERTY (JIGS) – Played by Fuinneamh, under the direction of John McNamara.

* DOWN BY THE TANYARD SIDE – Composed by celebrated songwriter Ned Lysaght to console his friend Hugh Byrne who was the victim of his sweetheart’s cruel father.

* THE WICKLOW MOUNTAINS HIGH – An old sentimental ballad, which has been rescued from the jaws of obscurity.

* ANN DEVLIN – Pete St. John composed this lively yet tragic song, thereby ensuring that a brave Wicklow woman would not be airbrushed from history.

* THE WICKLOW VALES FOR ME – Even the Creator, it has been said, couldn’t make two hills without a valley. Perhaps that is why man-of-God, Father Butler, a Donard curate in the last century, gave our mountains a rest (in a literary sense) and penned this tribute to the hollows in between.

* PROVIDENCE/GRAVEL WALKS (REELS) – Played by Fuinneamh under the direction of John McNamara.

The artists featured include Celtic Mist, Shay Eustace, Fifth-generation tenor Denis Molloy, Pianist Bill Kearney, Billy Meade, Fiddle-player Rachel Conlan, Songwriter/singers Patsy McEvoy and Mick Brady and a nine-piece band Fuinneamh. Fuinneamh is the Irish for “energy” and when you hear them play you’ll agree with the choice of name.

Also featured are a number of interviewees who know anything that’s worth knowing about County Wicklow, its songs and songwriters. These include 94-year-old Mona Power recalls her memories of Peter Cunningham-Grattan (The Roving Bard) an enigmatic songwriter and musician who travelled the roads of Wicklow until his death in 1956. Father Padraig McCarthy tells us about the fruits of his research into this prolific man-of-the-roads who kept his cards close to his chest as far as his origins were concerned.

Senator Labras O ‘Murchu, Director General of Comhaltas Ceoltoiri Eireann, gives us the benefit of his knowledge of songs and song-writing in Wicklow and beyond.

Seamus MacMathuna, a great authority on the Irish ballad regales the viewer, from a cheery fireside, with stories of composers past and present.

Mick Brady, reveals where he got the inspiration for an emigration song and singer, writer and historian tells some lesser-known facts about Ann Devlin.
Cover of ‘Sunrise on the Wicklow Hills’ DVD.