The county of Wicklow is so named after its principal town. Although the name comes from its former Norse settlers, there is some confusion as to whether its origin is in Viking Alo (Viking meadow) or Wiggingne Lough (the lake of ships). Whichever is the case, the name Wicklow has been passed down to us. In Irish the county is known as Cill Mhantain (Mantan’s Church). Saint Patrick on his return to Ireland is reputed to have landed at what is now Wicklow town. The point of his landing is thought to be Travelahawk beach, near the Black Castle. He and his followers were stoned by the hostile locals. One of his priests received a blow in the face and due to the resulting deformities he became known as Mantan or Gubby. Later the unfortunate priest was to return and establish a church in the area. 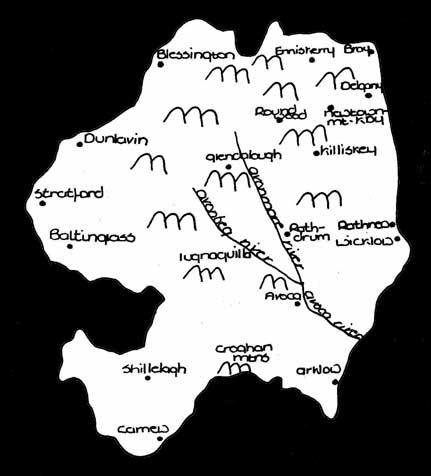 Comprising 494,704 statute acres, the county stretches forty and a half miles from north to south and thirty three from east to west It is divided into eight baronies, through which the county was governed since the sixteenth century. Bordered to the north by Dublin, to the south by Wexford and to the west by Kildare and Carlow, the county’s physical shape has always had a great impact on its history and has divided the county into three distinct regions; the low lying strip along the east coast, the mountains and valleys of the centre and west and the southern less mountainous area. The eastern lowland strip has always been the most populous and fertile region. Stretching from Bray to Arklow, it contains the majority of urban settlements and has the longest history of habitation. The ancient roadway from Dublin to Arkiow has provided this area with a route to the rest of the country. Over the centuries this route has been used for trade, conquest, immigration and emigration, each adding to the culture and history of this region and, in turn, the whole county.

The earliest recorded mention of this region is in the writings of the Greek cartographer Ptolemy in circa 130A.D., who was probably working from earlier sources. The site of today’s town of Wicklow is thought to be Manapia on his charts. The only surviving name is that of the Avoca river, spelled Ovoca by Ptolemy (the exact location of many of Ptolemy’s grid points are a matter of some dispute), though this does not show the same continuity as it would initially suggest. The river was so named in the nineteenth century by a local landlord who, also being a classical scholar, was no doubt inspired by the Greek’s records. 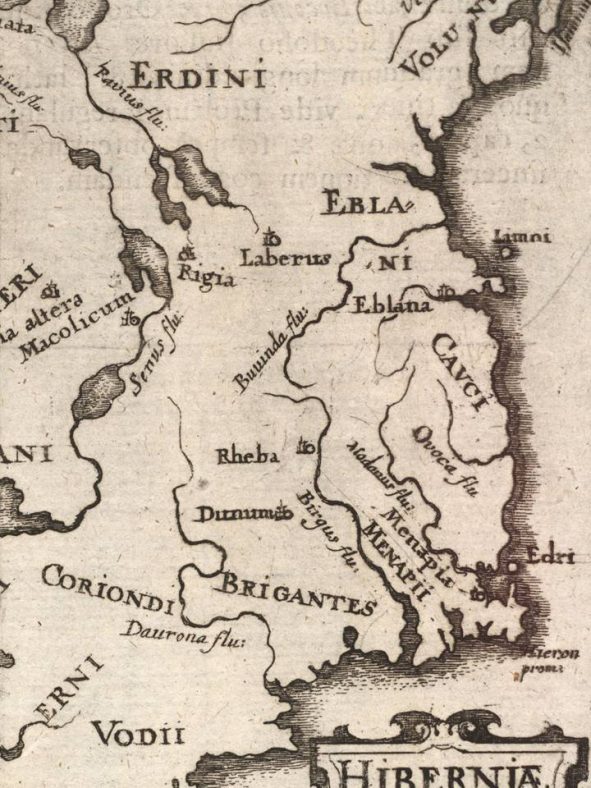 Here, along with the southern region, we find the remains of some of the many castles built during the sixteenth and seventeenth centuries in order to extend the influence of the British crown and protect the lives and properties of the planters. The most well-known is the Black Castle in Wicklow town which, although it predates the sixteenth century (its final stage was completed in 1375 by WilliamFitzwihiam) was to play no small part in the subduing of Wicklow’s Gaelic clans. Other castles of this time were situated at Castlekevin and Grange. Being a narrow strip of calm fertile beauty on the edge of a large rugged mountain range, it has often attracted comment from visitors, none more memorable than Jonathan Swift’s description of the county as a “frieze cloak trimmed with golden lace” (1).

A Land of Mountains, Rivers, Lakes and Valleys

By far the largest area in the county is the central and western region of mountains, rivers, lakes and valleys. The rugged beauty of these uplands and the contrasting lowlands have helped give Wicklow the name Garden of Ireland. Apart from its valleys and an area around Baltinglass, this entire region is over five hundred feet; in fact about one quarter of the county in total is over one thousand feet. Starting in Dublin, these granite mountains run down through the whole county, rising at their highest point, Lugnaquila, to 3,039 feet, thus crowning the most extensive mountain range in Ireland. This range is intersected diagonally by a number of great glens, most notably Glendalough, Glenmalure and the Glen of Imaal, which have all played their part in Wicklow’s history. It is in these highlands and the lakes therein that some of the most renowned rivers in the country rise. The Kings River, joining the Liffey (at what are now the Blessington lakes) and the Meeting of the Waters, where the Avonmore and Avonbeg join to form the Avoca. 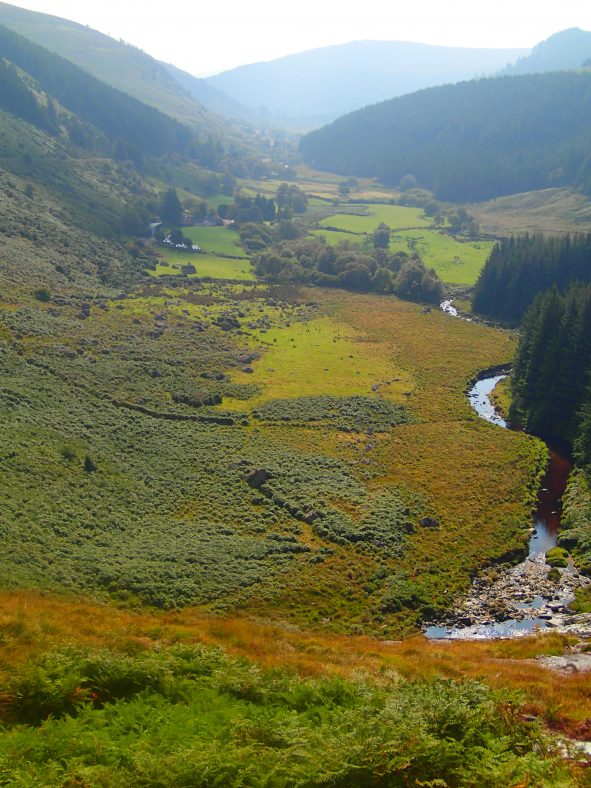 Although Ptolemy’s record of eastern settlement predates any other written evidence of settlement in Wicklow, the many archaeological remains concentrated in the peaks and valleys of this region predate Ptolemy by thousands of years. However, few of these prehistoric sites were places of habitation. Like ancient civilisations the world over, Wicklow’s early inhabitants seem to have used their mountains as places of worship, burial and refuge. Passage tombs such as those at Seefin (in the extreme northwest of the county), Tournan near Dunlavin, and Baltinglass are to be found over a large part of Ireland north of a line from Wicklow to Sligo (with a few exceptions in Cork and Waterford). These date from between 3,200 B.C. and 2,200 B.C. and are among the earliest human sites in the county. They consist, in their essence, of a stone passage leading to a stone chamber(s) and then covered by a mound or cairn of earth. Part of a European trend, Wicklow’s passage tombs are most closely associated with those of Brittany and Iberia.

By far the largest of Wicklow’s archeological remains are the hillforts, such as those at Brusselstown, Rathgall and Rathcoran. These sometimes enormous fortifications (Rathcoran encloses 10.5 hectares), encircle the summits of hills by constructing one or more ramparts around the hill’s contours. Not used as places of habitation, these iron age sites would have provided refuge for people and livestock during times of unrest. The area also includes stone circles (ritual sites circa 2,000 B.C.) and many neolithic burial mounds dating back to circa 2,400 B.C. 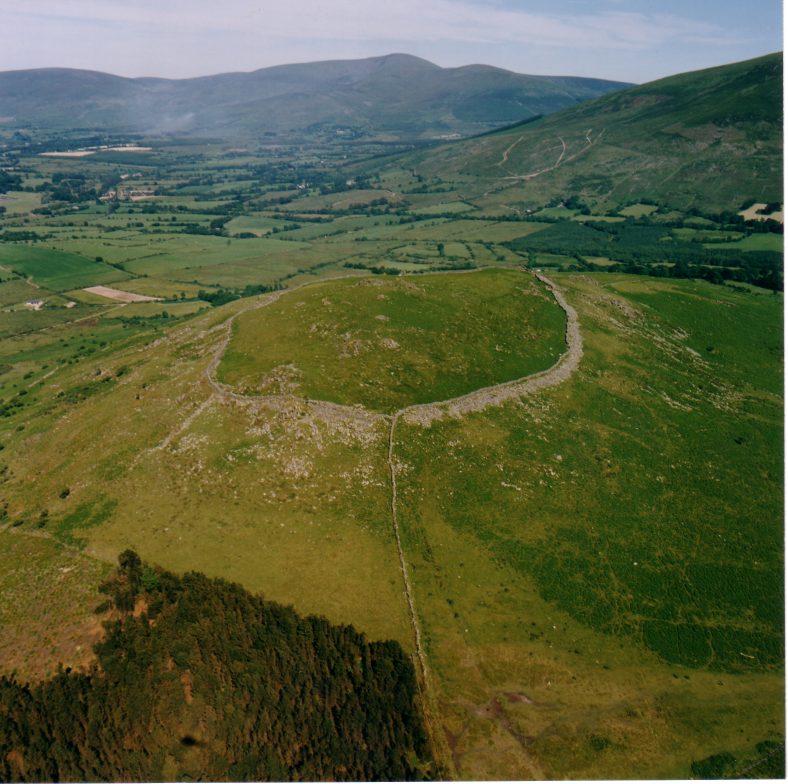 In the historic early Christian era, this area was also used as a place of retreat and worship. The mountains played host to ascetics and hermits, but most importantly it was here that the great monastic settlement of Glendalough was sited. Founded sometime in the sixth century by St. Kevin, what was originally a simple abbey quickly grew into one of the great monastic cities of early Christian Ireland. Frequently plundered by the Vikings because of its wealth, it was to survive as a diocese until it was united with Dublin in 1216. In 1398 it was totally destroyed by Crown forces, never to recover its former glory.

As can be seen from any map of the county, the southern region is in effect almost cut off from the rest of the county. If it can be said that west Wicklow has more in common with Kildare and Carlow than with the coastal towns of the East, then the same can be said about the southern region’s relationship with counties Carlow and Wexford. However, the Derry river valley ensures that it is not entirely cut off from the rest of the county.

Most famous in former times for its great oak woods, in particular around Shillelagh and Carnew, these large Iracts of wood aided the prosperity of south Wicklow. This area is also quite elevated, although there are no great peaks. Its many rivers have ensured its fertility, in particular the western section along the Slaney river valley. This fertility allies it to the great farming region of Wexford and Carlow. Its history is also closely connected with these counties, being on the border of the Wexford Pale during the late middle ages (an area of land surrounding Wexford town that was securely controlled by forces loyal to the English Crown). Had history been different, this area could have been at the centre of the proposed county of Wicklow and Ferns in the sixteenth century. Its association with Thomas Wentworth (Lord Deputy from 1632-1640), the Fitzwilliam estates, centred in Coolatin but covering much of south and east Wicklow, and the 1798 Rebellion has ensured its continuing importance in the history of the county.

The text in this article is extracted from “The Last County”, a book produced by the County Wicklow Heritage Project and supported by Wicklow County Council and FAS in 1987.