You are here: HomenextTopicsnextTHE LAST COUNTYnextThe Last County - The O'Byrne's and the Shiring of Wicklow

The Last County - The O'Byrne's and the Shiring of Wicklow 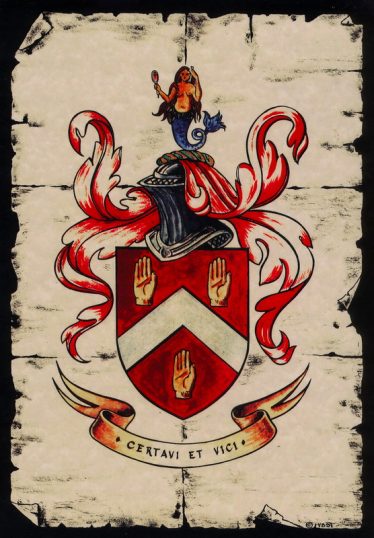 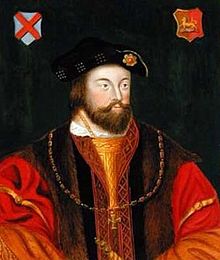 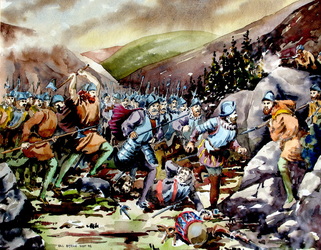 The Clan O’Byrne are reputed to be descended from Heremon, who along with Herbor were the leaders of a Spanish colony which established itself in Ireland about 1,000 years before the birth of Christ. The descendants of Heremon were the kings of Leinster.

Cahir Mor, Charles the Great, was elevated from the throne of Leinster to reign over the entire country in 144 A.D. It is from his grandson Feacha Baiceada that the O’Byrnes, O’Tooles and O’Kavanaghs, the three main Wicklow clans, are descended.

The O’Byrnes took their name, Branach in Irish, from their grandfather, Bran Mut. They occupied the northern part of Kildare stretching from Naas as far north as Maynooth. The O’Toole’s territory lay in southern Kildare and part of northern Wicklow. It was as a result of the Norman invasion that the two clans were driven off their lands and into the mountains of Wicklow. By 1202 they had located themselves along the seaboard of Wicklow from Newtownmountkennedy to Arklow and up to Glenmalure. It was not long before the two clans, who appear to have forged alliances with each other through intermarriage, declared war on the new inhabitants, the Anglo-Normans.

The fourteenth and fifteenth centuries saw the native Irish continue to harrass the invaders and open warfare, such as the burning of Wicklow town in 1306 when the O’Byrnes and O’Tooles conspired against the Butlers, was common. In the 1390s Roger Mortimer, Earl of March and Lord Lieutenant of Ireland, along with the Earl of Ormond, attacked the O’Byrne Country and took the O’Byrne castle at Wicklow town (The Black Castle). The O’Tooles counter attacked and defeated the English spiking sixty heads on the gates of O’Tooles’ castle at Powerscourt. The two clans marched against the English and killed the Lord Lieutenant in 1398.

The English authorities obviously viewed the O’Byrne Country as very hostile, as Lord Furnival was highly praised in 1414 for having the courage to march an army through O’Byrne territory without any dire consequences resulting either to himself or his men. Two branches of the O’Byrne clan emerged within Wicklow; the east branch called Crioch-Branach based at Kiltimon Castle, now Dunran Demesne, and the Gabhall Ranalagh which stretched from Lickeen to Aughrim and Bahana to Glenmalure. It was from the latter branch that one of the most famous of the O’Byrnes, Fiach Mac Hugh, belonged. By the sixteenth century the two branches occupied east and west Wicklow with the central mountainous area sparsely populated.

The O’Byrnes of Gabhall Ranalagh sided with the Fitzgeralds, in their conflict with their ancient enemy, the Butlers. Garoid Og Fitzgerald the Lord Deputy was a powerful and influential man and because he did not arrest the Earl of Desmond on charges of high treason, he was deposed and arraigned before the Privy Council of England. He escaped and was reinstated as Lord Deputy, no doubt due to his considerable influence in Ireland and he continued to strengthen his alliances with the Gaelic chieftains.

He was again summoned to England in 1534, but first appointed his son ‘Silken Thomas’ as Vice Deputy. Once in London he was arrested and held in the Tower. A false rumour to the effect that his father had been executed spurred Thomas to rebel against the King. Many clans, the O’Byrnes among them, joined this revolt and for a time were successful.

Powerscourt House, now the seat of the Wingfield family, which had cost £3,333 6s. 6d. to build was destroyed by the O’Bymes and O’Tooles and much of Kildare itself was destroyed by fire. However, Thomas was eventually forced to surrender and along with his uncles, was executed in London in 1537.

The English saw the system of alliances which had been formed between the Gaelic chieftains and the English nobles as dangerous and set about breaking up those bonds. Earl St. Ledger, the new Lord Deputy, sought to introduce a system whereby the chieftains would take their lands and hold them on letters patent from the English King, instead of the Irish system where the chieftains were elected by their clansmen.

Thadeus, chief of the O’Byrnes, submitted to the King and signed a treaty in 1535 in which he swore to be a loyal subject and not to support any Irishman against the King. He also requested that his territory be shired: “… the Byrnes of the mountains, in the thirty fourth of Henry the Eight, (1542), desired that their country might be made shire-ground and called the County of Wicklow” (1). These moves, and Thadeus himself, were rejected by the clan and a new leader was elected.

It is reported that Shane Mac Redmond O’Byrne and his son Hugh, grandfather and father of Fiach Mac Hugh, met Lord Deputy Bellingham in Glenmalure in 1548 to discuss peace terms. The authorities in Dublin were to remark in the 1550s on the good behaviour of the O’Byrnes. However Hugh Mac Shane O’Byme was building up the strength of the Gabhall Ranalagh and was prepared to harbour the rebellious O’Moores of County Offaly, who were related to him through marriage. Nevertheless, a pardon was granted to Hugh and Fiach for this action in 1566.

By 1578 the authorities were planning to shire Wicklow and form a new county of Wicklow and Ferns. Sir Henry Harrington was appointed seneschal of Wicklow in that year. The army of Lord Grey, the Lord Deputy, which was sent to subdue the county, was totally destroyed by Fiach Mac Hugh O’Byrne and his ally Lord Baltinglass at the battle of Glenmalure in August of 1580. The plans for a new county were no longer applicable to an area in open rebellion. The following January the English struck back, attacking Fiach’s house at Greenan, burning it and raiding his cattle. Troops were moved inland from the castles at Wicklow and Arklow and garrisons were established at Castlekevin and Kilcommon. However, by September Fiach was once again pardoned.

In 1594 Fiach was again in conflict with the authorities. Along with Edward Eustace, son of the Earl of Baltinglass, he had been involved in the rescue of several young Gaelic clansmen from Dublin Castle, including Red Hugh O’Donnell, Artand Henry O’Neill. The escape took place during winter and they followed a route through the Wicklow mountains leading them eventually to Glenmalure. Art O’Neill died of exposure and Red Hugh suffered so badly from frost bite that he had several toes amputated. They were given shelter by Fiach’s wife Rose O’Toole. On returning to Ulster Red Hugh O’Donnell was pronounced chief of his clan and soon rekindled the flames of rebellion which quickly spread to Leinster. Fiach and his sons joined these renewed hostilities.

It was during this period that Walter Reagh Fitzgerald, a son-in-law of Fiach’s, together with Fiach’s sons and stepsons attacked the castle of Sir Pierce Fitzjames in County Kildare. Sir Pierce, his wife and children were burned to death. Fiach publicly disassociated himself from this attack, which had provoked widespread horror among the English. Sir Pierce had been considered one of the most loyal of the Queen’s subjects. He had earlier offered, with some slight help from the crown, to apprehend the traitorous O’Byrnes but his offer was refused.

Similar offers were made by Sir Henry Harrington, Sir Thomas Masterson, the City of Dublin and other gentlemen of the Pale. All such offers were refused. Instead Fiach was made a Justice of the Peace and on visiting Dublin was accepted and “guarded with the Lord Chancellor’s sons. He was in fact pardoned seven times for his traitorous behaviour to the crown” (2). From this it would seem that it was not just military might on its own which had helped stave off the total conquest of the county until now by what would have been vastly superior forces, but the diplomacy, and the strong alliances which were established with people of power and influence in Dublin.

The Beginning Of The End For Gaelic Chieftans

The Lord Deputy, Russell, then attacked Fiach and managed to capture his wife Rose. Fiach tried to raise a new force from both branches of the O’Byrnes but most of the Crioch Branch had turned against him. In May of 1597, Russell once again marched against Fiach and entered Glenmalure as he had done the previous September, laying waste to the land. However this time it was believed that Fiach had been betrayed by someone who knew exactly where he would be on that Sunday morning. He was discovered by a Captain Lee, beheaded and his quarters sent to Dublin to be placed on the walls of the Castle.

Fiach’s sons, Phelim and Redmond continued the conflict and defeated Sir Henry Harrington in 1599, between Rathdrum and Wicklow at Deputy’s Pass. However the following year saw the new Lord Deputy, Lord Mountjoy, attacking and destroying Phelim’s camp. Great hardship for the O’Byrnes ensued. The defeat of the Irish in Kinsale in 1601 meant the beginning of the end of the old way of life for the Gaelic chieftains and the Flight of the Earls in 1607 sounded the death knell.

The time was now ripe to bring the O’Byrnes Country under the full control of Dublin Castle and it is generally accepted that the county was finally shired in 1606.

With this break up of the last bastion of Gaelic Ireland and the O’Byme clan the last county in Ireland was created.

Moves were made in 1606 to dispossess the traditional land holders, the O’Byrnes and the O’Tooles, of their lands in Wicklow. Phelim and Redmond O’Byrne were only given temporary grants to a part of Gabhall Ranalagh, the rest was declared royal lands. Phelim and his sons, Bryan and Tirlugh, fought this issue for many years, even going so far as to insist upon an inquisition being held to hear their case. However, a great deal of confusion surrounded the legal ownership of much of south Wicklow.

The ensuing years saw grants of former O’Byrne territory being granted to such men as Sir William Parsons, Sir John Hoey, Sir Henry Harrington and Sir Laurence Esmond. Phelim again petitioned the King in 1623 for the restoration of his lands and a commission of enquiry was established, but once again it found against him. In 1628 Lord Falkland, the Lord Deputy, was among those who received large grants of Phelim’s land.

After Phelim’s death in 1630 his sons, Brian and Hugh, continued to press for the recovery of their lands and in the following year they were suspected of a conspiracy to rebel. Meanwhile the land comprising the former Gabhall Ranalagh was changing ownership, as people like Sir Adam Loftus sold his buildings to Calcot Chamber for £10,000 in 1639. The following year Chamber sold land to Henry Temple and the Earl of Strafford.

By 1641 the O’Byrne holdings had been reduced to 20,000 acres, which in its former glory would have amounted to 75,000 acres. The final blow was dealt to the O’Byrnes of Gabhall Ranalagh in 1649 when Cromwell dispossessed them of everything as papist rebels (3).

Notes
(1) A discovery of the true cause why Ireland was never entirely subdued nor brought under obedience of the Crown of England until the beginning of his Majesty’s reign, Sir John Davies, His Majesty’s Attorney-General for Ireland MDCXII, PP. 267, 268.
(2) Calendar of State Papers 1601-1603, PP. 67 1-672.
(3) The above chapter would not have been possible without the assistance of Pat Power.