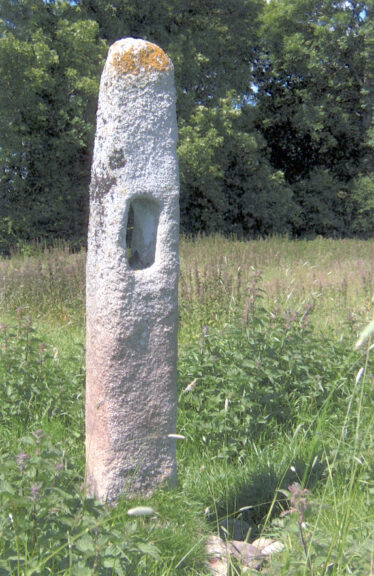 From about 800 A.D. onwards, marauding Vikings were seeking to settle and establish control in parts of Ireland.  By the 990s, Dublin was ruled by a Viking king, Sitric, The king of Leinster, Mael Morda, was his potential ally, as both leaders resented having to pay tribute to the new high king from Dal Cais in Munster – Brian Boru. Brian had to struggle hard to establish his authority in Leinster, and the decisive battle in this struggle was the battle of Glenn Mama. There are some doubts regarding the exact location of Glen Mama. Eoin McNeill suggested that the site was near Brittas, on the Dublin-Wicklow border. However, Joseph Lloyd placed the battlefield in the Rathcoole-Newcastle region in an area called Lyons, but others, including Fr. J. F. Shearman, have placed the battle in a valley near Dunlavin. Shearman was appointed as curate of Dunlavin in 1862, and recorded much historical and folklore-related material about the area during his tenure.

Local oral tradition in the Dunlavin area regarding the battle of Glen Mama remains strong. The valley identified by Shearman is known locally as ‘The Valley of the Black Pig’ and it runs roughly from the townland of Brewershill, about a mile from the present Dunlavin village, to the townland of Lemonstown, near the present settlement of Hollywood on the N81 road. There is also a local story about the ‘collar of gold’, which was reputedly buried with the slain Viking leader, Aralt, following the battle. Aralt’s burial place is traditionally held to be in the townland of Crehelp, where a six-foot tall standing stone reputedly marks the grave [see illustration]. This stone has a hole in it and is similar to some Viking holed stones found in other areas. Perhaps this fact lends some support to Shearman’s geographical argument and to oral tradition, which both take the Dunlavin area as the site of Glen Mama. While doubts about the site of the battle remain, it is interesting to note that in Ireland and the Celtic Church, G. T. Stokes wrote ‘No ancient battlefield has been more completely identified and followed in all its details than this one’. He placed Glen Mama in a valley ‘beside the ancient but rather backward town of Dunlavin’. Wherever the battlefield was actually located (and it may well have been the site adjacent to Dunlavin), it is certain that Brian Boru’s army was victorious, completely crushing the Viking force.

At Blackhill, there lies a long narrow ravine separating Dunlavin parish from Tubber at Friarhill. Its sides are precipitous and facing the north, and receiving little of the genial sunshine may well account for the name. This ravine reaches from the head of the valley that reaches from Dunlavin and at its termination under Ganleculana [?] offers a gentle ascent towards the mountains through Crehelp or Plezica, so that some few years ago the projected line of railroad from Sallins to Baltinglass through Dunlavin was to pass this way. The tradition of the great slaughter of the Danes in this glen was well remembered by all of the past generation, and by not a few of the present. This then is undoubtedly the site of Glen Mama, that is ‘the valley of submission’ (E. O’Curry), where in 999 Malachy, the king of Meath with his men and Brian and the forces of Munster attacked the Danes of Dublin, led by Harold [Aralt], the son of Annalaf, in conjunction with the forces of Leinster, when it is said six thousand of them were slain. This slaughter must have occurred by the quicker movements of the Meath and Munster forces, who likely seized the pass as their adversaries were approaching to get to the high level ground near Dunlavin. Thus it appears that they were unable to force a passage and many fell within the gorge itself, while the rest fled up the sloping ground over Crehelp by Kinsellastown to Lemonstown ford. Their retreat must have been most disastrous, as the graves where the slain were presumably buried are sometimes met even at these times most remote. A stand was seemingly made at Lemonstown ford, as every mound and field all around is filled with their bodies, so that people now suppose a cemetery must have formerly existed there. Harold killed with [?] retreat and ____ [?] avers that the old stone shaft of a cross at Ennisloe (the old cemetery of Crehelp) marks his resting place. The Four Masters quote an old poem on the battle: ‘They came to the valley of Mama and having no water, convinced they were forced to drink of the unhealthy pools and fought with the stones, lo and so the end of the battle. The victory was gained triumphantly by the kings as far as the northern woods, and they burned Dublin the beautiful after laying waste to the plain of Leinster. In Glen Mama no spring is to be found. In rainy seasons, ‘unhealthy pools’ appear, and the oblong slate flags cropping out from the rugged banks would form tempting and death-dealing weapons for a worsted foeman. The ‘northern woods’ were doubtless the impenetrable thickets whose name is still related in that of Hollywood, now giving its name to a large tract of territory towards the north. In the same annals, the ‘slope of the horsemen’ is spoken of as a locality near the scene of the slaughter. One can easily picture the warrior steeds careering across the slope of Crehelp to the ford at Lemonstown, presenting then as it did less than a century of a surface unbroken by fence or drain. In the retreat from Glen Mama, a party of cavalry fled up through Glenvicgelia [?], and in crossing the Monaviodht [?] near Tubber, they were engulfed in a quagmire, which was open to 1849, when it was closed by stones, at which time a quantity of large bones of cows or horses (with an elk’s horn measuring four feet) were spewed up to the surface, being displaced by the stones and rubbish which was thrown in. Another informant told me that the fight began under Blackhill, and the battle was waged to Horsepass on the Liffey, the line of which is across Crehelp.