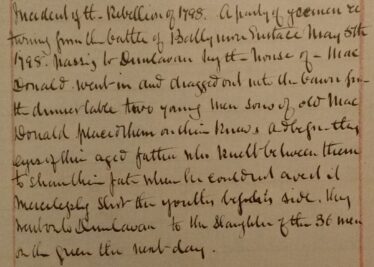 This diversion looks at Fr. J. F. Shearman, and the material contained in the Shearman Papers. The illustration shows a small extract from volume seven. However, be warned in advance that today’s piece contains sectarian overtones – but remember that these excerpts are in Shearman’s own words, which reflected his own perception of the situation in Dunlavin parish in the 1860s. Even allowing for bias in the source though, the Shearman Papers provide a very rich vein of historical material on Dunlavin!

A chronicler of Dunlavin parish.

John Francis Shearman was born in 1831 at 19 High Street, Kilkenny. He was ordained at Maynooth in 1862 and took up his first curacy at Dunlavin. Shearman remained in Dunlavin for five years (1862-1867) before moving to Howth. He became parish priest of Moone in 1883, where he died two years later in 1885. He is buried under the floor of the chapel in Moone. Shearman’s magnum opus was ‘Loca Patriciana’, which was published in 1879. However, much of his earlier work was never published, and Fr. John O’Hanlon meticulously pasted Shearman’s handwritten manuscripts into volumes that were later bound.[1]

Volume seven deals exclusively with Dunlavin, and much of volume seventeen also relates to Shearman’s time in Dunlavin parish. Much of Shearman’s work relates to early Christian relics around Dunlavin, but his wide-ranging interests made him record all kinds of things varying from the site of the battle of Glen Mama to material relating to the executions on Dunlavin green in 1798. Apart from antiquarian and historical writing, the Shearman Papers also give us a picture of the Dunlavin area during his own time there. Shearman went out among the people and collected many stories about folklore, ghosts and popular religion (including the holy well at Tournant). He also gives townland by townland statistical breakdowns of farms, landholdings, valuations etc. during the 1860s.

A ‘statistical memoir’ of Dunlavin parish

Writing in 1862, Fr. Shearman gives what he calls a ‘statistical memoir’ of Dunlavin parish. He states that the parish comprises over forty thousand acres and contains a Roman Catholic population of about 4,000.[2] He deals with the events of 1798 and continues:

‘Since then, the systematic persecutions and evictions of hostile proprietors and Orange agents have depopulated Imaile [Imaal] and introduced Protestants from the obscure nooks and corners of neighbouring counties to usurp the places of the Irish Catholics who were themselves, a little more than a century before, the proprietors in fee, while the few who were tolerated were driven up the mountainsides’.[3]

One intriguing reference to the local gentry made by Shearman concerns Lady Synge Hutcheson (a landowner in Imaal) who ‘essayed to establish a new religion and entailed on herself the ire of the parson as well as the priest. She kept a milk-white stud to carry the Messiah who she still expects to establish the millennium’.[4]

Shearman mentions the cross-county boundary links that existed in Dunlavin village, stating that many people from Gormanstown and Kilcullen parish [both in Co. Kildare] attended mass in Dunlavin church.[5] He says that the district of Dunlavin has been ‘scarcely more fortunate’ than Imaal with regard to Catholic depopulation.[6] He provides examples of many townlands where Catholic tenants have been driven out, among them Rathsallagh, where the only Catholic to hold land was Mr. John Norton.[7] Incidentally, Norton was among the witnesses who gave evidence to the Devon Commission in 1845 (witness 964). Although he seemed to be reticent with regard to some answers – he probably did not want to give too much information to the commissioners – his testimony gives us a good insight of life and landholding in Rathsallagh and around Dunlavin in the 1840s. Many of the points made by Norton regarding leases and improvements made to the farm by tenants were reiterated by Mr. Edward Fenlon to the Besborough Commission in 1881, indicating that the situation had not improved a lot despite the 1870 Land Act.[8]

Despite the evictions, Fr. Shearman tells us that in the 1860s:

‘On the whole in the Dunlavin part [of the parish] they [Catholics] are holding their own and even advancing apace, while in Donoghmore and Donard they aren’t so well circumstanced, as farms when vacated, as a general rule are given to Protestant adventurers which has had a demoralising effect on the Catholics’.[9]

Shearman contrasts this demoralisation with ‘the uncompromising spirit by which they were animated during the struggle for emancipation, the abrogation of the tithes and the repeal movement’.[10]

According to Shearman, the Catholic inhabitants of the Glen of Imaal suffered a lot at the hands of Michael Fenton of Ballinclay, whom Shearman describes as ‘a man actuated by a steady determination to uproot every Catholic’.[11] Fenton as evidently targeted by Daniel O’Connell as Shearman states that he was ‘abused from great obscurity into great notoriety by the late Liberator’.[12]

Shearman’s observations on the evictions of Catholics and their general position in the upland part of Dunlavin parish ends on a gloomy note as he writes:

All this done in a remote glen of Wicklow in this year of grace 1862 – too remote to be reached by public opinion – a feeling well-nigh strangled in this region of serfdom. Should there be a man so daring as to raise his voice above the common herd he is set down as a turbulent spirit and entails on himself a persecution of the lowest and meanest character unworthy of the noble proprietors whose only excuse is that they act thus led only by the invidious whisperings of avaricious agents and their cowardly myrmidons.[13]

This passage shows us some of both the strengths and weaknesses of the Shearman Papers as a source. Firstly, we must beware of bias, as the priest is obviously sympathetic towards the plight of the Catholics. I do not suggest that there was no plight for these Catholics, but Shearman’s language is very emotive. However, secondly and on the other side of the coin, because these writings were never meant for publication Shearman felt free to use such emotive language and to write with a frankness that would not have been possible if the material was to be published. This frankness contrasts with the polished, restrained, erudite language used by Shearman in other parts of the Shearman Papers, notably the manuscript text of ‘Loca Patriciana’[14] and later articles in volume seventeen.

Shearman also gives an account of the schools in the district. Cryhelpe school was built by the late Baron De Röbeck partly at his own expense but ‘principally with the free labour of his tenants’.[15] The teacher, a mistress, in Tynte Park school (supported by Joseph P. Tynte for the children of his workers) was a Protestant and the children here are ‘remarkable for their negligence and apathy in the attention to their religious duties’.[16] Shearman also notes that a Protestant school and an Orange lodge were established at Knockanarrigan.[17]

Dunlavin village contained about 95 Catholic families and about 25 Protestant ones in 1862, according to Shearman. John Harrington, who was father of ten children had property valued at £136.10.0.[18] Indeed, large families were the norm as one can see by looking at the townland by townland breakdown of Catholic inhabitants given by Shearman.[19] In the ‘valuation’ column of his statistical memoir, Shearman provides clear evidence that the cottiers were not quite totally wiped out by the Famine. John Carroll and James Cleary are described as ‘cottiers’.[20] Charles Ennis was a ‘workman’ (with no valuation),[21] while John Doyle resided in a ‘cabin’.[22] Despite sizable losses during the famine, a sizable number of the ‘cosmhuintir’ – the class that historian Maura Cronin has termed smallholders, cottiers, labourers and the nameless poor – evidently remained in situ in the parish.

Volume seven of the Shearman papers gives an even more detailed townland by townland account of the Dunlavin area. Much of the ancient history, legends and archaeological features of the area are noted, but much of the information also relates to Shearman’s own time in Dunlavin. A small taste of just a few entries in this volume follows:

There are many other pieces of information contained in the pages of the Shearman Papers. They provide a cornucopia of information for the local historian of Dunlavin. In addition to Dunlavin, there are also sections Tober, Crehelp, Donard, Rathsallagh and Freynestown. The snippets of information in this article provide a taster, but do not amply demonstrate the variety and detail of the information recorded in the writings of Fr. John Francis Shearman, a man to whom historians of the Dunlavin region certainly owe a debt of gratitude!