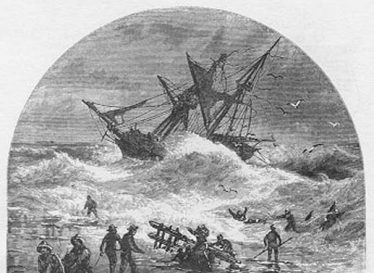 An Indefinable Feeling of Fear and Awe

Throughout the second week of November, 1852, as London prepared for the splendid state funeral of the hero of Waterloo and reluctant Irishman, the Duke of Wellington, a series of extreme weather events broke over the east coast of Ireland. On Saturday, 6 November, a violent gale in the Irish Sea delayed shipping and drove vessels ashore, and the mail steamer, failing to reach Holyhead, had to jettison its cargo of cattle, although its passengers escaped unhurt.  Three days later, in the early hours of Tuesday, 9 November, sleepers in Dublin and the surrounding counties  were awoken by a low rumbling noise and a strong vibration, subsequently identified as an earthquake. Windows shook violently, house-bells rang, and delph, glasses and candlesticks ‘rattled audibly’. Some ‘fancied they heard the floors of their rooms creak beneath a heavy footstep, and on the minds of most of those who were thus abruptly awoke from their midnight dreams an indefinable feeling of fear and awe was impressed.’ The shock was strongly felt at Bray, Kilruddery and Enniskerry. ‘At Powerscourt … and at other mansions in the same locality, there was a violent tremulous motion’, but no injuries, and a correspondent from Kilbride reported that ‘the house rocked in a most fearful way – the bed pitched like a ship at sea – the clock stopped on the mantelpiece – jugs and basins danced a fearful jig.’ At Delgany, ‘some describe their beds as being violently rocked for the space of half a minute or so; one lady heard her keys jingle on her chamber candlestick, where she had placed them on retiring to rest; a noise was also heard, like that proceeding from a heavily-laden wagon driven rapidly. It was also felt in the neighbourhood of Newtownmountkennedy. I trust’, this witness piously concluded, ‘this appalling event may lead many to put to themselves that all-important question – “Am I prepared to meet my God?”’

Scarcely had the sensation created by the earthquake subsided than the country found itself in the grip of infinitely more spectacular and terrifying conditions.  From Thursday evening, 11 November, and throughout the following day, gale-force easterly winds, driving rain and high waves battered the east coast, in what was described as ‘one of the most frightful hurricanes which has blown in the Irish Channel for the last twenty years.’ Portions of the east pier at Kingstown were swept away, and a 30-ton vessel moored in the harbour sank; the King Olive, lying at Burgh Quay, broke loose from her moorings, causing extensive damage to other ships moored in the vicinity and creating confusion ‘beyond all description’. Irishtown, Sandymount and Merrion were flooded, the sea invaded the railway line from Westland Row to Kingstown, delaying train travel, and shipping was prevented from leaving port. Shipwrecks were reported all along the east coast, with consequent loss of life. At Rush, two fishing trawlers and their crews were supposed lost; and in a small bay between Bettystown and Clogher Head a large, three-masted barque, the Minerva, bound from Liverpool to Berbice in British Guiana  with a general cargo, perished ‘almost within speaking distance’ of the helpless watchers on shore. Of the seventeen crew, all but two were lost.

Some of the worst effects of the storm were seen on the north Wicklow coast, off Bray Head. Early on Friday morning, the coastguards at Greystones observed a schooner, the Lady Harriet, close to the shore and clearly in difficulties, with her crew – five men in all – lashed to the masts. Unable to offer assistance, they could only watch as the vessel was battered by the waves and a force-10 gale. At high water, some six hours after that first sighting, the foremast went overboard, and with it four of the sailors. The captain alone remained, clinging to the mainmast, and sheltered to some extent by a portion of the sail. At length, he, too, was swept away, and disappeared from view. To the astonishment of witnesses, however, he reappeared a few minutes later, having somehow reached the shore, but almost immediately was swept back into the water. Again, he regained his balance, and desperate efforts were made to reach him with a rope. But one final, terrific wave overtook him, sweeping him off his feet and into the raging sea, from which his body was recovered some hours later. One of the crew was picked up still alive, and taken to the house of ‘Mr Scallin’ (probably Matthew Scallion, at Killincarrig), but died the same night, and the bodies of two more men were washed ashore on the following day. All were believed to be Welsh.

This was not the end of the day’s casualties. At six o’clock on the morning of 12 November, as the Lady Harriet’s crew still struggled to control their stricken vessel, the brig Betsy, on her way from Maryport to Dublin with a cargo of coal, went aground less than a mile away, and within half an hour began to break up. While the crew reached shore without mishap, the sixty-seven year old master was carried off by the waves, but his son, jumping in after him, brought him safely to land. All were taken to Mr Graves’s farmhouse at Kilcoole, where they were cared for. Meanwhile, a third vessel, the New Valiant, a schooner carrying grain from Portmadoc to Dublin, came ashore at Bray Head with her mast cut away. ‘No intelligence’, as the newspapers chillingly reported, ‘could be gained as to the fate of the crew.’

By Saturday morning the fury of the gale had abated. Ships which had ridden out the storm in harbour made ready to set sail, among them the Duke of Cambridge, chartered to convey nearly 250 troops stationed in Ireland to London to take part in the Iron Duke’s funeral procession. Other vessels feared lost arrived safely in port, and news came from Howth that the fishing crews believed drowned had, in fact,  found shelter there.  But the devastation wrought by six days’ ceaseless rain and the violent gales of the previous two days was evident in accounts coming in from all along the east coast of extensive flooding and damage to buildings and communications, of the impact on livelihoods, and of ‘quantities of drift timber and portions of wreck which continued to be cast up along shore at every tide’. Most poignantly, came reports from Greystones and elsewhere of the loss of life, and the stories of those nameless crewmen washed up on the north Wicklow shore in a storm described by contemporaries as one of the worst in living memory.

With thanks to Denis Slattery, who first drew the events of 12 November to my attention. This account is based on newspaper reports, 12-27 November 1852.