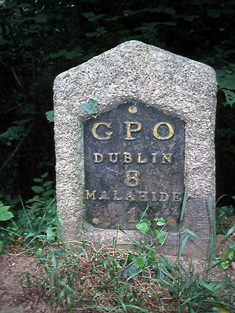 In the years gone by, milestones were a familiar and informative sight along our roads.  Sadly with the widening of roads and their replacement of metal signposts, they have now almost disappeared.  The milestones (Latin Milliarium, 1,000 paces) do not usually occur every mile but at crossroads in towns and villages.  They can be a welcome sight with assurance that you are on the right road and also indicate the miles you still have to travel to the next town.

Some countries used them to signify the centre, or a starting point of importance.  They were used extensively throughout the Roman Empire and in the centre of Rome there used to be a Golden Milestone that was said to mark the centre of the empire.  This gave rise to the expression “All roads lead to Rome”.  This may have led to the erection of a zero milestone in Washington to signify that all American roads started from the capital of the United States. 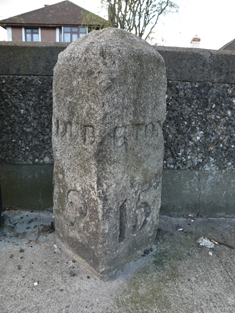 London has two starting points, one for the time and the other for distance.  The meridian is the starting line for worldwide time and a plaque at Charing Cross London is the starting point from which the distance to all cities and towns in England are measured.  The distance to cities and towns in Ireland is measured from the GPO (General Post Office) in Dublin.

As an historical point of interest, Wicklow has an ancient connection with Queen Eleanor of Spain, wife of Edward I of England.  When she died, King Edward set up crosses in a number of places between Wales and London, the most noted being the one to Queen Eleanor at Charing Cross.  In documents relating to Ireland 1285 to 1292 we read that “€60 of silver to be expended on carpenters for the timber of Eleanora Queen Consort, and carriage of the same out of the woods of Newcastle the Mackingen and Glencree by sea to the Queen’s castle of Hereford in Wales”.  For hundreds of years oak was exported to England to build palaces, Churches and ships.  I understand there are still Irish oak beams in Salisbury Cathedral and also the beautiful ceiling and roof timbers of the chapter house of Canterbury Cathedral.  Irish milestones are still to be seen mostly in the west and in Sligo in particular. 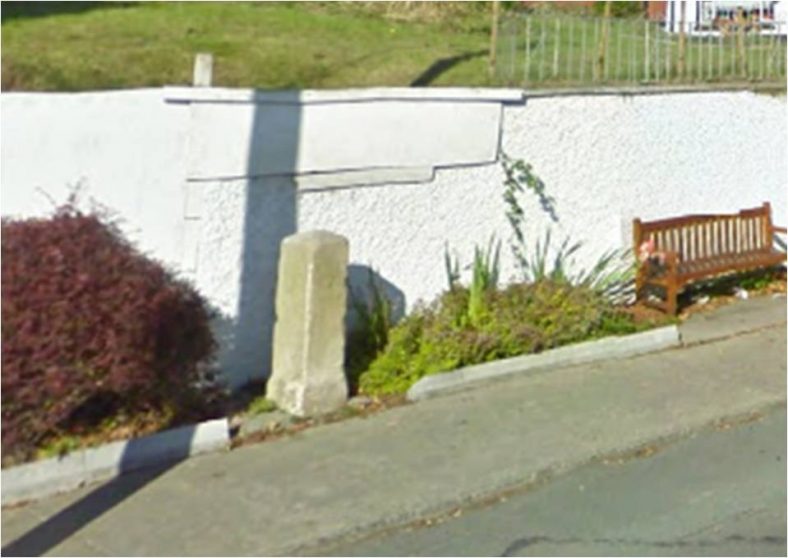 The milestone in Newtownmountkennedy

People tell me there is a milestone in such a place but when I go to visit the spot it is usually no longer there.  One of the more interesting local ones is opposite the doctor’s surgery in Newtownmountkennedy.  The building there was once an old coaching house and it is appropriate to have a milestone close by.  It is a square granite stone about 4 ft tall with sun rays on the domed top and has the distances in Irish miles to Dublin, Wicklow and Bray.  One side reads “From Dublin 17 miles” another side reads “From Wicklow 7 miles” and the third side reads “From Bray 5 miles”.  There are two more milestones close to Newcastle.  It should be known that they were Irish miles and not statute miles and measured not to the GPO but to Dublin Castle.