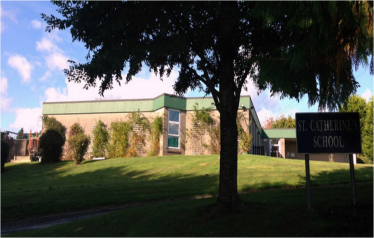 The total picture of schools in the Parish would be far from complete without mentioning the excellent facilities provided by St. Catherine’s Association Ltd.  The Association is a non-profit making organisation which provides education, training, healthcare and residential and respite care to clients who have intellectual and other disabilities.

The name St. Catherine’s seemed to be appropriate for the following reasons.  John Cromyn, first Norman archbishop of Dublin conferred the tithes of Killadreenan and Newcastle church to the nuns of the Monastery of Grace Dieu in 1185.  They were involved in the education of young ladies of the Pale.  As well as this early link with education, close by there is St. Catherine’s Holy Well.  So the name St. Catherine has a very distinguished past as well as a present and future place in education and care.  The following brief account of St. Catherine’s was written for the Association by the author after he had retired as Manager and Co-ordinator of Services and as Director of Sunbeam House Adult Services.

Before 1972, there was no education or training for the mentally handicapped in Co. Wicklow apart from a few children who attended a school for those with moderate learning ability in Glenageary.  A hopeful dream of what might be possible was put forward by concerned people and parents at a first meeting in the Royal Hotel, Arklow on a cold March night in 1964.  Fired by an unyielding determination to bring about a brighter, happier and more rewarding future for handicapped children and adults they inspired others to form branches in Wicklow Town, Rathdrum and Greystones and later in Bray and Newcastle.

In 1970 the Co. Wicklow Association was formed with an initial threefold aim.  1. To set up a Special School for those with moderate learning ability, 2. A Special Care Unit for the more severely handicapped, 3. Training and sheltered workshops for the adults.  It was a daunting task for a group of people without land, buildings, finance or official recognition from any state body.  However, where there is a vision and a will for eh betterment of our fellow human beings a way will be found to make that dream a reality.  Twenty-one years on the original aim of the Association and much more has been accomplished.

The first to open the door of opportunity and welcome was the Eastern Health Board who offered limited premises in the Nurse’s Home at Newcastle Hospital.  At the time, they little realised what a cuckoo they had taken in!

In June 1972, preparations were made to open a School for those of moderate learning ability in these premises.  The Mother General of the Holy Faith Sisters was asked and kindly agreed to release Sister Annette to take charge of the School.  Therefore, in September 1972 the School opened with twelve pupils.  Several handicapped and other severely handicapped children also arrived on the first day but had to be turned away until such time as facilities were provided for them.  The accommodation consisted of nurse’s bedrooms, which produced two small classrooms, a kitchen, a small office and staff room.  The staff consisted of two teachers Sister Annette and Mrs. Peggy Delaney, a nurse Mrs. Margaret Dillon and Housemother and cook Mrs. Nellie Burke.

It was called St. Catherine’s as it was adjacent to St. Catherine’s Well nearby.  The catchment area stretched from Arklow to Bray and to the mountains in the west of the county and this provided considerable transport difficulties.  Our estate car driven by my wife Jean did the round trip twice daily between Newcastle, Arklow, Avoca, Greenane, Rathdrum, Glenealy, Rathnew and Wicklow.  A mini bus collected the children around Bray and Greystones.

For the first three years, the School remained unrecognised by the Department of Education, leaving the Association responsible for all staff and running expenses.  It was a difficult time but the local branches and many friends never failed to raise the necessary funds to meet all the expenses.  The big breakthrough came in September 1975 when the Department of Education gave full recognition to the School, thus ensuring payment of teachers and running costs.  In the meantime, two years earlier, a special Care Unit to cater for more severely handicapped children had been in operation alongside the School with Mrs. Margaret Dillon in charge.

There were now 34 children in the School and 14 in the Care Unit.  More accommodation was required for the growing numbers being catered for and the decision was made to move the School onto the first floor of the Nurse’s home in refurbished classrooms.  It had always been the intention to provide a new purpose-built School and as the numbers increased to four teachers and over forty children, this became a necessity.  This new special School with all modern facilities was completed in 1983 and officially opened by President Dr. Patrick Hillary.

The next big step for the Association was to build a new modern special Care Unit with hall and therapy pool room adjoining the existing building.  After much planning and fund raising the lovely new building was completed in 1992 and officially opened by Dr. Mary Robinson.  Over the years, besides these big occasions, many other activities were taking place.  Some of these included activity clinics for very young children in five clinics around the country, summer holidays and summer camps, toy libraries, home visiting, physiotherapy, swimming and horse riding to mention a few.

Today, some 250 children are cared for by the Association.  In the beginning of 1977 negotiations were started with the Department of Health, The Eastern Health Board, The Department of Education and Sunbeam House to initiate adult services for the young adults who were then ready to leave St. Catherine’s School and Sunbeam House.  After protracted discussions, the Training Centre for adults was opened in Bray in October 1977 with an initial input of funds from the Association.  The countrywide services for adults now being provided is in itself another great success story.  In 1992 when Sleepy Hollow, run by Mrs. Peggy Delaney as a home for handicapped children and young adults closed, the Association, in conjunction with the Eastern Health Board immediately opened Kisch House on Kindlestown Hill, Delgany as a residential home for children requiring special residential care.  In a short introduction like this it is impossible to mention all the dedicated members of the Association, the work of the branches, staff, fundraisers, statutory bodies and indeed the many achievements of children over the years without whom there would be no story to tell.

The vision of the first founding members has indeed become a reality and all those associated with the many services provided by St. Catherine’s can gratefully celebrate this coming of age in 1999.  The almost daily volunatry and dedicated work of Mr. Harry Cullen form Rathdrum as chairperson of the 15 member Board of Directors has been largely responsible for the continued and increased responsibility of the work of the Association.  With goodwill, dedication and continuing vision we look forward to further years of care and training and a full life for the educationally and physical handicapped in Co. Wicklow.