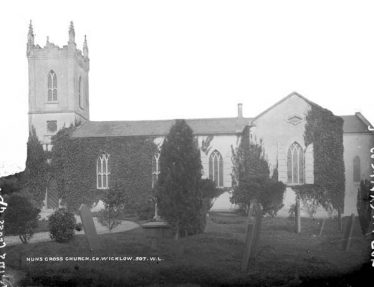 In a quiet country churchyard at Nuns Cross Church there is a shaded plot with a tombstone marker. The stone identifies the grave as that of ‘Captain Richard Jones, Pwllheli. Aged 42. Master of the ‘Elaine’ which was lost with all hands on Wicklow Banks. January 9th, 1883.’ The grave contains more than one body. There is also a graveyard at Newcastle Village on the south east coast which contains many unmarked graves. Some of those graves are also connected to the ‘Elaine.’ The ‘Elaine’ was destroyed and the crew lost without anyone knowing about it until the first light of dawn. The ship ran into trouble during the night, a dark night with little or no visibility. In previous years the Coastguard Station at Wicklow Head would have a man walk the beach while the Coastguard Station at Newcastle would do the same and the two would meet up in the middle. Such patrols stopped and the men now stayed at their stations. The service was undermanned and arms were now kept at the stations. One man, a night watchman Gilbert Goodman was going home to Castle Street at five o’ clock in the morning. He reached his house and looked to the north for a moment. He saw a light in the distance, he turned to call his son out, by the time he turned back the light was gone. he was certain that the light had come from a vessel on the water. He went to bed and thought no more about it, until the next day.

The Struggle For Life:

Mr. Goodman was unaware that at the time he spotted the light, a battle was being waged between life and death, in the waters just offshore. Death emerged the winner. The struggling crewmen of the ‘Elaine’ had abandoned the stricken vessel and tried to swim for shore. They were tossed around like rag dolls with timber and flotsam crashing all around them. There was no heavy sea running and no storm raging. Soon only the natural quietness of waves breaking on the shore could be heard and the badly damaged brig washing up. She immediately began to break up at an alarming rate. It later turned out that the vessel was a soft timber and copper bottomed boat and not ‘well found’ in anything.’ Her lifeboats were in a bad condition, but the crew had no time to launch them. The ship broke apart so violently that it was some time before the type of vessel that the ‘Elaine’ was, could be identified.

At first light a railway labourer named Rourke, who lived at the Killoughter station, came upon the smashed vessel and he raised the alarm at the Newcastle Coastguard Station. Within a short time the Receiver of Wrecks and the Chief of Coastguards had arrived and had taken control of the scene and the wreck. They quickly established a salvage crew to save whatever they could. For a while there was no sign of any of the crew, it was hoped that some had made it ashore. Throughout the day there were three bodies recovered from the water. The first body was nude except for boots and socks, 40 to 50 years old and was identified as First Mate John Jones of Pwllheli. The second body was that of a short man aged about 40 years. He was wearing a shirt, jersey and waistcoat. In the pocket of the waistcoat a watch was found which had stopped at 12.40pm. He was identified as the Captain, Richard Jones of Pwllheli. The third body recovered was that of crewman George H. Wilson, 21 years old, of 35 Onslow Road, Liverpool. he wore a shirt, trousers and waistcoat and the shirt was labelled Royal Navy Reserve. Of the others there was no sign. The bodies were taken to the Coastguard boathouse at Wicklow Town.

When word spread about the tragedy, the sailors and fishermen of Wicklow spoke amongst themselves in hushed tones. The ‘Elaine’ did not know where she was going, was off course and smashed into the bank? The brig had spotted railway lights on shore and mistook them for navigation markers and so were lured to their deaths? The Welsh crew were in unfamiliar waters, no knowledgeable crew would sail anywhere near the bank? Another ship had rammed them in the dark? There were many questions to be asked, some would remain unanswered forever. A key question which was also asked afterwards was how the vessel had broken apart so quickly? Coastguard Timothy Coughlan later stated ‘If she had been anything like a sound ship – she ought to have remained entire for a week.’  Coastguard John Lowrey stated ‘she must have sustained damage on the bank causing her to break up.’ The ‘Elaine’ carried a cargo of salt for ‘Para, in the Brazils.’ The owner of the brig was later identified as D. Richards, a Master Mariner of Barmouth, North Wales. Partial blame was also laid at the feet of the Coastguards for their changed rules and regulations and the ceasing of patrols on the beach.

The bodies were examined and a verdict of drowned was delivered. The decision was also arrived at that the ‘Elaine’ was either in a collision with an unidentified vessel or that she had run onto the Codling Bank and had become uncontrollable. Disabled, she had been abandoned, drifted in the swell to shore, while breaking apart quickly. Coastguards on duty at Wicklow Head and Newcastle testified to seeing nothing in the darkness that night. Gilbert Goodman testified to seeing a light on the water. The signal lights for the new railway from Wexford to Dublin were severely criticised as being a hazzard to mariners.

It was assumed that the bodies of the three men recovered from the water would be buried at Church Hill. This graveyard however had been deemed to be overcrowded in the previous year, 1882. It was then proposed to bury the men at Three-Mile-Water but as this was a Catholic graveyard, the burials could not take place there. The issue was solved thanks to the intervention of Rev. G. M. Drought, who provided space at Nun’s Cross Graveyard.

The bodies of the drowned men were removed from the Coastguard boathouse, draped with the Union Jack flag on the back of a cart, and were escorted to the graveside at Nuns Cross by an honour party of the local Coastguards. The men were then buried with an appropriate service.

More bodies were to wash up on the shore in the weeks following, including one off Shankhill. This body was in the water a lot longer and more decomposed, it was the body of an unfortunate unidentified sailor who had gone overboard from some unidentifed vessel. This was a common occurance in the days of sail. The bodies which were washed ashore in the area of Five-Mile Point were laid to rest in unmarked graves at Newcastle cemetery. There they joined other orphans, unknown drowned sailors and paupers in unmarked graves. The connection between both graveyards lies in the fact that both hold the remains of the crew of the brig ‘Elaine.’