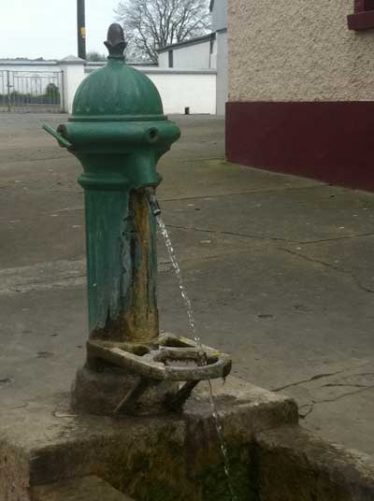 In the 1930’s county councils began a series of building houses for families who were living in bad quality houses. The cottages were built on an acre of land and consisted of four rooms, a kitchen, parlour and two bedrooms. Each cottage had an outside dry toilet, a pigsty and a hen loft built further over the yard. They were built in groups of two or four. There was no plumbing in these houses so an iron hand pump was placed on the local wells and the wells were upgraded and deepened where needed.

The pumps were constructed in a foundry in Dublin and the original colour appears to have been green, although some were black. The pump was a source of not only water but local news and gossip. Many of these houses were without water until the 1990s and the pumps were in continual use up to then.

Over the years people bought the cottages from the council and now the owners have full facilities. The pumps fell out of use and many disappeared from their original sites and into gardens as furniture. Once there were hundreds of these pumps scattered across the country, now there are a few marking the village center getting a fresh look for the tidy town season.  Some areas, we are lucky to say,the pump is still working well, especially in the winter when storms and ice blasts stop the electricity and its back to the village pump.