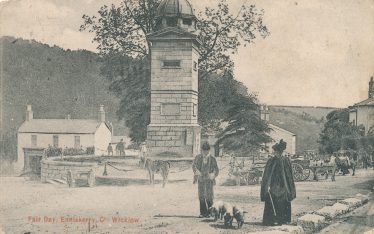 “Then and Now” is a project which celebrates The Gathering 2013.  The project was initiated by Wicklow County Council Library Service and adopted by each local authority public library service throughout the country. The series, a collection of six postcards, uses historic images from each Public Library Service’s Local Studies collection and pairs them with a modern photograph to show the dynamic or, indeed, timeless nature of each particular county or city. 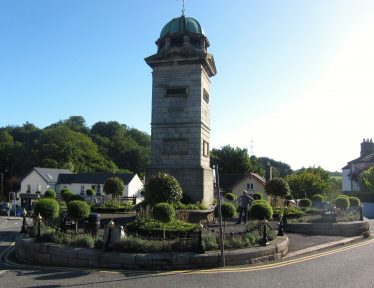 A number of towns and villages were chosen from around Wicklow which, it is hoped, provide the best geographic representation of our very diverse county.  Wicklow’s economic and social life is shown through Fitzwilliam Square in Wicklow Town in the early 1900s, Dunlavin in the 1920s, Greystones’ main street in the 1960s and Enniskerry fair ground, also in the early 1900s.  A quieter pace of life comes to the fore through the reflective tranquility of Glendalough in the 1950s which provides stark contrast to the bustling seaside resort of Bray c.1910.

As well as providing a snapshot into the past, these images demonstrate aspects of County Wicklow which have not changed over the years.  The modern view of Glendalough, for example, differs only in the attire of the people appearing in the photograph while the Esplanade in Bray remains a centre for gathering and festivities.  Although the proliferation of cars and other twenty-first century conveniences are evident in the modern photographs, the integrity of the buildings and the individual character of each area has endured through the years, and shows through in all the images. 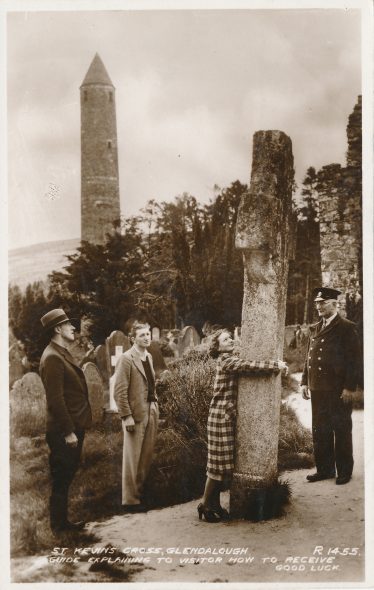 A national launch of the postcards was performed by Minister Fergus O’Dowd in October 2012. Groups and individuals organising Gathering events will be given a number of postcards to send to contacts abroad, encouraging them to come to Wicklow in 2013 for the Gathering event. Queries from overseas individuals or Gathering organisers in relation to the County Wicklow cards should be directed to library@wicklowcoco.ie as there is a limited print run.

All of Wicklow’s chosen images, both old and new, are now available to view in “Then and Now Part II”