Then and Now Part II

All descriptive excerpts are taken from Lewis’ “A Topographical Dictionary of Ireland”, 1838.

“Then and Now” is a project which celebrates The Gathering 2013.  The project was initiated by Wicklow County Council Library Service and the final cards for the county are displayed below along with a 19th century description of each locale.  The limited edition, printed postcards have been distributed to groups who are engaged in planning official Gathering events in County Wicklow but are also available at the end of this article to download and print.  To learn more about this project, read the “Then and Now” article also on the site. 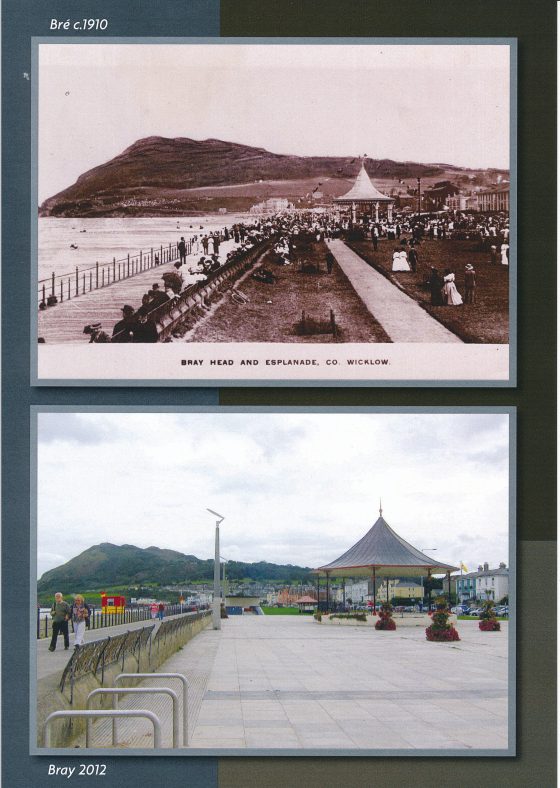 “Bray, a market and post-town, and a parish, in the half-barony of RATHDOWN, county of WICKLOW, and province of LEINSTER, 14 miles (N.) from Wicklow (by the sea road), and 10 (S.E. by S.) from Dublin; containing 3509 inhabitants, of which number, 2590 are in the town.  This place derives its name, originally Bré or Bree, signifying a “hill” or “headland”, from the precipitous promontory of clay slate and quartz, called Bray Head, which rises immediately on the south of the town to an elevation of 807 feet above the level of the sea, and from the singular indentation of its summit forms a well-known landmark to mariners.

… The town is situated on the Dargle or Bray river, which here forms a boundary between the counties of Dublin and Wicklow, and after passing under an old bridge of five arches, connecting the portions of the town which lie on different sides of it, falls into the sea a little below this place”. 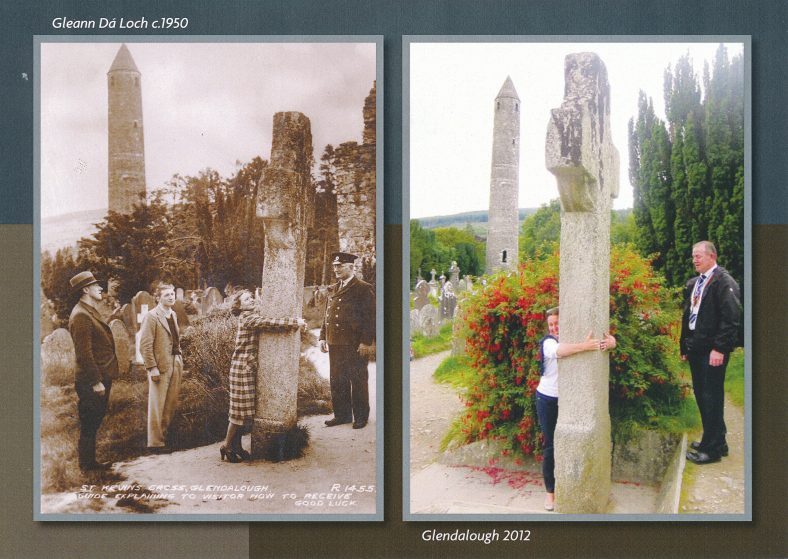 “GLENDALOUGH, a manor, in the parish of DERRALOSSORY, barony of BALLYNACOR, county of WICKLOW, and province of LEINSTER, 6 miles (N.W.) from Rathdrum; containing 1819 inhabitants.  This place, originally called Gleande, or “the town of the glen”, and also Glandelagh and the Seven Churches, derives its present appellation, Glendalough, or “the glen of the two lakes”, from the name of the valley in which it is situated.  This valley, which abounds with the most picturesque and romantic scenery, was part of the district of Imayle which, extending widely towards the south and west, formed the ancient territory of the powerful sept of the Otothils or O’Tooles, who maintained possession of it with uncontrolled authority till the 17th century.

From the numerous remains of its ancient religious foundations, from which probably it derived the name of the Seven Churches, and from the existence of one of those ancient round towers so frequently found in similar situations, it appears to have been a place of religious retreat prior to the introduction of Christianity; and from its early importance and secluded situation, it has long been regarded with feelings of veneration, as one of the most celebrated seats of ancient ecclesiastical institutions”. 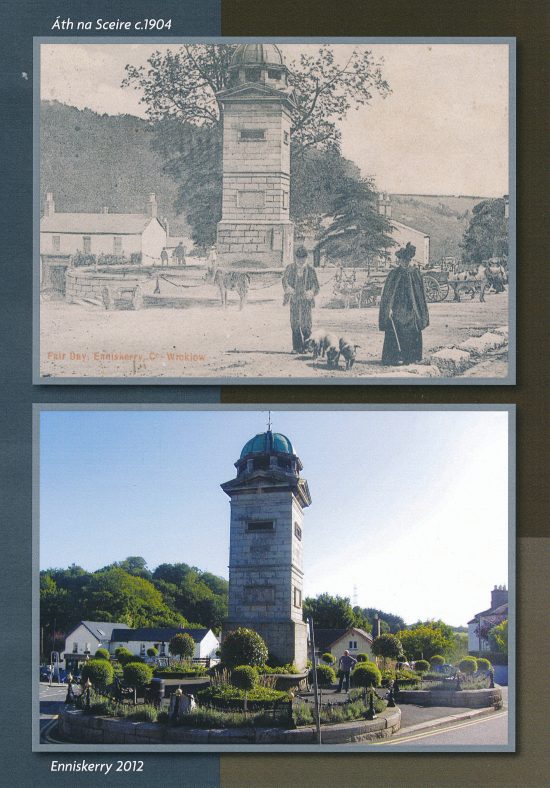 “Enniskerry, a post-town, in the parish of POWERSCOURT, in the barony of RATHDOWN, county of WICKLOW, and province of LEINSTER, 3 miles (W.S.W.) from Bray, and 10 (S. by E.) from Dublin, on the road from Dublin, by Dundrum, to Roundwood; containing 497 inhabitants.  This place, which is of modern origin, and has risen chiefly under the auspices of the noble family of Wingfield, Viscounts Powerscourt, occupies a beautiful situation on the acclivity of a hill rising from the bank of a mountain river called the Kerry.

It contains about 70 houses, most of which are tastefully built in the cottage style and inhabited by families of respectability; and from its vicinity to the beautiful scenery of the Dargle, the Powerscourt demesne, the waterfall, the Scalp, and other objects of general attraction, is a favourite resort for strangers and visiters [sic.] from Dublin, for whose accommodation two very comforatble hotels and losging-houses have been fitted up.  The air is extremely pure and mild, and the equability of its temperature is highly favourable to persons affected with pulmonary diseases; a mail and a stage coach and jaunting cars ply daily between it and Dublin”. 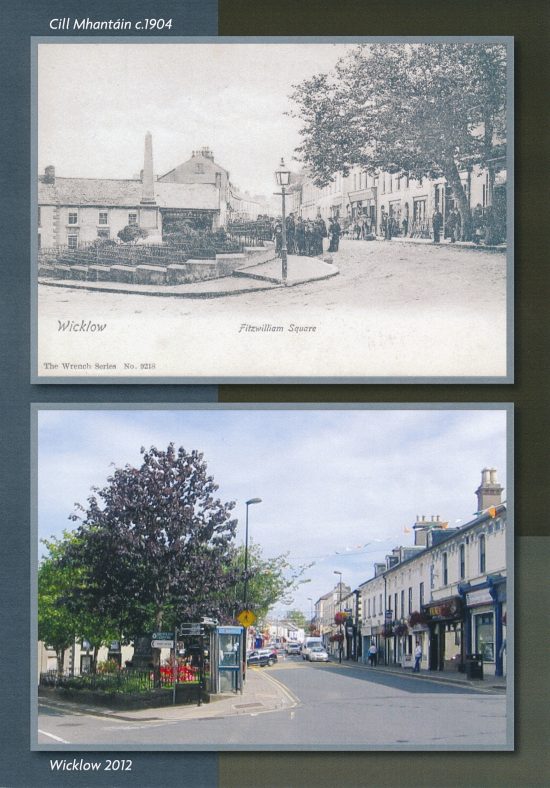 WICKLOW, a sea port, assize, borough, market, and post-town, partly in the parish of RATHNEW, barony of NEWCASTLE, but chiefly in that of KILPOOLE, barony of ARKLOW, county of WICKLOW, and province of Leinster, 24 miles (S.S.E.) from Dublin, on the coast road to Arklow; containing 2963 inhabitants.  Its ancient name Wykinglo, or Wykinglogh, is derived from its situation at the southern extremity of a narrow creek shut out from the sea by a long narrow peninsula called the Murragh.

Wicklow is situated on a piece of elevated rugged ground backed by hills of considerable height, over the point at which the river Vartrey, or Leitrim, after flowing through the narrow creek already noticed discharges itself into St. George’s Channel; this river is crossed by a bridge of eight arches.  The houses are irregularly built and of very inferior appearance: the streets are narrow and neither paved nor lighted, but there is an ample supply of water from springs: the town is a place of resort for sea-bathing during the summer months, and would be much more frequented for this purpose were suitable accommodations provided for visiters [sic.].  Races occasionally take place on the Murragh, a portion of which is kept as a race-course, on which a small stand has been erected”. 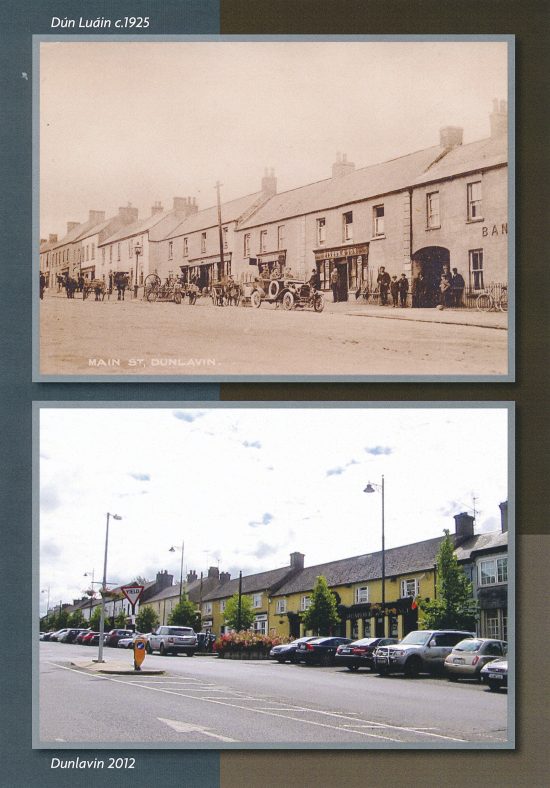 “DUNLAVAN, a market and post-town, and a parish partly in the barony of UPPERCROSS, county of DUBLIN, but chiefly in the lower half-barony of TALBOTSTOWN, county of WICKLOW, and province of LEINSTER, 7 1/2 miles (N.) from Baltinglass, and 21 (S.W.) from Dublin, on the old road from Blessington to Timolin; containing 2528 inhabitants, of which number, 1068 are in the town.  This place is situated on the confines of the counties of Wicklow, Dublin, and Kildare.  The town, which is the property of the Tynte family, is built on an eminence surrounded by higher grounds, and consists of two streets, one of which branches off at right angles from the centre of the other.

It contains about 180 houses, of which several are well built, is amply supplied with water from springs, and is considered a healthy place of residence … The market-house, in the centre of the principal street, and said to have been erected at an expense of £1200, by the Rt. Hon. R. Tynte, was, in 1835, thoroughly repaired, and one end of it fitted up as a court-house, by Lady Tynte; it is a handsome building of hewn stone, with four projecting porticoes, and crowned int he centre by a dome.  During the disturbances of 1798, it was fortified and garrisoned for the protection of many families that fled to this town from the insurgents, who were in the neighbourhood”. 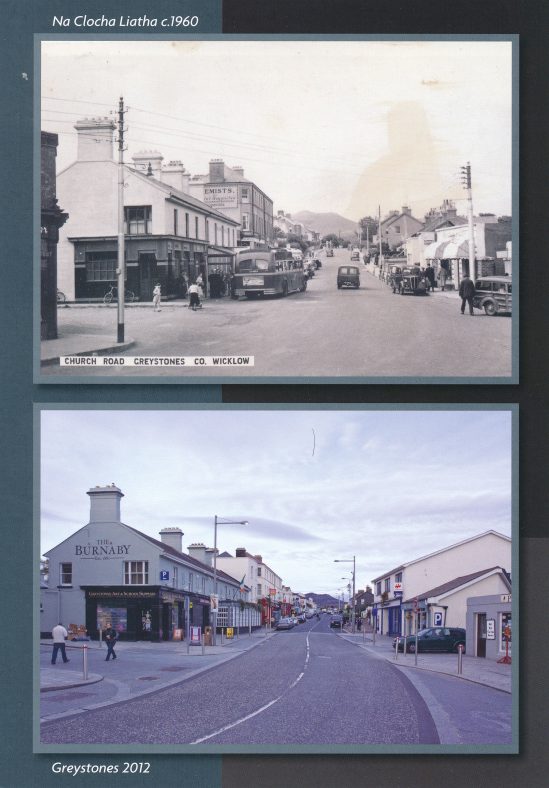 “…about three miles to the south of Bray Head, on a low rocky point, is the small fishing hamlet called the Greystones, where is a coast-guard station, which is one of those that form the district of Kingstown.  This point, which is a headland of slate projecting into deep water, has been considered by Mr Nimmo to afford a suitable site for the construction of a harbour, and his estimate for erecting a serviceable pier is £4000.  This would enclose an area of two acres for an outer harbour, with a depth of ten feet at low water.

The scenery is richly diversified, and the neighbourhood is embellished with numerous seats, of which Bellview is the chief.  It is situated in the Glen of the Downs, which is a deep ravine formed by a disruption of the mountain, apparently by some convulsion of nature, with precipitous sides, richly clothed in wood.  Near its northern entrance stands Mrs. peter La Touche’s rustic cottage, on the margin of a fine lawn.  The eastern part of the glen is included in the beautiful demesne of Bellview, the seat of Mrs Peter La Touche”.