The earliest written reference to Mullinacuff is in 1401 when it was known as ‘Mulynncufid’ (www.logainm.ie). The townland name preserves the fact that there may have been a mill on site ‘muileann’ which translates as mill in Irish. There is a record of a mill in close proximity to the church site in the adjacent townland of Knockatomcoyle which is no longer extant (Corlett & Weaver, 2002, p. 191). The archaeological evidence indicates that this site has much earlier origins dating back to at least to the introduction of Christianity and at least the 8th century. 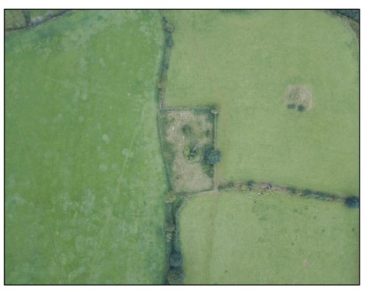 The founding of Mullinacuff church dates to an era of massive social change following the arrival of Christianity – the new and soon to be the dominant religion. This occurred in tandem with the development of new political dynasties. At the Iron Age/ early medieval transition, Ireland was made up of up to 150 tuatha or tribal units ruled over by a chieftain. These tribal units formed part of larger territorial units ruled over by Kings. In the sixth/seventh century Wicklow was ruled by the Dál Messin Corb – an important Leinster dynasty that included St Kevin of Glendalough (Ibid., p. 11-12).

Mullinacuff Church is typical of an early medieval parish church which were single cell,
small, rectangular in plan and with a single doorway in the west wall (Noonan, 2015, Downey & O Sullivan, 2017, p. 18). These churches were built on an east-west orientation with the altar to the east and were surrounded by a cemetery and situated within an enclosure. These plain rectangular mortared stone churches remained in style until the early 12th century when the Hiberno-Romanesque style developed. There are approximately 140 early medieval mortared churches recorded in Ireland which were primarily built between the 10th and mid-12th centuries (Ibid). It has also been observed that until the 11th century most of these mortared stone churches had antae- square sectioned projections of the side walls beyond the end walls (Ibid., p. 18). It would appear that Mullinacuff dates to circa 12th century.

The ruin of the church comprises three partial walls, with vegetation attached to the external walls faces. The east gable which is the best preserved survives to a height of 5m and a single round arched splayed window embrasure would have illuminated the altar. Vegetation and shrubs are located in the central area of what was the church, including an Irish Yew tree. Other shrubs and a lone pine tree are located within the graveyard grounds, as well as a mixture of various overgrown grasses covering much of the headstones and unmarked graves. 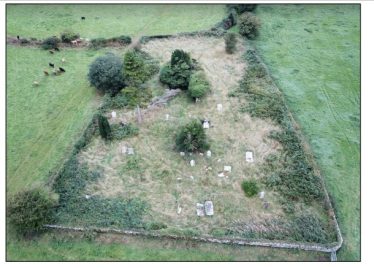 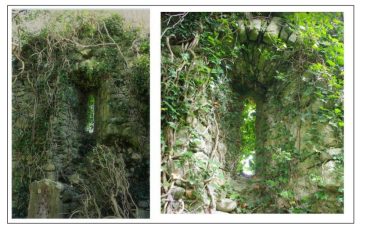 Despite the general belief that St Patrick ‘brought Christianity to Ireland’ in 432 AD, there were already Christians in this part of Ireland before his arrival as a result of  contact between Ireland and Romanised Britain formed as a result of trading and raiding. New settlers brought new customs with them to Ireland: they brought a new religion that included a new form of burial practice – supine, extended inhumation together with the establishment and construction of churches. The early Christian monastic system adopted the native Irish settlement style by enclosing their early monasteries with earthen banks (Noonan, 2015, p. 4).

In addition to internationally famous monastic sites such as Glendalough and Clonmacnoise, there were smaller Christian communities throughout the Irish countryside similar to Mullinacuff. These communities mostly consisted of lay people and were concerned mainly with ministering to the spiritual needs of the people in their area (O Sullivan & Downey, 2020, p. 43). The majority of early ecclesiastical sites appear to have originated with a founding saint who lived in the sixth century (Ibid., p. 44). These settlements along with containing churches and cemeteries, were also centres of craft working and the occupants engaged in farming (Ibid., p. 18).

During the gradual conversion from paganism to Christianity, the laity would have still buried their dead in familial cemeteries that would have supported a local, secular community.
This practice was tolerated by the church up to the eighth century. Prior to this, burial in monastic centres like Mullinacuff would have been reserved for high-ranking members of society; typically bishops, abbots, clerics and patrons. However, from the eighth century onwards, the Church began to legislate regarding acceptable burial practices and the ‘Collectio Canonum Hibernensis’(‘Collection of Irish Canons’) urged the faithful to abandon burial among their ancestors in favour of burial in church cemeteries (O’Brien 2011, p.58). This is where early medieval church sites such as Mullinacuff came into use. These sites range from the better-known monastic complexes like Glendalough and Clonmacnoise, to small and almost forgotten places in secluded fields like Mullinacuff.

The earliest churches were small timber structures. They were founded in the period 500–800 AD and were built primarily of timber frames with post-and-wattle walls and clay (O’ Sullivan & Downey, 2017, p.18). Only twenty timber churches have been identified to date. Mortared stone churches may have replaced an earlier wooden church in many instances. There are approximately 140 churches in the country which were built between the tenth and mid-twelfth centuries (Ibid). These early church sites were defined by one or more curvilinear enclosing elements which could comprise ditches, banks, stone walls and palisades. Recent research suggests that there are approximately six thousand ecclesiastical sites in Ireland which is on average, one for every ten townlands (O Sullivan & Downey, 2020, p. 44). 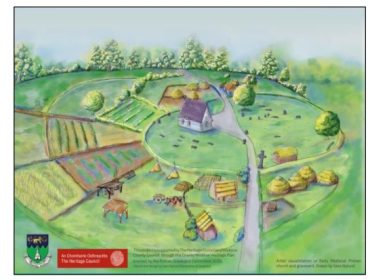 Artists visualisation of early medieval church site at Preban, Co. Wicklow which would have been similar to Mullinacuff (drawn by Sara Nylund).

Many small early medieval church sites contained a church and cemetery on the eastern side with domestic and craft areas in the western part of the enclosure (Ibid.). The innermost core was called a vallum in which the church and graveyard were located and this was considered scared (Noonan, 2015, p. 5). Carved stone crosses often mark the boundary of this sacred area defining it from the outer enclosed areas where craft, domestic, agriculture, cereal processing and iron working were carried out (ibid, (O Sullivan & Downey, 2020, p. 46). Some people also lived in and around the monastic sites, either as monks living within the enclosure or workers on the monastic estate living in the area outside the enclosure. A range of features are associated with these sites comprising the church and graveyard, dwellings, various ovens / kilns, wells and mills as well as field systems, although some of these would have been located outside the ecclesiastical enclosure.

The three main farm animals on early church sites were cattle, sheep/goats and pigs. Barley was the dominant cereal, followed by oats and occasionally wheat and rye. Mills were often erected near the church sites, with corn-drying kilns typically within the outer precincts. Liam Price, a noted antiquarian who visited the site in 1933 noted that there was a ruin of an old mill at Mullinacuff in Knockatomcoyle ‘just across the stream from the Moat field in Stranakelly. There is the foundation of a square building visible’ (Corlett & Weaver, 2002, p. 191).

Church reforms in the twelfth century and the arrival of the Anglo-Normans saw the building of larger churches in the Gothic style, which were internally divided into different sacred spaces like those of today.

A mound is visible in the field to the north of the church and a geophysical survey in 2022 revealed exciting results. It would appear that this ‘mound’ represents an Anglo-Norman Motte and Bailey and its location was probably chosen given there was already an early medieval church on the site. After the Anglo-Norman invasion in 1169, the new settlers began the construction of castles to extend their control, the majority of which were built of earth and timber. These were favoured materials because of the speed with which castles could be erected and they may also have customized pre-existing earthwork.

Early castles were of two principal types: mottes and ringworks. The motte and bailey consisted of a flat-topped, steep-sided, earthen mound supporting a wooden
tower, with an associated courtyard or bailey, which is often raised and enclosed by a bank and fosse. The motte and bailey castles were constructed by piling up layers of earth and stone. They were quick to build using local materials and did not need skilled labour. The motte would have had steep sides making it easy to defend in times of attack. The bailey which would have been a bustling settlement would have been possibly surrounded by a wooden palisade, and a ditch (called a fosse). 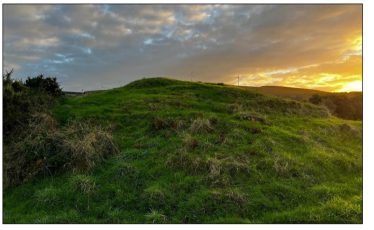 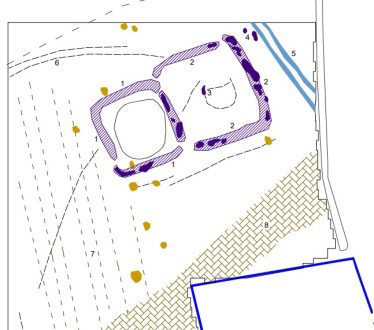 We know that in the 15th century the rectory at Mullinacuff was of considerable value and was ‘of the patronage of laymen’ (Price, 1967, p. 508).

The Dissolution of the Monasteries between 1536 AD and 1541 AD by Henry VIII ordered the closure of Catholic monasteries, priories, convents and friaries and transferred their lands to those loyal to the king. This policy of dissolution was intended to increase the crown’s income and to fund military campaigns. When Elizabeth I succeeded to the throne in 1558 AD, she continued the policy of a re-conquest of Ireland that would eventually result in the completion of the Dissolution in Ireland and introduced the Act of Uniformity of 1560, which made all church worship formally Protestant and all churches and lands were now part of the Anglican Church (Noonan, 2015, p.26).

Church sites such as at Mullinacuff were either refurbished or else left in ruins and a new
Protestant church built in its place elsewhere or within the grounds of the churchyard. However both Catholics and Protestants continued to bury their dead within the old parish church grounds, as is the case at Mullinacuff which is a mixed graveyard. Burials continued in this graveyard up until 1947 and it is now a closed burial ground.

The medieval church ruins are in immediate danger of collapse and Wicklow County Council successfully applied for CMF funding in 2021 to complete a conservation Management Plan for the church and graveyard. This Conservation Management Plan has enhanced the understanding of this early medieval church site and has outlined steps to conserve the church. The plan will project a clear path forward to protect this highly significant site; it is only one of a few surviving church sites in this area of Wicklow. There are just 140 such sites nationwide and their preservation is crucial for future generations. These reports will be updated to this website and will be shared on social media.

Wicklow County Council successfully applied for funding for the compilation of a Conservation Management Plan for Mullinacuff Church and graveyard in Stranakelly, Tinahely, County Wicklow. Funding for the plan was granted under Stream 2 of the Community Monuments Fund 2021 which was administered by the Department of Housing, Local Government & Heritage through the National Monuments Service (Ref: CMF21-2-WI003).