zoom
An image from the Society’s July 2021 Drone Overflight.

Castlekevin, now visible only as a grassy mound, was the epicentre of a ferocious struggle between Gaelic Irish and Norman Colonists in the Wicklow Mountains. Although the history of Castlekevin has been documented by several historians over the years, there has however, until now, never been an archaeological assessment of the site.

Located 1.3km southeast of Annamoe village, 6km north-east of Glendalough in a rural setting on a ridge overlooking the marshy floor of a stream valley to the north, the overgrown remains of its Motte and Bailey castle are today barely discernible and the casual passer-by is unlikely to comprehend Castlekevin’s once great political and military significance. 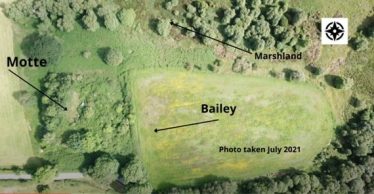 An image from the Society’s July 2021 Drone Overflight.

For Heritage Week 2021 the committee of the Roundwood and District Historical Society made a drone overflight video of Castlekevin which highlighted the alarming extent of the site’s deterioration.

Anxious that such an important archaeological site be preserved, the committee approached Deirdre Burns, Heritage Officer for Wicklow County Council, for advice. A successful application was then made for a grant under the Community Monuments Fund in 2022 to allow the preparation of a conservation plan for this monument. This fund, administered by the Department of Housing, Local Government and Heritage, invests in archaeological heritage and helps owners and custodians of archaeological monuments to safeguard them into the future for the benefit of communities and the public. (“gov.ie – Circular CMF2022 – Community Monuments Fund 2022”)

With the generous permission of the landowners on whose property Castlekevin stands, the support of the Community Monuments Fund 2022, and the encouragement of the Heritage Office of Wicklow County Council, the way was now clear for the Society to develop with its Castlekevin Project.

Although the history of Castlekevin has been well documented over the years there has never been a scientific or archaeological survey of the site completed. The funding obtained has allowed the Society to use professional archaeologists to scrutinise the area with non-invasive LiDAR, geophysical and ecological surveys. The objectives of the project are to understand as much as possible about the site and its wider environs, and to prepare a conservation plan for Castlekevin in order to ensure that its importance is understood and highlighted for future generations.

The multi-disciplinary team involved in the project includes:

Given the heavy vegetation covering Castlekevin an aerial LiDAR survey of the area was undertaken in order to obtain a 3d image of the Motte and Bailey and the surrounding area. A geophysical survey of the Bailey to the East of the overgrown Motte was undertaken at the same time.

Whilst the results of these surveys are still being processed and interpreted, we have already obtained sufficient information to enhance our understanding of  Castlekevin and  guide our approach to the future conservation of the site.

Amongst the exciting results to date are the possible discovery of possible medieval linear boundaries identified by the LiDAR survey. This suggests that there may have been a further settlement to the west of the Motte. Further geophysical survey of this western area is warranted in order to enhance our understanding of Castlekevin’s past.

A second aerial LiDAR survey will be undertaken when vegetation on the site has died back. The completion of a baseline ecological survey will set the context of the site and inform of any ecological sensitivities which should be considered in future conservation works.

The team feel it important that the progress and outputs of this project are communicated to as wide an audience as possible so that the great role that Castlekevin played in the political, military and religious upheaval of medieval Ireland is highlighted for future generations. To this end, all steps of the project have been followed and documented by The Irish History Podcast, please see link below.

The podcast series, directed by Fin Dwyer, will had the support of a multi-disciplinary team including film and archaeological professionals. The series incorporated both narrative elements and interviews with stakeholders and the local community on location. This collaboration with the Irish History Podcast will see the release of the series to an established audience in excess of 25,000 listeners per episode.

In order to keep the community abreast of the project’s progress, the Society organized a Heritage Week event on Tuesday 16th August in Roundwood Parish Hall. The preliminary archaeological survey results from Castlekevin were presented. Fin Dwyer of The Irish History Podcast showcased the team of specialists including Yvonne Whitty, archaeologist, Faith Wilson, ecologist and Dr. Paul Naessens who completed the LiDAR survey. This led to a lively discussion both between the experts and responses from the floor of the meeting. Many from the immediate neighbourhood were able to add pertinent information about Castlekevin’s recent past.

A lot has been done since the inception of the project and the team are excited by the information and insights obtained in this first phase, which will be completed by mid November. It is clear however that we have so far just scratched the surface. All results of the surveys and historical research are currently being collated in order to prepare a conservation plan for the site and an application will be made to the Community Monuments Fund in 2023 for support to further progress of the Castlekevin project.

The project has brought together members of the community and heritage experts to ensure best practice in the conservation and interpretation of an important historical monument. It is hoped it will inspire other groups to explore their hidden heritage.

Successful continuation and completion of the Castlekevin project promises significant benefit to the wider community. For the community there will be increased protection of the site through increased awareness and a high standard of interpretation of the monument. This has also the potential to boost local heritage tourism, defined as the practice of visiting places which authentically represent the stories of people and the past. Heritage tourism sites include cultural, historical, and natural resources. Castlekevin, one of only four Anglo Norman masonry castles listed in Wicklow, is an excellent example of a cultural, built, and natural heritage asset.

Click on the link below to hear the Podcast on Castlekevin.