Whitefield church and graveyard dates to the Penal Era and remained covered by vegetation for many years and invisible until a local community became involved in its restoration. CMF funding has enabled us gain an understanding of this site and protect it for future generations. Below is a summary of the historical background of the site.

The church and graveyard date to the era of the Penal Laws which were an attempt to force Irish Catholics and Protestant dissenters to accept the new Anglican Church. These laws were added to and became particularly stringent in the reigns of William and Mary (1688–1694), William III (1688-1702) and Anne (1702-1707). The reasoning behind these apartheid measures was the belief that Catholics owed allegiance to the pope rather than to the head of monarch and were not to be trusted in the event of Catholic France or Spain declaring war on England.

Catholics were not allowed to practice their religion and so this led to Catholic worship taking place in penal churches at Whitefield or ‘Old Killavaney’ as it was then known. Priests said at mass rocks, private houses or Mass Houses. In Wicklow in in 1731 the following mass houses are recorded;  one each at Bray, Castlemacadam, Glendalough, Newcastle, Threemilewater, and two are recorded at Arklow, Delgany, Rathdrum and Wicklow (Corlett & Hicks, 2018, 41).

Although there is no upstanding trace of the church, once the vegetation was cleared by FAS and local volunteers, it was possible to identify the footprint of a ‘T-shaped’ church. The T-shaped church is aligned east-west , 26m in length and with a north and south transept extending off the chancel for a distance of 37m. The width of the nave and transepts are 5.50m. As is the case at Kilmurray the chancel projected slightly to accommodate the altar. The chancel was located in the western part of the building.

Churches in the penal era were generally thatched as is recorded at Annacurra which was built by Father Brennan and burned during the 1798 Rebellion. These thatched chapels were vernacular in style and used locally available materials including stone and mud and comprised a random rubble stone construction. Towards the end of the 18th century when the Penal Laws relaxed the churches were built in two main styles; ‘Barn Church’ and ‘T-Shaped’ churches (Noonan, 2015, 108).

By the mid-eighteenth century the ‘T-shaped’ chapel became the preferred design. This style of design originated in Scotland and spread to Ulster where it was popular with Catholic and Presbyterian congregations and quickly spread throughout Ireland (Corlett & Hicks, 2018, 45). One of the oldest examples of a surviving T-shaped Irish Catholic chapel is at Kilmurry, County Wicklow. This chapel has been wonderfully documented in recent years (Corlett & Hicks, 2018). The footprint of both Whitefield and Kilmurray as depicted on historic mapping is almost identical. Kilmurray appears to have been constructed in the 1780s or 1790s.

The north and south transept were built to accommodate larger congregations and to provide a better view of the altar (Noonan, 2015, 38).

Graveyards often developed beside these churches, as is the case at Whitefield, however the Catholic community continued to use the graveyard associated with the medieval parish church, in this case Kilcommon just outside the village of Tinahely which is an early medieval church site. A large boundary surrounds Whitefield, however only 44 headstones were inscribed, the earliest dating to 1802. There are however as many more grave markers and it is interesting to note that there is a concentration of grave markers at the northern corner of the site. This suggests that the graveyard may have developed some years after the chapel itself was constructed given the date of the inscribed headstones which for the most part date to the mid-19th and 20th century and are a mixture of ‘table’ tombs, ledgers and upright headstones.

Although burnt down in 1798, the chapel was rebuilt and in use until the 1840s, when Father Thomas Hore was appointed parish priest in 1841, in succession to Father Charles O Brien. Father Hore set about building the present St. Kevin’s church, 0.9km north-east of Whitefield graveyard. On 20 April, 1844, St. Kevin’s was consecrated by Bishop Keating and the old chapel was abandoned (Grattan-Flood, 63). Fr. Thomas Hore, gave an impassioned speech in Whitefield in 1850 in a successful effort to entice hundreds of his parishioners to emigrate to America with him (Rees, 1994).

The works competed as part of CMF 2022 funding at Whitefield Graveyard, Tinahely, Co. Wicklow comprised a geophysical survey, repair of entrance gate, topographical plan of the gravestones and tree surgery. 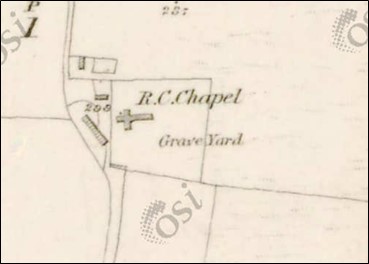 The location of the existing headstones was recorded by GPS, they were transcribed and a photographic record undertaken. The restoration of historic graveyards and the transcription of information from the gravestones provide advantages over written church records, firstly, they go back much further in time and in most instances, provide links between the generations in any given family. 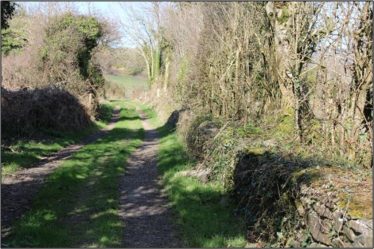 Wall prior to rebuilding. 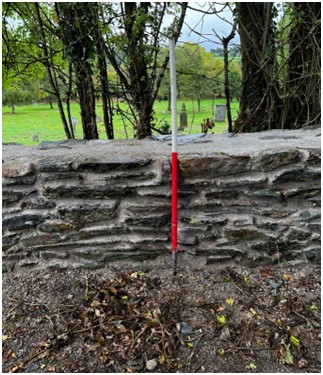 Wall after repointing with lime mortar.

The boundary wall and iron gate have been repaired and this has improved access to the site. It can now used as a pocket park where people come to sit in a peaceful tranquil setting. The graveyard has rich biodiversity and is carpeted in a sea of bluebells in spring, the cutting regime based on ecological guidelines has enhanced this aspect of the site. 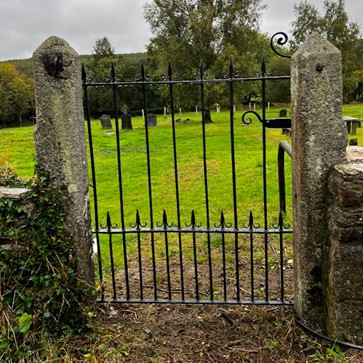 It is expected that a final phase of works identified in the conservation plan will be carried out in 2023 subject to CMF funding and approval.