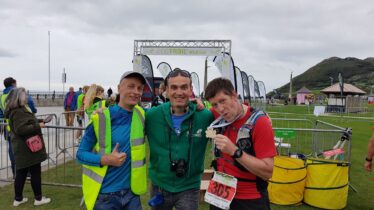 Well it’s not every day that I sign up for an 18k trail run but somehow I managed to do it today. Only I won’t be running I’ll be walking, but apparently I have to walk quite fast and raise a sweat. Given the trail run is up and down a few mountains I don’t think that will be a problem. September, here I come.

So how did that happen? Well I was interviewing the enthusiastic Fred Verdier of Wicklow Tourism. Last year Wicklow held its first ECOtrail, part of a wider international movement, and such was the success that it is on again this year with more than 200 people already signed up for the most difficult race.

One of the fastest growing sports in Europe

The ECOtrail is all about the trail, the views, the journey. It is a not a speed race although of course some will be speedier than others but it is way of travelling over beautiful scenery in the company of like minded people. It began in Paris as a way to connect cities with the outdoors and nature and a route was planned that took in green belts across the city. It is now one of the fastest growing sports in Europe and has taken off in France, Spain, Italy and the UK. It is also taking root in Asia and North America.

Last year was the first time it was hosted in Ireland and Fred was praying for good weather.
“I had arranged for two cameramen with drones and I really needed the weather to be good.”It certainly was and the resulting video is awe inspiring. The video is also very emotional – a combination of the beautiful scenery, haunting music and just the views of the runners dotted like tiny ants of a landscape that would be hard to be beaten for its beauty and variety. After all, Wicklow has beaches, mountains, lakes, waterfalls, and vegetation of every hue and colour: a perfect artist’s palette.

“Trail running is very simple – if you think about it our ancestors were doing just that running away from the English,” laughs Fred.

The ECOtrail is not for the faint hearted with the shortest run covering 18k – up and down a few mountains – and the longest being 80k for endurance or extreme runners. But again Fred makes the point it is not like road running. “With road running people are constantly looking at their watch to monitor their time. Whereas with trail running it’s all about finishing and yes people can walk it too although they tend to walk a bit faster than you might on a country stroll.

“You do need a level of fitness to complete the race, even the shortest one. However, last year we had someone in their late 70s, so it is possible.

“Trail running is also much easier than road running which is hard on the joints. On a trail you are constantly looking where you are putting your feet but it’s soft and people tend not to get injuries as a result.”

Right now Fred is confident that by September the country will be opened up again. Trail running also allows for social distancing although he needs to figure out the start and finish, but it’s outdoors and up mountains so it will be very safe. He will limit the actual number competing to approximately 1500 and will work closely with the event organisers to ensure all health and safety procedures are in place.