You are here: HomenextTopicsnextWICKLOW'S WAR OF INDEPENDENCE | The Historians' ProjectnextASHFORD | Sheila ClarkenextA Sense of Duty: The Somervilles of Clermont House by Sheila Clarke

A Sense of Duty: The Somervilles of Clermont House by Sheila Clarke 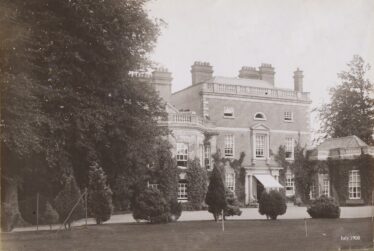 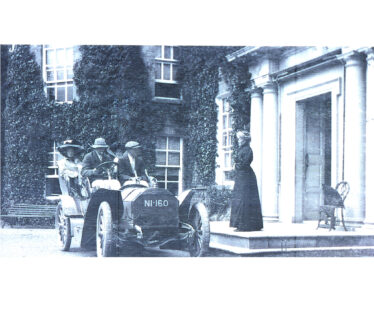 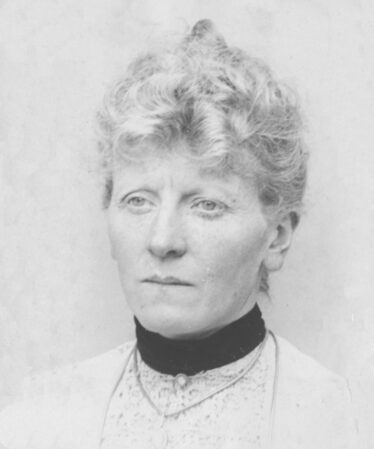 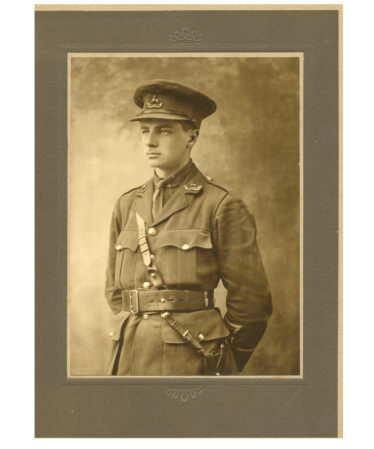 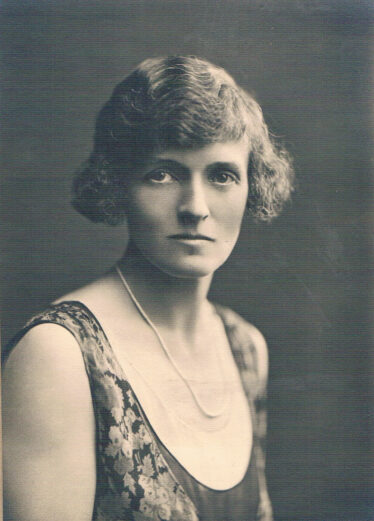 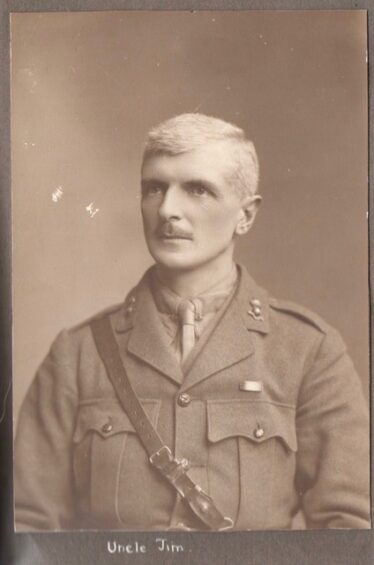 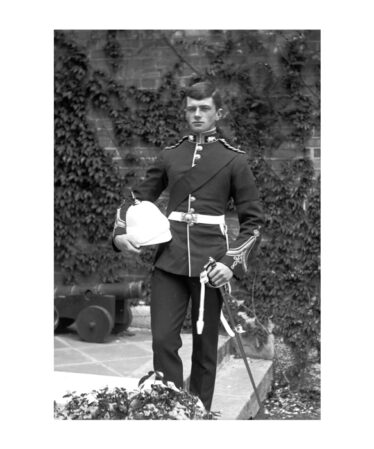 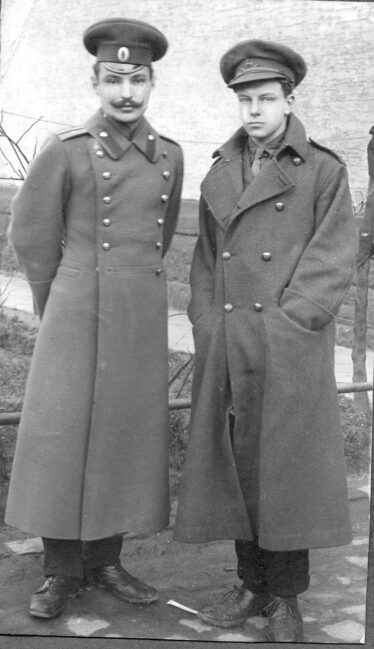 (This article is based on interviews and images kindly provided by Mr. Bill Somerville, the son of Regi Somerville of Clermont).

The armistice had been signed on 11th November 1918.   A new year had begun and at Rathnew, County Wicklow, Margaret Somerville was anxiously awaiting the return home of her four soldier-sons.  They would be among the many thousands of ex-soldiers making their way home from Europe, sometimes after an endured wait for a seat on the homeward bound ship. She was also concerned about the deadly Spanish flu which was raging at that time throughout the continent.   However, she had good reason to be grateful, knowing that almost every other family in Rathnew had suffered great losses.

The War of Independence was in full swing and the local republican volunteers were kept busy maintaining their national plan of civil disobedience and disruption.   When the Somerville family car along with its chauffeur was hijacked by the local brigade, Mrs. Somerville was livid with anger.  The  Somervilles’ chauffer was Isaac Langrel, he had been the coachman at Clermont before the purchase of the family car.  He and his wife Margaret’s two sons, Isaac and Harry, had served on the front and they too were making their way home.  Isaac was for a time reported as ‘missing in action’ until he had been discovered in a POW camp in 1915.

After the car was returned the next day, Mrs. Somerville instructed her chauffer to round up the local volunteers and to bring them immediately to Clermont, she wanted to speak to them.  That Langrel had succeeded in getting the Volunteers to appear before Mrs Somerville was remarkable in itself.   Perhaps it was curiosity or even excitement on their part in agreeing to the summons to Clermont, because Mrs Somerville was known to be quite a formidable woman.

On arrival, the men were lined up in the drawing room at Clermont. In a stern voice, Mrs Somerville said to them:

I am English, the Union flag flies on the roof of this house and I have four sons who have been at the front and are trying to make their way home.

The local volunteers were keenly aware many men and women from Rathnew village were employed both inside and outside of Clermont.  Her forceful personality was such that she was able to secure an undertaking from them that her four sons would not be targeted on arrival home, simply because they were officers in the Army. She recalled that her youngest son, Regi, had been ambushed whilst driving his motor bike at the top of Ballinabarney Hill (Rathnew) in 1915  –  before he had left for training camp in England –  in the mistaken belief that he was Pat, his older officer brother.

At the start of the war Margaret Somerville provided help in one form or another to a very depressed Rathnew village.  It is said that she paid the wages of every man from Rathnew village who had recently enlisted in the army until such time as their first payment came through from the War Office.  When the war ended, she and her youngest daughter, Edeline, together with Aileen Crofton who then lived at her family home in Marlton House, Wicklow town, assisted with the written applications to the War Office for the pensions of the returned local ex- soldiers in 1919.

Margaret Somerville’s husband, Bellingham Arthur, died at home in Clermont in 1916 and during that time three of her four sons were fighting in Europe and in the Middle East. Bellingham Arthur Somerville had been an RIC District Inspector, serving in Armagh, Down and Cork.  After transferring to Wicklow Town he served there for three years prior to his early retirement for health reasons in 1891. A keen amateur photographer he began the first of a rare collection of photographs taken at Clermont during the building renovations in 1894.  The negatives were printed onto glass plate in the darkroom situated in a wing of the house, a hobby which his children continued.

Margaret Hall Clinch Somerville was born in Oxfordshire, the daughter of a Witney brewery and banking family.  It was her wealth which enabled the purchase in 1893 of the dilapidated Clermont House situated on 70 acres for £1800 and the funding of the renovations and extension.  Prior to Clermont the family rented houses at Seaview and Friars Hill in Wicklow Town and lastly, Ballyhenry House, Ashford. They had seven surviving children.

William, (otherwise known as Bunt), James (Jim) and Gualter (otherwise known as Pat), the three older sons, had in the earlier part of the century decided to make a career for themselves in the Army, following a tradition in many landed or Church of Ireland families.  Notwithstanding the fact that Pat had been captured on the retreat from Mons and held in a prison camp from 1914 to 1917, their younger brother, Reginald, (Regi) decided to join up in 1915.

William, Lt. Col, was in the Kings Own Royal Lancaster Regiment, served in France. In 1919 he commanded the 8th Battalion Machine Gun Corps, as part of the international force designed to protect Allied interests in Northern Russia during the Bolshevik revolution.  He was awarded the Distinguished Service Order and Bar.

James, Lt. Col, was in the Royal Artillery, serving in Mesopotania (modern day Iraq) Egypt and Palestine. He was awarded the Distinguished Service Order.

Pat, (Captain) was born in Ballyhenry House Ashford in 1894, where the family resided whilst Clermont was being restored.  He served in the Royal Warwickshire Regiment with the British Expeditionary Force and was captured following the Battle of Mons, at Zonnebeke, near Ypres, in  October 1914. Pat made numerous attempts to escape from his  POW camp in Crefeld, situated North West of Dusseldorf, Germany.  He succeeded in his final attempt in 1917 when he safely crossed into Holland having walked over 100 miles for three days and nights and having forded a number of rivers, arriving safely at the War Office in London. For his exploits he was awarded the Military Cross.

Regi was born in Clermont in 1897, three years after the family had taken up residence.  The children were taught at home by tutors and governesses and their social activities consisted of games of hockey and tennis with children of other families in the area such as the  Croftons, the Tighes and the Truells.

In 1916 when Regi was 18 years of age he followed his brothers into the army feeling, he said, a sense of duty.   He joined the Royal Warwickshire Regiment in serving in France and Belguim at Vimy Ridge and Passchendaele and finally with the Machine Gun Corps in Italy. 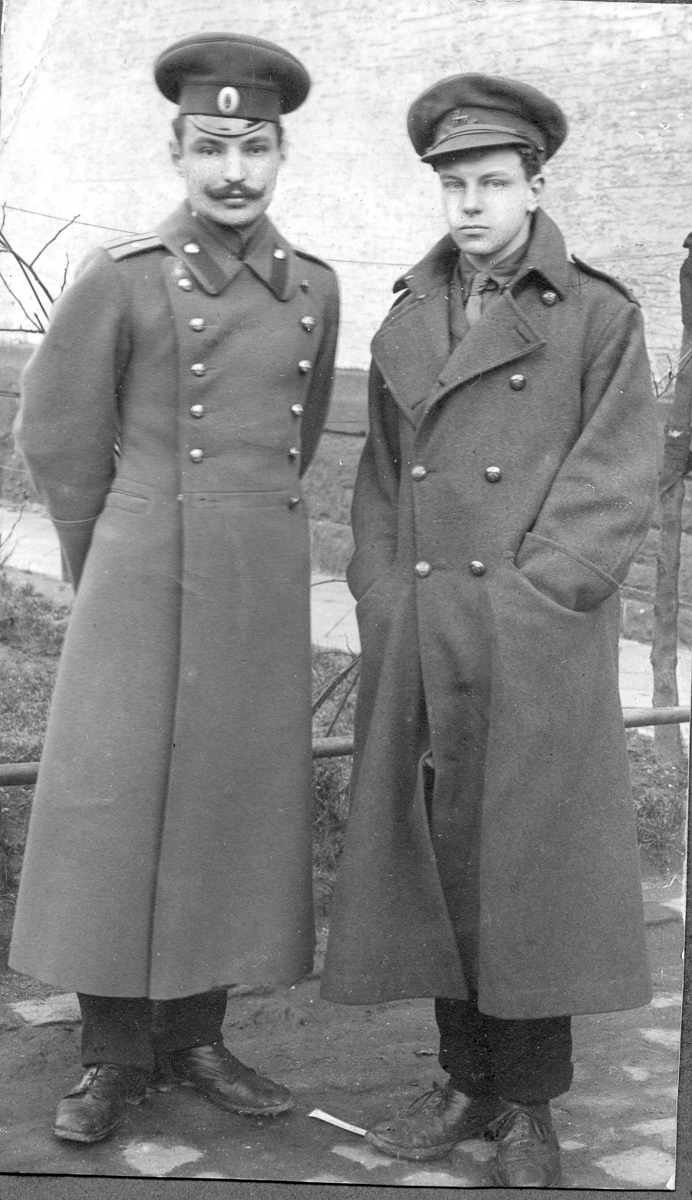 Pat Somerville, pictured on the right, managed to smuggle his camera in his breeches on the long journey to Crefeld POW camp.  (Pat with a Russian officer. Photo: By kind permission of Mr. Bill Somerville).

Pat Somerville served in the Royal Warwickshire Regiment which was part of the British Expeditionary Force.  The following is an extract taken from his debriefing report to the War Office in London following his successful escape from Strohen POW camp in 1917 for which he was awarded the Military Cross: