You are here: HomenextTopicsnextWICKLOW'S WAR OF INDEPENDENCE | The Historians' ProjectnextASHFORD | Sheila ClarkenextAshford Locals Recall the Unwelcome Visits of the Notorious "Black and Tans" by Sheila Clarke 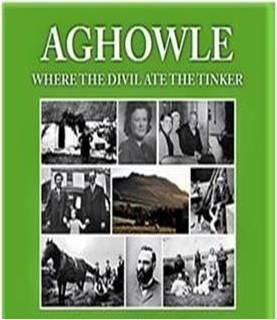 Molly Connolly and Bride Farrell, Aghowle, were teenagers at the time when Carrick Mac Reilly (Carrick Mountain) was a handy place to socialise on Sundays, however, it was also where some local Volunteers target-practised during the week days and so the girls would collect the spent cartridges as souvenirs.

Patsy Connolly, Aghowle, recounted a visit by the Tans to his parents’ farm house when he was about 14 years old. The uniformed men called demanding bread and milk from his mother. Reluctantly, she gave the requested provisions and before leaving they took a good look around the house, farmyard and turf shed. Word quickly spread that the Tans were in the neighbourhood.

Peg O’Brien,  Aghowle, was then a young girl of about 7 years of age and she  lived a mile away from the Connolly farmhouse, minding her younger siblings at the time.  Advised to run and to hide quickly she took the children to the field and hid them and herself under the haystack, not venturing out until almost dark.  When her parents returned they told her it was a bad place to hide as the ‘Tans ‘usually set fire to haystacks when they could.

Jer Farrell, Aghowle, whose farm was across the fields from Carrick Mountain would, under cover of darkness, quietly bring bread and milk to the volunteers hiding out among the rocks.

George Lawless, Ballinahinch, served in WW1 and had returned home by 1919.  Not surprisingly, his house was searched by the ‘Tans for the purpose of confiscating weapons which might otherwise fall into the Volunteers hands.  During their search the Tans found his war issue pistol which he had strapped beneath the kitchen table.  George was fortunate that he was not arrested and jailed for possession of the pistol, most likely because he was an ex-soldier and this was his army issue weapon.

Andy Kavanagh Senior recounted in the Ashford Historical Journal,  1992,  that one Saturday night in 1920 the local Volunteer force felled some of the big lime trees which were then growing on the roadside on Tighe’s avenue, at Rossanagh Gardens, blocking the road.   Next morning he witnessed the Tans waiting for the congregation after Mass in the Holy Rosary Church in Ashford.  Immediately, they rounded up many of the young men and brought them down to Tighe’s avenue where they were given crosscut saws and hatchets and ordered to clear the road.

Andy recalled that in the days before road tarring, secondary roads were mainly dirt-tracks and during dry weather the dust rose.  In summer time open-topped busses often travelled from Dublin to Wicklow or Brittas Bay and one day three busses were returning to Dublin in convoy through Ashford village. The Tans had set up a road block at Stephens’ house on the main street where the troops were on their knees, guns cocked. The officer strode out to the centre of the road to stop them but he was forced to retreat quickly as the three buses came flying along at full speed in a cloud of dust, the passengers on their feet, cheering.

One time as an open-topped Crossley Tender was being driven from Ballinalea towards Cronroe, the ten year old Andy was standing on the roadside outside of his home. As the lorry passed him, he stuck out his tongue at the men only to have a gun pointed at him in response.  Understandably, Andy quickly took to his heels.

Mick O’Brien, Aghowle, was one of those young men rounded up by the Tans after Sunday mass.  His worried wife witnessed him being marched off at gunpoint towards Rossanagh whilst she herself had to return home to be with her small children. It was late in the afternoon before Mick returned home safely after all tree branches had been cut up and the road cleared.