You are here: HomenextTopicsnextWICKLOW'S WAR OF INDEPENDENCE | The Historians' ProjectnextBRAY | Henry Cairns | Brian White | James Scannell |nextHazel West of Kilcroney House and the Battle of Pettigo by Brian White 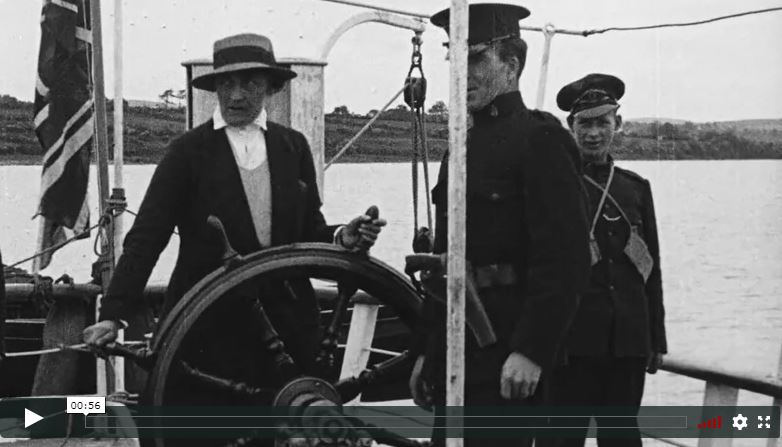 The above is dramatic footage of Mrs. Laverton (Hazel Valerie West), owner and pilot of the steam-yacht The Lady of the Lake (renamed HMS Pandora), which was pressed into service during the rescue operations following the Battle of Pettigo. She was hailed by the newspapers in Britain some days later as the pistol-wearing ‘Ulster Admiral’.

The Battle of Pettigo and Belleek in the summer of 1922 was the largest military engagement between the Irish Republican Army and the British Occupation Forces in Ireland since the Easter Rising of 1916, and one of the last significant actions in the War of Independence.

Hazel Valerie West was born in 1881 to Alfred and Florence West and lived at Kilcroney House, Bray.  The house stands on the junction of the Enniskerry and Wexford Road. Built in 1835, it has been a private residence of the Lloyd, Darcy and West families.  It later became a Country Club with Harry Bradshaw as golf pro, a Nursing Home and the Oak Academy.

While as a nursing home, Dan Breen died there in 1969. Dan was a volunteer in the Irish Republican Army during the Irish War of Independence and the Irish Civil War. He was born in Tipperary in 1894.

In the 1911 Census Hazel Valerie Laverton was living with her father Alfred Edward West. She had married Captain Herbert Curling Laverton on 7th July 1908 in London.