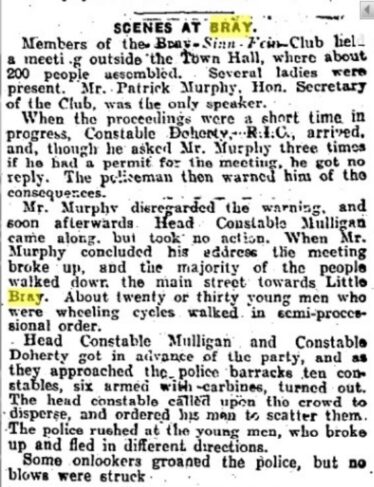 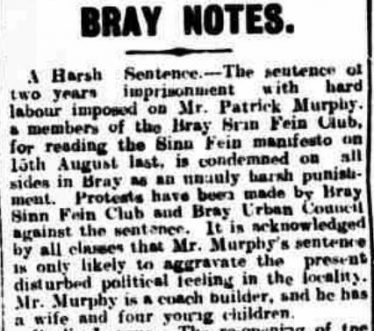 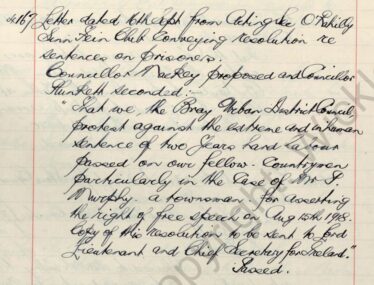 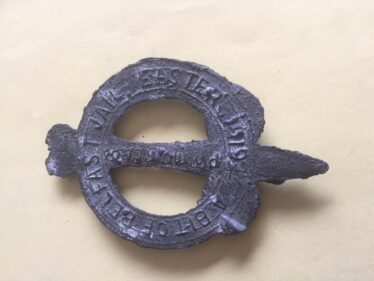 zoom
Broach made by Murphy from gun barrel pipes in Belfast Jail, 1919 c.
Photo: By kind permission of the Murphy family.

Irish volunteer Paddy or Patsy Murphy, was born in Dargan Street, Little Bray.  Chairman of Bray Sinn Féin he came to prominence in 1918 when he was arrested and jailed for reading the Sinn Féin manifesto outside the Bray Town Hall.

Who was Patrick Murphy?

Murphy was one of the first members of the Bray branch of the Gaelic League when first founded in Bray in 1899. He organised the first Feis in Shankill, which was a feature in the district up until 1908, he was involved in the organisation of the Gaelic League in Birr and Waterford and a Sinn Féin Branch in Bray (1908).  Murphy married Mary Byrne (daughter of Thomas & Margaret Byrne, 12 Dargan Street) in 1906.  A founder member (Provincial Secretary) of the Desmond Fitzgerald Sinn Féin Club in Bray in 1917, it later became the O’Rahilly Sinn Féin Club.

He came to prominence on the 15th August 1918 (Lady’s Day) after he read the Sinn Féin Manifesto outside Bray Town Hall in contravention of the Defence of the Realm regulations, he was arrested the following day and brought to Mountjoy jail. He was sentenced to two years hard labour, which he served in Belfast jail.

He was released in 1919, the military authorities prohibiting any celebratory processions or meetings in the main street of Bray or vicinity. A force of about 50 extra police were drafted into the town armed with carbines, a procession formed at Shankill and proceeded without incident to the Sinn Féin club on the upper Dargle Road where speeches were delivered.

On release Murphy went into business at 52 Main Street, Bray, continuing a coach building factory, advertising his availability for work in the Bray Herald.  Murphy was one of four Sinn Féin candidates elected to He won election to Bray Urban District Council in 1920. He had a keen interest in the town and well understood finance matters in council.  Murphy was elected chairman in 1921 after a close contest for the position with Ratepayer councillor, George Byrne. He took the Irish name Padraig Ua Murchadha in office.

Patrick was elected Chairman of the Bray Urban council in February 1921, he took the Irish name Pádraig Ua Murchadha in office. His Dargan Street home was frequently visited by the crown forces, with his garden dug up on one occasion, on another occasion he received a notice holding him responsible for anything that might happen in Bray or district. The councillors were nervous in early 1921 after the disruption at the town hall the previous year.  Some tried to rescind allegiance to Dáil Eireann but the motion did not reach a vote.  The military authorities kept up the pressure on the town hall.  Murphy calmly chaired his meetings, on occasion with the military patrolling around in the offices outside the chamber.

Murphy lost town clerk to Johnny McCaul, was arrested twice and kept most of 1921 in Wicklow Gaol.  The council continued to defy requests from the Local Government Board for its accounts, in which matter the council followed Dáil Eireann’s guidance.

During his time on the council, the name of Aberdeen Square was changed to James Connolly Square. A new housing scheme was completed in Little Bray and named Pearse Square, he suggested this name because he claimed that Pearse had delivered one of his first public addresses in Bray in 1909 on behalf of the Gaelic League.
In April 1922 he was appointed district teacher of Irish to the Coiste Ceanntair, Bray area under the Gaelic League at a salary of £150 per annum. He had the distinction of wearing the Fáinne (a pin identifying fluency in Irish) which he earned at the summer college in Bray in 1920. He was instrumental in having the name of Bray changed to Brí Chualann, which he first proposed in September 1923.
Murphy put forward a design for a new Bray Council Seal, having the crown removed and replaced by a Mermaid from the O’Byrne Clan crest (mermaid holding a mirror and hair brush). This crest was adopted and used up until 1954, when it was modernised but retaining the mermaid to the present day.

From the point of view of republicans, some good work had been initiated in 1922 when a council deputation visited the provisional Dáil.  Requests for big money for council house building were made and positions received.  By July 1923 the council were discussing active proposals.

Murphy was by then being referred to the press as O’Murchadha and he furthered this move to the Irish language in September 1923 by changing the town’s name to Bri Chualainn.  This move was given a luke warm reception in the council but they passed it without going to vote.

The Brí Chualann Urban council election of June 1925 saw his Sinn Féin vote almost completely evaporate, and he departed from council affairs. The following month a vote was carried to change the Town’s name back to Bray, this eventually happened in 1927.
Patrick Murphy alias Pádraig Ua Murchadha died on the 3rd March 1942 at his home in Pearse Square.