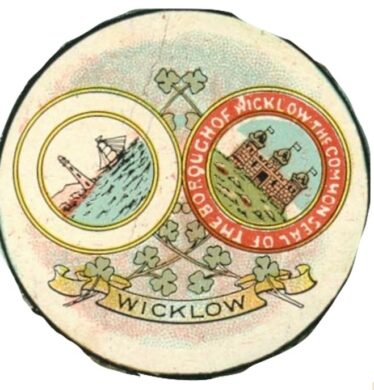 zoom
The dual crest of Wicklow Harbour Commissioners and the Borough of Wicklow both in use in the early 20th century.
Image: John Finlay 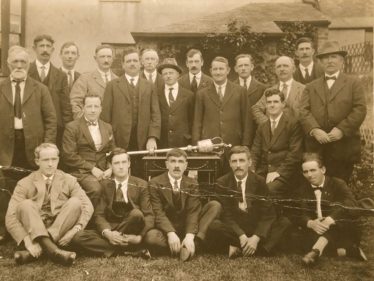 zoom
Wicklow Urban District Council circa 1922 with James Everett seated to the right of the mace and C.M. Byrne in the centre (with the hat) behind the mace.
Image: Courtesy of John Finlay 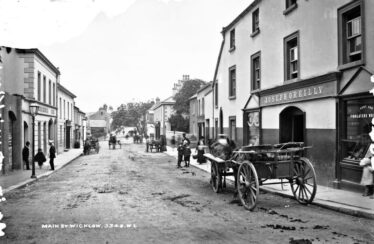 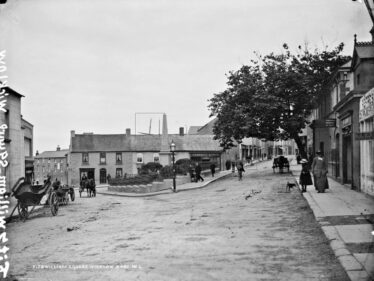 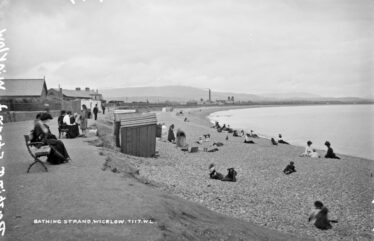 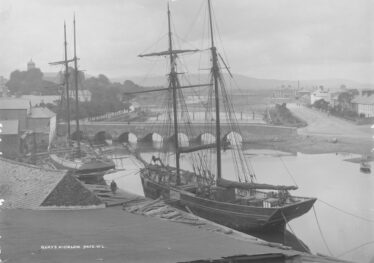 Following the Rising of Easter Week 1916 and the destruction of central Dublin, public opinion had turned against the leaders. Following the surrender of the rebels on Sat. 29th April, all the leaders and numerous other Republicans were arrested and imprisoned awaiting trial/courts-martial. General Maxwell arrived in Ireland on Friday 28th April as “military governor” with “plenary powers” under Martial law. He set about dealing with the leaders of the rebellion under his understanding of Martial law. During the week of 2nd to 9th May, Maxwell was in sole charge of trials and sentences by “field general courts-martial”, in which trials were conducted without defence counsel or jury members and in camera. He had 3,400 people arrested and 183 civilians tried, 90 of whom were sentenced to death. Fourteen were executed, at Kilmainham Gaol, by firing squad, including all seven signatories of the Proclamation, between 3rd and 12th May, 1916. Immediately public opinion changed. Those executed now became martyrs for the cause of Irish freedom and their sacrifice would never be forgotten by the people of Ireland.

At a meeting of Wicklow Urban Council held in the Town Hall, Market Square on August 3rd 1920, a proposal was put forward to re-name the streets of the town. This proposal was considered at a special meeting held on Aug. 7th with James Everett presiding. The Wicklow People in its Wicklow Notes column informed the public of the intention of the Council to alter the street names of the town from their’Anglicised’ version to something more appropriate and suggested that local saints and patriots should not be forgotten. The Wicklow News-Letter reported on the meeting thus: –

The Council took into consideration a proposition made at the monthly meeting to re-name the streets of the town. The new titles have been adopted provisionally and are subject to revision when the question again comes before the Council at their monthly meeting in September. Most of the streets have been re-named after those who fought in the rebellion of 1916. The Council also decided to re-name the town by its old Irish name, Cill Mhanntáin. The streets have been re-named as follows, old names being in parenthesis:

A special meeting of Wicklow Urban Council was held on Sept. 11th to discuss the proposed name changes to the streets of the town and the response of the inhabitants to the proposed alterations. It was reported that some of the residents did not wish the word ’parade’ to be included in the new street name, they much preferred the terms street, hill or row. However the greatest stumbling block was the cost of the cast iron signs with the new street names. Mr. Christopher M. Byrne questioned as to the costs of producing the cast-iron street name-plates as the finances of the Council were limited at this time. The Town Clerk said that if the matter was deferred he would be able to get estimates for the costs of casting the plates. They could then revise the list and recommend a number of street names which could be changed immediately. It was agreed that the names ‘Wentworth’ and ‘Fitzwilliam’ should be removed immediately and that the residents of each street should be approached and the relevant name changed if two thirds were in favour of the change. At the same meeting the ‘Town Crest’ came up for discussion. Some councillors remembered that the old Borough crest was a castle with three towers and they were wondering if they should make more use of the crest of maybe have a new crest designed.

You may be asking if these changes of street names ever took place and are the names of the streets currently in use correct at all?  While in the Market Square, accompanied by a large crowd during a Regatta Historical Walk, a number of years ago, one of those present pointed to the sign which was over the door of the Town Hall and enquired what it meant. The plaque, in cast iron, read ‘Cearnóg Uí Bhroin’ meaning ‘O’Byrne Square’ one of the proposed changes. Regrettably, it has since been removed, but the questions still remain, were the alterations enacted? and if so, what became of the wall plaques of the new street names? or were they too costly to have cast at the time? or is the address at which you live today incorrect? That’s food for thought!