"Under the Stairs": A Wicklow War of Independence Diary by Stan O'Reilly 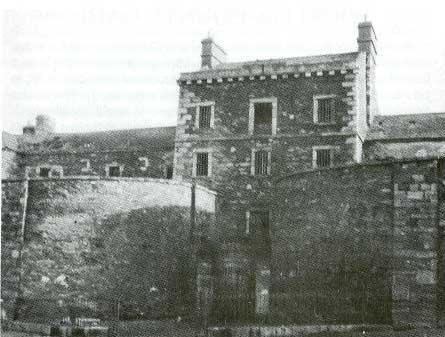 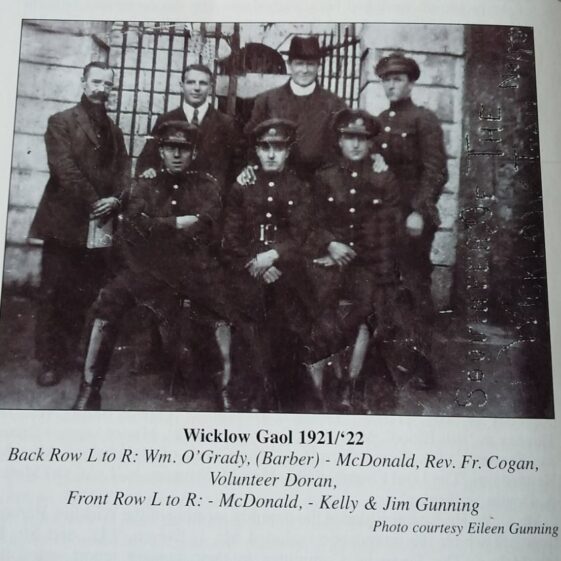 William O'Grady (far left) and others outside Wicklow Gaol, circa 1921/1922
Photo: Courtesy of the Wicklow Historical Society Journal 2011

“[William and Henrietta O’Grady] ….lived and brought up their vast family in Wicklow Town on the east coast twenty six miles south of Dublin. A pleasant seaport of grey stone nestling around the mouth of the River Vartry and dominated by imposing churches of the Catholic and Protestant faiths perched high on opposing hills. Father had been born and brought up in Waterford further to the south, and went across the water to London to serve an apprenticeship in a hairdressing saloon somewhere in the Pentonville Road. The only reason I know this is that once when we went to London he pointed out the saloon. He hardly ever mentioned his family and did little or nothing to keep in touch with them except when news arrived of the death by drowning and his bowler hat was taken down from the top of the wardrobe to be given a good dusting before his departure for the funeral. Quiet as he was at home he found, he found time not only to be a leading figure in Sinn Fein but also to be a well respected Town Councillor. Unfortunately the hair dressing saloon never made the money hoped for and became more and more of a burden to well beyond his dying day. Mother was the radiant sustaining one-though none of us children had any real inkling of the real difficulties she had in coping with father’s increasing ill health, the mortgage, the bills, keeping us fed and well dressed for outside eyes. Worn out by it all and twenty one pregnancies she died at sixty three. I was the child of the nineteenth pregnancy.

On the 17th of November 1920 my mother, Henrietta was in labour when the Black and Tans burst their way into our house on Main Street, Wicklow, in search of arms and my father who was a local leader of Sinn Fein. To force her to reveal his hiding place they snatched away my little wet body almost as soon as it was delivered and, as far as she knew, my life was over before it had even begun. The terror and wailing must have been awful.  The details have been lost in the mists of time and, perhaps a vanishing of legend. It was not something my parents cared to discuss nor did I ask all the questions I should have. William, my father, who suffered so much in the cause of Irish freedom, remained almost entirely silent about his underground and political activities. The tangible memento I have is his medal. As it was I was found alive and presumably well under the stairs by the front door while father was frogmarched up the street to Wicklow Gaol with a pistol at his head and steel tipped boots hacking at his ankles. The Black and Tans were not the most gentle of mercenaries. (Local lore related to this writer stated he was also beaten with barbed wire on the way to the Gaol during one of the raids on his home, the truth of the matter has been lost in the passage of years but one can well believe that he was not well treated by his captors.)  He remained in prison in Wicklow and Mountjoy until I was old enough to remember the day of his release. A day when my mother took me and my two small sisters to Glendalough where, with her arms clasped to the wall of the round tower, she prayed for his homecoming. He was in the house when we returned. Too young to take in and understand her great joy I can, at least, remember the occasion. I was far too young to know what went on at meetings held in our house but many years later Aunt Fanny, a Barlow from mother’s side of the family, told me the Black and Tans also raided the Barlow fish shop and house, only a few yards away, where they failed to find a cache of arms hidden around the bend behind the cistern.

However I can recall a night when mother was out and one of the men attending a meeting in our front parlour called up the stairs to pay for the use of the room. I think a couple of shillings was due. They must have been mightily polite plotters. I was in bed with my sisters Patricia, hereafter called Pat, and Mary in the bathroom which had been converted to house the junior members of our ever bulging family. A place of pipes whose gurgling and plonking kept us huddled together in a cocoon of giggling fear. Though I was the junior child or, more accurately, because the other two were able to boss me, I was sent downstairs to make the collection. Even then I knew every penny counted. I got my reward when mother praised me with the words ‘’Well done my child: handsome is as handsome does.’’ Words that stuck. I was very much the ugly duckling of the family.

From all this you might well imagine an outgoing all-Irish Nationalist household. Far from it. Even though father addressed meetings and the local ‘action’ committee met in our front parlour, from which they were eventually rejected by mother on the grounds that they were wearing out the linoleum, pictures of the King and Queen and all the Royal Family hung on our walls. Indeed, later on during the Second World War, it was father who encouraged me, two of my brothers and two of my sisters to join the British Forces. It was not England he was against, it was her occupation of his beloved Ireland with no more justification than arguments of irrelevant history. A kinder, more gentle, man could not have been found. He was far removed from the stereotype image of a freedom fighter.

Sheelah married the man who was to become the Governor of the Caribbean colony of Monserrat and she wrote ‘Irish sugar planters and slaves had gone there in the early years of the 17th century. – So Irish was the island that Hibernia and her harp graced the island’s crest, a large green shamrock stood atop Government House and great play was made in all tourist publicity about this other ‘Emerald Isle.’ Both Princess Anne and Prince Charles visited the island during her time there and with her husband, Sheelah was received by the Queen. She and her husband also featured on a Monserrat issue stamp with members of the Royal family. William O’Grady would have been hugely proud of his daughter and her achievements, he would also have been proud of her standing, status in life and interaction with the English Royals. A lot of his activities and actions as a revolutionary were not recorded or spoken of as was the case with many others. He wanted the English out of Ireland, otherwise he had no problem with them. It was hardly surprising that he was one of many of his generation who wanted to see any reminders of English control and authority in Ireland and Wicklow removed completely, this included Wicklow Gaol, which was partially demolished in the 1950s, a place where William had spent time, within its miserable, condemned walls in a cold, damp cell.