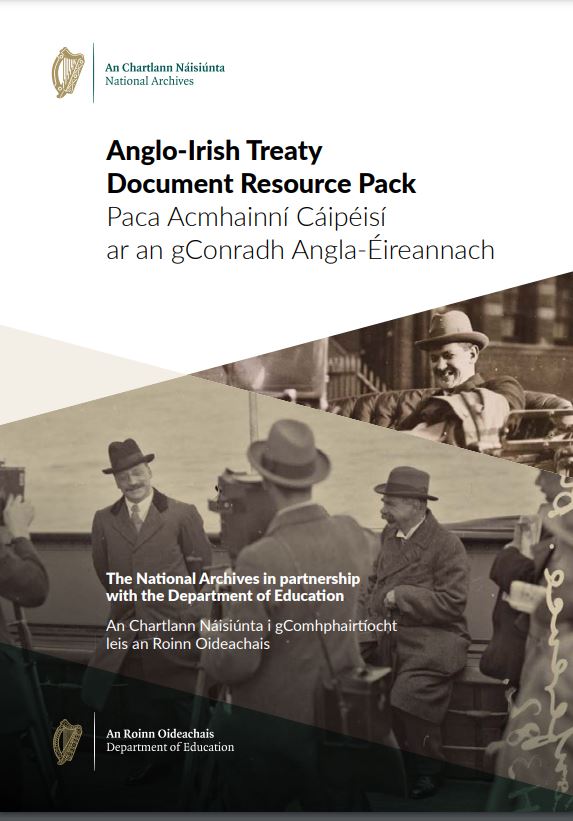 An Anglo-Irish Treaty Document Resource Pack for secondary schools has been developed by the National Archives in consultation with the Department of Education.

This teaching resource is based on Treaty records held in the National Archives and its contents are drawn mainly from the Dáil Éireann record series (DE/2–DE/4) and the papers of Treaty delegate and Minister for Economic Affairs Robert C. Barton. The DE/2 series consists of the administrative records of the Dáil Éireann Secretariat (1919–1922) relating to the Anglo-Irish Treaty negotiations while the DE/4 series contains the proceedings of the First and Second Dála (1919–1922) and papers relating to the peace negotiations of 1921.

The pack is intended for use as a supplementary source by teachers and students in parallel with their course work. It provides students with the opportunity to work with primary source material in the form of reproduction records relating to the negotiations and signing of the Anglo-Irish Treaty of 1921.

These are self-contained units which can be explored either separately or in tandem with each other and teachers can decide which units and in what order to engage with in the classroom. The eight key documents are accompanied by associated questions and tasks which are categorised according to Junior and Senior Cycle and Transition Year levels. These records are complemented by supporting material such as delegate biographies, a timeline and an explanation of the Treaty’s content.

A hard copy of the resource pack will be distributed to secondary schools across the country and it will be available to download at www.nationalarchives.ie.