You are here: HomenextTopicsnextWICKLOW 1914-1923nextWORLD WAR InextWicklow Women in the Great War by Brendan Flynn

Wicklow Women in the Great War by Brendan Flynn 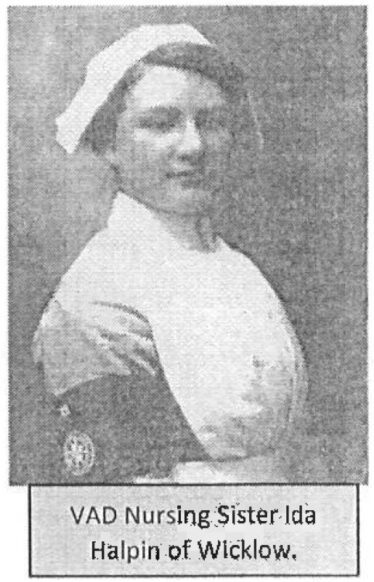 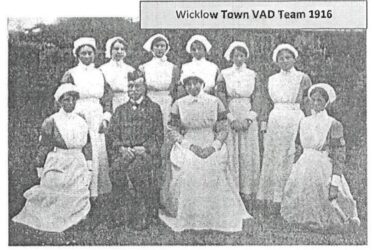 Two related reasons prompted this article about the role of Wicklow women in the Great War.  Young, single, middle-class women disappeared from social view in Wicklow in the early part of 1915 and there is a dearth of information and literature about what they were actually doing!

If you asked anyone in Ireland today to close their eyes and picture a scene from the Great War, that scene would inevitably be a labyrinth of trenches in the mud, or possible long straggling lines of young men attacking across a barren,muddy landscape while being mowed down by artillery shells and machine guns.  And this truly awful war was just like that. But the image never includes women, even though most of the wounded survivors of those attacks were treated within hours by women. Those women washed their broken bodies and all too often held their hands while they took their last breath.  What makes that scene quite bizarre, is that most of the soldiers were working-class, while most of the nurses were middle-class women who would never have dreamt of doing such an outré thing just a few years earlier. This series of articles (see link below) sets out to explain that conundrum, by showing exactly what the women of County Wicklow did during that war.  It is a story of self-sacrifice, endless effort and a constant striving towards doing everything humanly possible to help their country and its young men in their hour of need……..