With the outbreak of the First World War, thousands of families across Ireland bade farewell to husbands, fathers, sons and brothers, bound for the Continent and the Front.  Of these soldiers, vast numbers of whom would never return to their home soil even for burial, many were born and raised in County Wicklow.  They signed up for a multitude of reasons whether out of patriotism, a sense of adventure, or to prove themselves.  While their motivations may not have been the same, they all had in common a shared heritage, a way of life and a home county, that of County Wicklow.

Drawn from the collections of the National Library of Ireland, Wicklow County Archives and Wicklow County Council Library Service, these images aim to give an insight into the realities of the First World War for those who were left at home in Co. Wicklow, waiting for news from or about their loved ones. 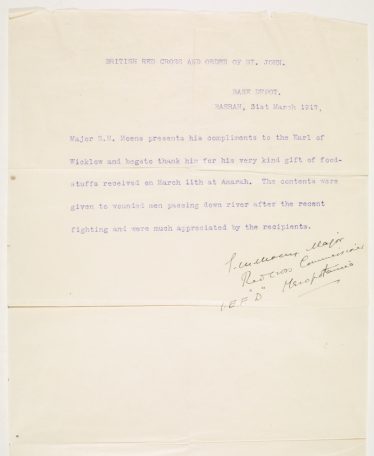 Letter of thanks from Major S. Moens

Letters, care packages, food parcels and other supplies sent from home were very much part of the experience of war.  Although subject to censorship, letters and other items were sent back home too, often containing details of the most everyday occurrences.  Many of the wealthier families sent supplies not only to members of their own family but to other groups of soldiers throughout the war years.  The Earl and Countess of Wicklow were one such family with their gifts benefiting significant numbers of wounded men.

Messages sent by telegraph often conveyed bad news and were usually brief communications.  Because of the nature of correspondence during the war, information regarding the well-being of family members could sometimes be delayed or the details confused.  Lord John (Jack) Hamilton, brother of the Countess of Wicklow, was killed in November 1914 at Ypres, Belgium.  He, along with his brother, Claud, kept up frequent correspondence with their sister in Arklow. 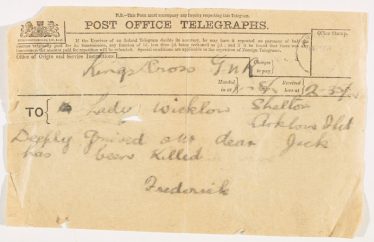 Administration of the County

Associations with the war in Wicklow were not, however, limited to supplying young soldiers.  Apart from Arklow’s notable contribution to munitions production via the Kynochs plant, the County Council and Boards of Guardians continued the administrative tasks of the county throughout the war, much as before, although the nature of many of the matters reflected the move into wartime.  Minutes of meetings from 1914 and 1915 describe a variety of war-related issues from the support of Belgian refugees in the county to increased prices for pharmaceutical supplies due to increased demand elsewhere. 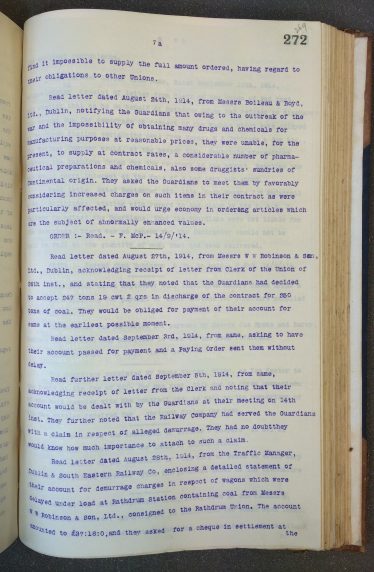 The full exhibition of “Wicklow’s War: the First World War in County Wicklow” will be on display in Blessington Library from July 21st to August 16th, and in Greystones Library from August 21st to September 6th, 2014.  The National Library of Ireland’s exhibition “Gallant Sons”, concerning Irish men who fought in WW1 will also be on show.

To provide a context for the materials on display, historian John Goodman will speak in Blessington Library on Tuesday July 29th at 7pm and in Greystones Library on Tuesday August 26th at 7pm.  His talks will look at a number of Co. Wicklow men and their frontline experiences as well as discussing how the war directly affected life back in Wicklow.

For more information on the above exhibition and talks, please contact Blessington Library on 045-891740 or Greystones Library on 01-2873548.