You are here: HomenextTopicsnextWICKLOW 1914-1923nextWicklow 1916next1916 Compensation Claims and the Property Losses Committee - A Wicklow Interest

1916 Compensation Claims and the Property Losses Committee - A Wicklow Interest 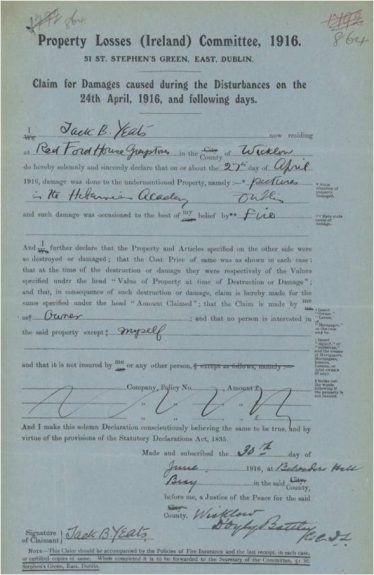 zoom
Extract from claim by Jack B Yeats
https://centenaries.nationalarchives.ie/centenaries/plic/index.jsp

The Property Losses (Ireland) Committee (PLIC) was established in June 1916 to assess claims for damages to buildings and property as a result of the destruction caused by the 1916 Rising. The Committee succeeded the Dublin Fire and Property Losses Association, which had been established in May 1916 by business interests and property owners who met on 8 May 1916 in the Mansion House, Dublin. Led by well-known businessman William Martin Murphy, the Association exerted pressure on the Irish Parliamentary Party and the British government to provide compensation to those who had lost their business or property and to provide for the associated costs of rebuilding in the wake of the Rising.

A total of 6,567 claims have been digitised by the National Archives of Ireland as part of their 1916 Commemoration programme. These provide a huge research resource that can be accessed by clicking on their website HERE.


The collection provides a unique and interesting perspective on the social and political history of the time.Below is a selection of claims made to the Committee with a Wicklow interest attached.

Painter, Jack B. Yeats, brother of William Butler who was a resident of Redford House, Greystones made two separate claims. One of these claims was for £47 5s for three paintings destroyed by fire at the Royal Hibernian Academy, Abbey Street Lower, Dublin. Payment of £26 7s was recommended by the Committee which was contested by the claimant but later rejected.

Another claim for £3 3s for an original drawing destroyed by fire at Maunsel and Company Limited, publishers, 95 Abbey Street Middle, Dublin was recommended in full by the Committee.

Cornelius Allen, of 1 Coolgreaney Road, Arklow claimed for damage to his property following a search by Crown forces. This claim was not proceeded with.

Arthur B. Brennan, Main Street, Arklow, claim for £7 10s for loss of gold watch under repair at Hopkins and Hopkins, jewellers, Sackville Street [O’Connell Street], Dublin. Payment of £4 10s was recommended by the Committee.

John Maguire, Dunlavin, a publican’s assistant claimed for £6 18s 6d for loss of clothing by fire at Moore’s public house, 14 Eden Quay, Dublin. Payment of £6 10s was recommended by the Committee. William Reilly, another publican’s assistant of Kilmullen, Newtownmountkennedy at the same public house had a similar claim which was also recommended by the Committee.

Lieutenant Arthur Lindsay, Woodstock, Newtownmountkennedy, claimed for £26 5s for seizure of personal effects by insurgents from motor car at Church Street, Dublin. Payment of £18 10s was recommended by the Committee.

Cecil Ross Kitching, Blessington, claim for £65 for destruction of motor car under repair at the premises of JJ Keating, cycle and motor dealer, 3 and 32-33 Abbey Street Lower, Dublin. Full payment recommended by the Committee.

N Haskins, junior, Usona, Church Hill, Wicklow Town representing his brother in France claimed for £5 for destruction of bicycle by fire at JJ Keating, cycle and motor dealer, Abbey Street Middle, Dublin. Claim declined by Committee as it was received past the deadline for submissions.