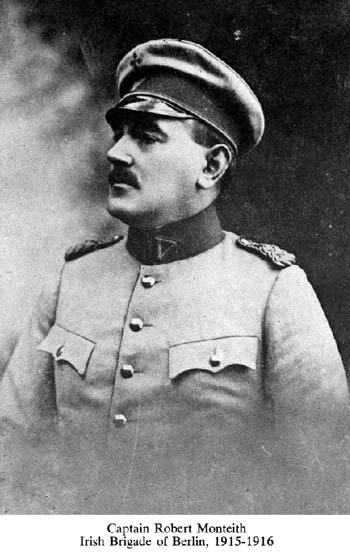 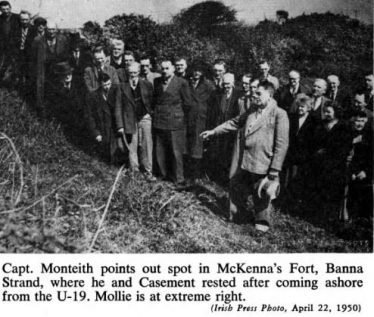 Robert Monteith was born on  1st March 1878 at Woodstock Demesne, Kilcoole.  His father Joseph was a steward at the estate.    He was baptised at Christ Episcopal Church in the parish of Delgany, in the Diocese of Glendalough.

This information below is extracted from the Irish Brigade website where the full story may be accessed.

His eldest brother Jack left home to study to become an engineer; the next brother Dick ran off and joined the British Army. At the age of 16 Robert followed suit joining the Royal Horse Artillery, and went off to England to do his training. His British Army Service Record exists, and is very informative. Following a total of 16 year’s service in the British Army in India and South Africa, Bob arrived back to Ireland where he eventually settled in Dublin with his wife Mollie. There he secured a job as civil servant at the Ordnance Depot at Island Bridge in Dublin, situated close to Phoenix Park. During his time in Dublin he became exposed to James Connolly and the trade union movement, as well as the Irish Volunteers, an organisation  he subsequently joined in 1913.

From Dublin To Germany

With England’s entrance into World War I, August, 1914, recruiting for the British Army became a high priority for the government. Having become sympathetic to the Irish Cause, Bob refusal to enlist in the British army cost him his  job at the Ordnance office and resulted in a deportation order for him to leave Dublin. Following a spell in America, Bob was then stationed by the Irish Volunteers in Germany, his role being to assist Roger Casement in the training of the newly formed Irish Brigade in Berlin.  Bob enlisted to head to Germany to assist Roger Casement

From Germany To Banna Strand

In 1916, when news of the planned Rising became known, plans were made to send the Irish Brigade along with a stock of weapons to Ireland aboard the Aud. It was decided that Casement, Monteith and  Bailey ( a sergeant in the Irish brigade) would  set off in a submarine ahead of the volunteers, which they did on 15 April 1916.

The submarine reached Tralee Bay in Kerry on 21 April.  The reception committee from the Irish failed to materialise. About 2 a.m., Robert Monteith, Daniel Bailey (calling himself Beverly), and Casement climbed into a small boat for the trip to shore. Their boat capsized before they reached Banna Strand, near Tralee. Monteith helped an exhausted Casement to safety on shore.

Casement was convinced that the Rising could not work without a large number of German troops, and the best he had been able to obtain was one boatload of arms. Leaving Casement at the ruins of McKenna’s Fort, Monteith and Bailey headed for Tralee. About 1:30 p.m., Casement was discovered by two Royal Irish Constabulary officers.

Monteith avoided capture, unlike his two companions, and in December 1916 was finally able to make his escape from Ireland to Liverpool, and then on to New York. The transatlantic journey he made using the false papers of a stoker, and acted that role, for which he was not physically capable, with difficulty. Eventually he was put on lighter work, and managed to get ashore in New York undetected. 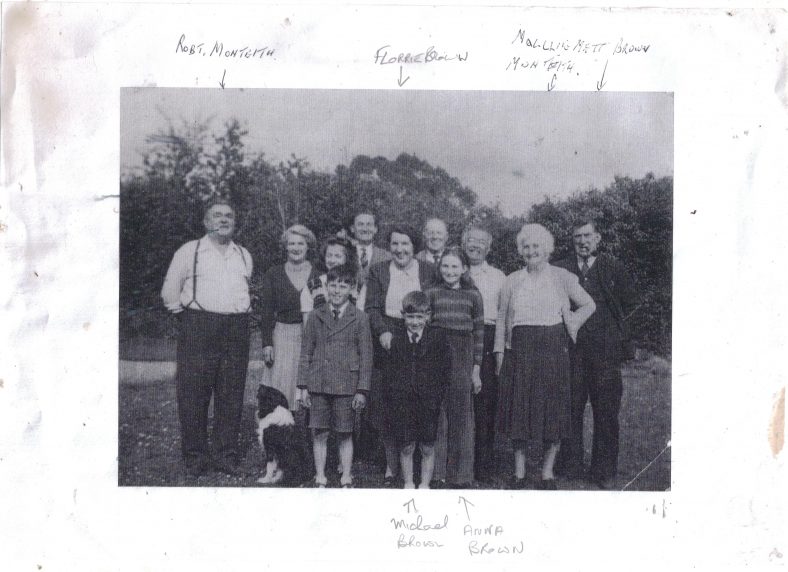 Bob Monteith and his wife made a return trip to Ireland in 1947 where they were greeted by President Eamon De Valera. They settled for a time on Sea Road in Kilcoole before returning to the U.S to live their last few years before passing away on 18th February 1956.