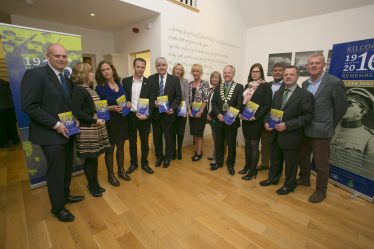 More than 30 individual projects and events are planned for County Wicklow to commemorate next year’s 1916 Easter Rising centenary. These range from historical festivals and re-enactments to book publications, drama and more.
The Centenary Commemoration Programme, launched recently by Minister of State, Mr Simon Harris TD, was produced by the Wicklow County Council 2016 Steering Group following consultation with the public and interested parties.

The Programme of Events highlights Co Wicklow’s strong links with the 1916 Rising, while flagship events include:

More details on these and other events are available on a dedicated website www.wicklow2016.ie

Speakers on the night

Speaking at the launch of the Commemoration Programme in Ashford Community & Heritage Centre on Friday night, the Cathaoirleach of Wicklow County Council, Cllr John Ryan, said next year’s celebration “presents us with a once in a century opportunity to create projects and events of celebration and remembrance.”

He added that following an advertising campaign and an interactive public meeting, a number of high quality projects were forwarded for inclusion in the programme. These, combined with projects devised by members of the Steering Group comprise the Programme – 30 projects and rising, as further events can be added to the programme throughout the year.

Thanking the members of the Steering Group for their commitment, hard work and vision, Cllr Ryan said: “It is clear that there is something for everybody in the programme and I hope that every person in Wicklow will participate and make the coming year one for all to remember. This evening let us remember 1916, and that pivotal period in our history, let us reflect on the past 100 years and let us re-imagine and celebrate our future legacy.”

Launching the Programme, Minister of State, Mr Simon Harris TD, said: “This rich commemoration programme illustrates the huge level of enthusiasm and interest which exists here in Wicklow for acknowledging and celebrating what was a pivotal event in this country’s history.”

The plan, he said, was a credit to the community spirit which has been unleashed across Wicklow and the “can-do” attitude of local groups who are helping to make the commemorations a meaningful event for people across the county. He also commended Wicklow County council for its proactive approach to the project.

“Through this plan Wicklow is playing its part in making Ireland 2016 a truly national initiative. Your contribution and support will enrich the Ireland 2016 programme greatly”, said Minister Harris.

Guests at the launch were welcomed by Mr Michael Nicholson, Director of Services, Community, Cultural and Social Development, Wicklow County Council, who said the Co Wicklow Programme followed extensive public consultation and was inspired by the underlying Ireland 2016 themes of Remembering, Reflecting and Reimagining.

He added: “I am pleased to say that the spirit of diversity, inclusion, imagination and inspiration has informed the projects and events planned in our Programme for 2016.” 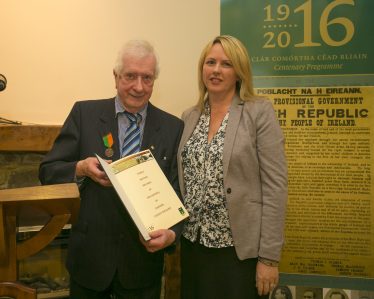 Mr Nicholson introduced a special guest at the event: Mr Michael Giffney Junior, son of Michael Giffney Senior who fought in the GPO in 1916 and was wounded in Henry Place and captured.

Michael Giffney Senior survived the Rising and died in 1951 and is buried in Rathnew Cemetery. The Giffney family are originally from Ashford.

An exhibition of memorabilia and postcards from the era will be on display in Ashford Heritage and Community Centre.