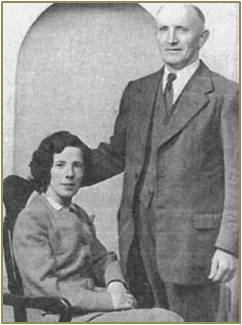 Mick McDonnell and his daughter Sheila

According to Californian State Records, Michael Joseph McDonnell was born on the 8th August 1889. However, between 1937 and his death on the 15th of July 1950, there is no reference to him in United States Social Security Records. Michael Joseph McDonnell was a man acutely conscious of his own personal security, and the type keen to avoid Government agencies keeping records on him. He was born on the 8th of August 1889, in the townland of Rathduffmore, near Knockananna village, Co. Wicklow, the eldest child of Michael and Julia McDonnell, nee O’Toole. His siblings were Mary, Nan, Kit and his brother Dan.

With practically no employment locally, there was a custom of people leaving the local area to work in the Dublin breweries and on the railways. So after initially working on the family farm, Mick McDonnell moved to Dublin to seek employment. In Dublin, Mick met and married Ellen O’Toole. They had one child, Sheila who was born in 1913. According to The 1916 Rebellion Handbook, published in 1917, Mick McDonnell is listed as a “labourer” residing at 84 North Strand Road. However, subsequent research shows that McDonnell gave this to the British as a false address, and there is no record of him ever residing there. Sometime before 1919, Mick and Ellen McDonnell appear to have separated, and he moved to an address at 3 Richmond Cottages, off the North Circular Road.

In 1921, according to evidence held in the National Archives and in the Department of Defence, Michael Collins sent Mick McDonnell to California for health reasons as he was suffering from TB. There are also some indications that he may have gone to the United States on a special mission. The truth may in fact be a mixture of both. In California, Mick divorced his wife Ellen and married Eileen O’Loughlin, who had travelled out to the United States to be with him. A daughter and son were born to them.

While living in California Mick remained in touch with some of his former comrades in the Old Dublin Brigade, in particular Jimmy Slattery. He remained a member of the IRB, being involved with Clann na Gael and the Irish societies in the San Francisco and the Santa Clara Valley area. He also held an agency for the Irish Hospitals Sweepstake, which was illegal in the United States and sources have indicated that at times he acted as a confidential courier for Clann na Gael. Contact between Mick, Knockananna, and his Irish relatives appear to have been fairly sparse, but he returned to visit Ireland on at least two occasions, in 1938, and again in 1948. During his 1948 visit, a get together was held with the surviving members of The Squad. They had a group photograph taken which was framed and signed by the survivors and presented to Mick.

1916 Rising and War of Independence

After the Howth gun running, in July 1914, Mick joined, “F” Company, 2nd Battalion Dublin Brigade, Irish Volunteers, and shortly afterwards was sworn-in as a member of the secret Irish Republican Brotherhood. In early 1915, Mick received confidential information that four packing cases, containing one hundred rifles, addressed to John Redmond MP, leader of the Irish Parliamentary Party – then actively supporting the British war effort – had arrived at the North Wall for the use of the National Volunteers. McDonnell organised and led the raid in which the arms were seized, and conveyed to the farm of Frank Lawless, at Swords, in North Co. Dublin, where they were stored, and subsequently distributed to the Irish Volunteers. During the 1916 Rising, Mick served as Garrison Quartermaster at Jacob’s factory under Captain Tom Hunter and Commandant Thomas MacDonagh. In the course of Easter Week, Mick was promoted in the field, to the rank of 2nd Lieutenant. After the surrender Mick was held for a time at Richmond Barracks, before being deported to Knutsford Jail and later Frongoch Internment Camp, in North Wales, where he held the position of Camp Cook. There, with men such as Michael Collins, he was prominent in re-organising the IRB, and with redrafting the future strategy for the IRA and subsequent War of Independence. Following his release at Christmas at Christmas 1916, Mick was at work re-organising the Republican Movement. Appointed Battalion Quartermaster, 2nd Battalion, Dublin Brigade, with the rank of Captain, he replace Michael O’Hanrahan, who had been executed by the British in Kilmainham in 1916. Early in 1918, Mick was instrumental in organising the seizure of a large consignment of gelignite from the Great Northern Railway at the North Wall. He remained with the 2nd Battalion, until his appointment as the O/C of The Squad, early in 1919. It is well worth noting here, that it was Mick McDonnell, and not Michael Collins, as it is consistently claimed, who first advocated the setting up of a Special Services Unit or “Squad” to assassinate “G Men” who had picked out the 1916 leaders for the British execution squads, and who were now again closely watching the leaders of the new resistance movement, then under re-construction.

In the autumn of 1919, the Dail Cabinet and IRA GHQ Staff decided upon the execution of the entire British Cabinet and editors of newspapers, antagonistic towards Ireland. Liam Toibin, Assistant Director of Intelligence was in charge of this operation and travelled to London with Mick McDonnell and George Fitzgerald to gather intelligence. Mick returned after two weeks leaving the others behind. Mick’s report was not favourable, however, owing to the lack of assistance they had received from the London Brigade IRA, and to the impossibility of making a simultaneous swoop on the entire British Cabinet, and other people earmarked for execution. The abandonment of the idea caused a bitter dispute between Cathal Brugha, the Minister of Defence who was in favour of it and Michael Collins, Director of Intelligence, who was against it.

On 19th December 1919, Mick was involved in the assassination attempt of Lord Lieutenant French at Ashtown train station, Co Dublin. There were two cars in Lord French’s convoy taking him from the station to the Vice-Regal Lodge in the Phoenix Park. The ambushers thought he would be in the second car but he was in the first and drove through their blockade. A fierce gun battle then broke out as the ambushers turned their attention on the 2nd car but it quickly became apparent that their intended victim had made good his escape. Martin Savage died at the scene from a shot by a British Army soldier perched at the rear of the first car containing Lord French. 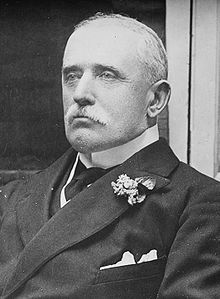 On 26th March 1920, Mick was heavily involved in the execution of Alan Bell, who was a member of a secret committee which ran a Secret Intelligence Operation, directed from Scotland Yard, and were believed to be responsible for running a Sub-Rosa Murder Gang, then starting to operate nationwide. He was executed by The Squad on the corner of Simmonscourt Road, Ballsbridge, Dublin. His widow, Ellen Sheriff-Bell received the largest compensation award paid out during the conflict to the relative of any victim.

On Saturday the 15th of July 1950, Colonel Michael Joseph McDonnell, Commanding Officer of the GQ Squad died suddenly of heart failure in Henard Hospital, Los Gatos, California, and the first symptoms of illness having only come on the previous evening. He is buried in Santa Clara Catholic Cemetery, Lincoln Street, Santa Clara, California, at Block 9A, Lot29J. The simple inscription on a fine granite headstone reads: “Michael McDonnell 1889-1950 Native of Ireland”. A Requiem Mass was celebrated at University Church, St. Stephen’s Green, Dublin on the same day of his burial in California.

This article is by Shay Courtney and extracted from Cnoc an Eanaigh Knockananna: the Hill of the Marsh: stories of Knockananna from yesteryear published by Knockananna History Book Committee in 2006. See also Tom Keogh of Knockanna article on this website