Alfred Patrick Blinco was born at Ballyguile on the outskirts of Wicklow Town on the 17th January 1894, his mother was Jane Blinco formerly Boland from Ballyguile. His father, Alfred Blinco is noted as deceased on his son’s Birth Certificate and is stated to have been a Sergeant in the Army. This would have been the British Army and he was probably English as Blinco is an English name.

Alfred’s mother remarried Thomas Cummings, another English soldier who was a widower with a son Victor Cummings, my grandfather. His late wife was another Wicklow girl Kate Manning. Thomas Cummings was a corporal in the 1st. Battalion the Prince of Wales’ Leinster Regiment (Royal Canadians)

I cannot trace a date for Kate Cummings nee Manning death or for Thomas Cummings and Jane Blinco’s wedding but there is a record of a Mrs. Cummings and two children sailing to Calcutta in 1898 so they married sometime between 1894 and 1898. The Leinster Regiment served in India during those years and I presume Jane and the two children were going out to join him in India.

Back in Ireland the 1901 Census records Thomas Cummings, now a “Barracks Labourer” as living in Portobello Barracks with his wife Jane (Blinco) and his son Victor. Alfred Blinco is recorded as “Alfred Blencoe” staying at his Grandmother Bridget Boland’s house in Ballyguile Wicklow.

Ten years later in the 1911 Census we have Jane Cummings (Blinco) her son Alfred Blinco and step-son Victor Cummings living at 39 Harold’s Cross Cottages. Thomas Cummings has died by this time. I have been unable to trace his death details so far.

In 1916 Alfred Blinco was an active member of C Company, 4th Battalion, Dublin Brigade of the IRA. He was a qualified motorcycle mechanic and worked at Waytes Brothers in Lemon Street in Dublin. Early in Easter week his Commanding Officer Thomas McCarthy called him out of work and asked him to drive a motorcycle and sidecar, with Thomas McCarthy’s brother Dan in the sidecar. They were to drive behind and act as a following escort for Liam Mellows, dressed as a priest (he was a wanted man) who was being driven in another motorcycle combination by Joe Egan, from Lucan to Athenry in Co. Galway where Liam Mellows was to organise the Rising in the West. They were depending on the German guns to be landed by Roger Casement in Kerry but as we all know this never happened and the Rising in the West suffered very badly due to the lack of proper arms. Alfred and the other motorbike men got back to Dublin late on Holy Saturday night.

On Easter Monday morning Alfred mustered at Emerald Square and went in to fight in the South Dublin Union under Eamonn Ceannt. Unfortunately he had an accident at the back of the Union on the first day where he fell heavily and injured his abdomen. He was treated on site and ordered to hand his equipment over to another Volunteer who had none and was ordered home. He left the Union and escaped home to Harold’s Cross. He was treated for his injury by Dr. W. F. Hooper of 27 Kenilworth Square. He lay low at home for a few days when British soldiers came and searched the house. He was arrested and taken to Portobello Barracks but as nothing incriminating had been found at his house he was released after a few hours.

He took no more part in the Rising but remained active in the War of Independence. His wife details one instance of his activities in the Military Pension Application File where she tells of a journey he made by car in August or September 1918 to bring rifles, revolvers, and ammunition to Mr. Dan O’Rourke a schoolteacher and local IRA Commander at Castlerea in Co. Roscommon. Alfred brought his wife and baby daughter Sheila with him on this trip.

We next hear of Alfred during the Civil War when on the 4th November 1922 he joined the 2nd Eastern Transport Division of the National Army at Gormanstown Camp. He served his full attested time and was discharged on the 2nd January 1924. Sadly only four months later on the 4th April 1924 Alfred aged just 29 years died from tuberculosis at Dr. Steeven’s Hospital in Dublin.

His widow Margaret, whom he married in 1917, made an unsuccessful application for a pension on behalf of herself and her two children Sheila and Bartholomew(Barry) maintaining that Alfred’s military service contributed to his death. Unfortunately he had been medically examined shortly before his discharge and found to be “fit”.

To back up this story I have the following documents: Copies of Alfred Blinco’s birth and death certificates. Copies of the 1901 and 1911 Census returns for Alfred. 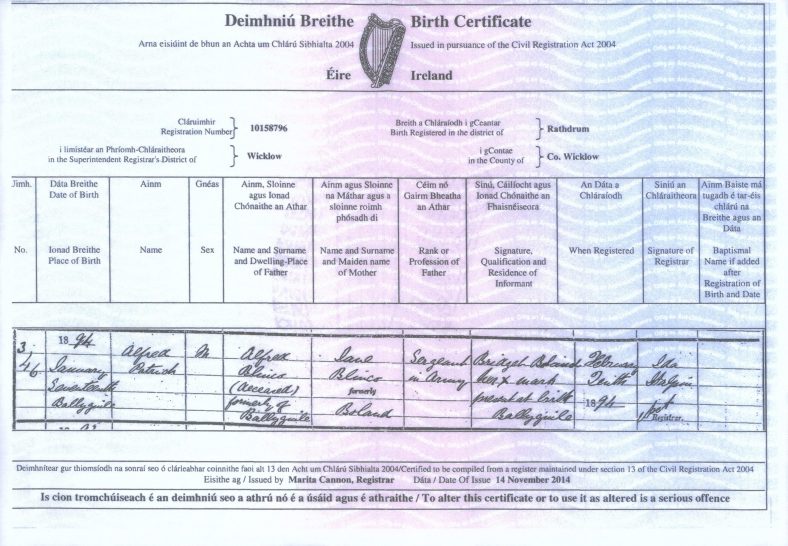 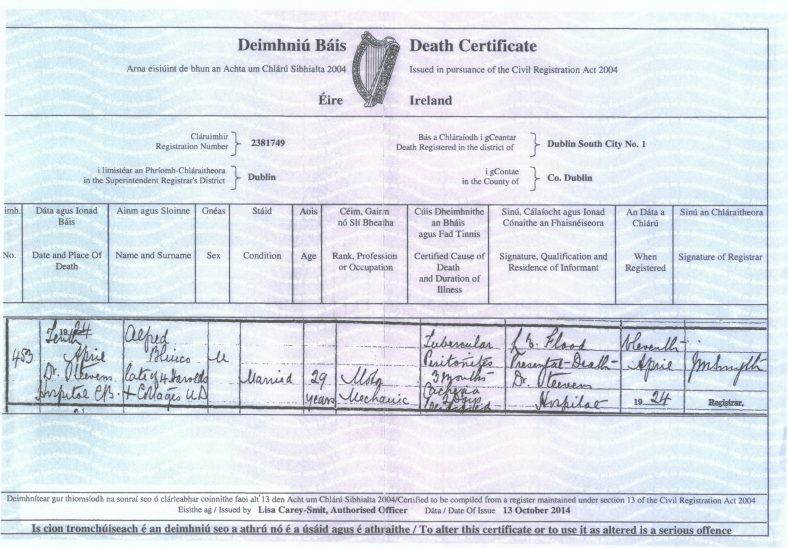 Bureau of Military History Witness Statement W.S. 307 Thomas MacCarthy page 16 refers to Alfred and the 1916 motorcycle incident and names Joe Egan as the other driver. There are another three men who are named as driving the Mellows motorcycle in three other Witness Statements, W.S. 298 Ailbhe 0′ Monachain, W.S.694 Feargus De Burca, and W.S. 1164 Michael Manning. I think these three are all mistaken.

Thomas MacCarthy also refers to Alfred but spells his name incorrectly as Blanko in his Military Pension Application ref: MSP34REF59024

Letters from his widow in her Military Pension Application Alfred Blinco ref: 4D25 describe his 1916 activities and his subsequent War of Independence gun moving activity. The man named by her as the recipient of the guns a Mr. O’Rourke and his identity is confirmed in other Witness Statements ref: W.S. 718 Sgt. T Crawley and W.S. 691 Matthew Davis.

Photograph of his gravestone in Mount Jerome Cemetery, his mother is interred in the same grave but her name is spelt incorrectly as Cummins which should be Cummings. Another female was interred in this grave in the 1970’s whose surname was not Blinco. It is possibly Alfred’s daughter Sheila buried under her married name. The cemetery cannot divulge this information except to next-of-kin. Her name was not put on the gravestone.

The Captain of each Company of the 4th Battalion was invited out to afternoon tea at Old Bawn. Cathal Brugha, Willie Pearse and Eamon Ceannt were there. That was on a Sunday, a fortnight before the Rebellion, and it was there that each man who had to take charge of the different places got his orders as to where he was going. We were called into a separate room where we were given our orders and told what buildings we were to take possession of. We were asked questions about whether we knew them and so on. As far as I can remember I was not asked or told anything of military use. I got instructions that I was to occupy
Roe’s Distillery, Mount Brown, but I was not told what military advantage was to be gained by occupying it – just to take the building and hold it – and, with great respect to the dead, I could not see the military advantage at all.

With regard to arrangements for the Rebellion, on the Good Friday we took a list of where the men worked, what their business was, and so on. There was a man in my Company called Blinco employed in Waytes Brothers, Lemon Street, off Grafton Street. I was asked could I get motor-bikes with sidecars and I said I could. I asked Joseph Egan if he was game and he said he was, although he was not connected. Joe Egan had a motorbike and sidecar. James Styles, the cycle shop in Ellis’ Quay, had a motor­bike with sidecar. I went to Waytes Brothers in Lemon Street and I called Blinco out. I was accompanied there by my brother, Dan MacCarthy. I told Blinco either to  phone or send a wire back to his job saying that he would not be able to go back as he had got news of some of his relations being ill. I took him with me up to Styles’  shop in Ellis’ Quay where we took out the motor bike and sidecar and conveyed my brother in Styles’ sidecar. Joe Egan’s motor-bike was put into use by taking Liam Mellows, dressed in clerical garb, in the sidecar to Athenry, County Galway. Joe Egan at the time had no knowledge of who the reverend clergyman in the sidecar was. The escort following Joe Egan and the “clergyman” was Blinco, with my brother Dan McCarthy in the sidecar. It turned out a terrible day with awful rain. The escort had to watch the road for the marks of the tyres of the other motor-bike so that they would not make a mistake and take the wrong road. They arrived at what my brother described as a fork in the road, Joe Egan and his passenger went one road and the escort took the other road. The escort went a certain distance and when they discovered they could not trace the tyres of the front motor-bike and sidecar, in which the “clergyman” was travelling, they turned back and came on to the other road.

In the meantime a slight accident had happened to the lamp bracket on Joe Egan’s motor-bike and they were trying to do something with it when they heard their escort coming along, and there and then the “clergyman”. said, “By —, here they are”. This was the first time that Joe Egan knew who the “clergyman” was.

Nothing extraordinary happened on Easter Saturday.

On Easter Sunday we were all called to Ceannt’s house. We were told to stand-to after the countermanding order appeared in the “Sunday Independent”.