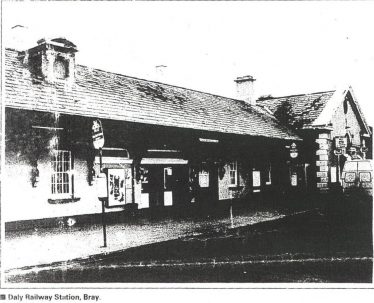 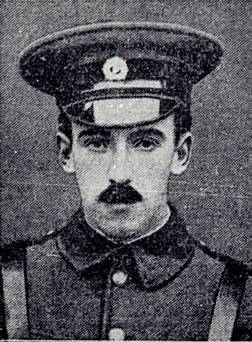 Nowadays,most people call it the DART Station, but officially, it’s still called Daly Station, Bray. I wonder if many of the commuters who dash for their Dublin-bound trains each morn­ing ever pause to consider who this Daly was?

To find the answer, we have to go back to 1966 when Coras lompair Eireann, as part of the nationwide commemoration marking the 50th anniversary of the 1916 Rising, decided to re­name some of their mainline stations in memory of those who took part in the struggle.

In Bray, a brass plaque was placed on the wall of the station, inscribed in both English and Irish. The English version reads: ‘To commemorate the 1916 Rising, this building was named Daly Station in honour of Edward Daly.’

So who was Edward Daly?

A Limerick man, he was one of seven commandants from the Irish Volunteers who met on March 13, 1915, to discuss the possibility of holding a rising the following September. The other six included many other names subsequently to become famous in Irish history – Pa­draic Pearse, Joseph Plunkett, Bulmer Hobson, Thomas McDonagh, Eamonn Ceannt and Eamon de Valera.

Born in 1891 and educated by the Christian Brothers, both his father and uncle held strong re­publican views. His uncle, John Daly (1845-1916) was an active member of the Irish Republican Brotherhood.

In 1884 John Daly was arrested for importing explo­sives to Birkenhead, Liverpool, for which action he was sentenced to life imprisonment on August 1 of that year.

While in Portland Prison he met Thomas Clarke, who was  later to become the first person to sign the proclamation in Easter 1916. While in prison, John Daly was elected T.D. for Limerick. He was released on August 20, 1896. He also held the post of Mayor of Limerick. In his later years he ran a bakery in Limerick.

Meanwhile, his nephew Ed­ward rose to the rank of Commandant, holding command of the first Battalion of the Irish Volunteers during the 1916 Rising. He was in charge of the Four Courts and the area west of the GPO. His sister Kathleen (1879-1972) had married Thomas Clarke in 1901.

The Easter Rising began with the reading of the proclamation by Pearse on the steps of the G.P.O. on April 24 and ended with his unconditional to surrender to General Lowe on April 29.

Along with the other leaders of the rising, Edward Daly was executed in the weeks the fol­lowed.

Other railway stations in the Greater Dublin area to be re­named after leaders of the ris­ing in the 50th anniversary year of 1966 included Connolly (for­merly Amiens Street Station), Pearse (formerly Westland Row), Heuston (formerly Kings-bridge) and Mallin (Dun Lao­ghaire).

It’s interesting to note that all the Dublin renamings have stuck, whereas both Bray and Dun Laoghaire stations are better known by the towns they serve, rather than the 1916 lead­ers they commemorate.