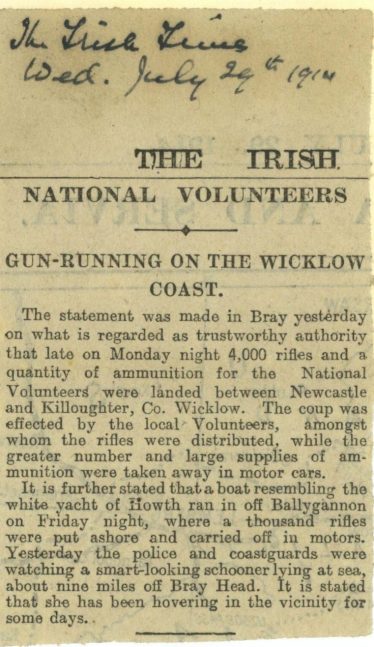 GUN-RUNNING ON THE WICKLOW
COAST.

The statement was made in Bray yesterday on what is regarded as trustworthy authority that late on Monday night 4,000 rifles and a quantity of ammunition for the National Volunteers were landed between Newcastle and Killoughter, Co. Wicklow. The coup was effected by the local Volunteers, amongst whom the rifles were distributed, while the greater number and large supplies of am­munition were taken away in motor cars.

It is further stated that a boat resembling the white yacht of Howth ran in off Ballygannon on Friday night, where a thousand rifles were put ashore and carried off in motors. Yesterday the police and coastguards were watching a smart-looking schooner lying at sea, about nine miles off Bray Head. It is stated that she has been hovering in the vicinity for some days.