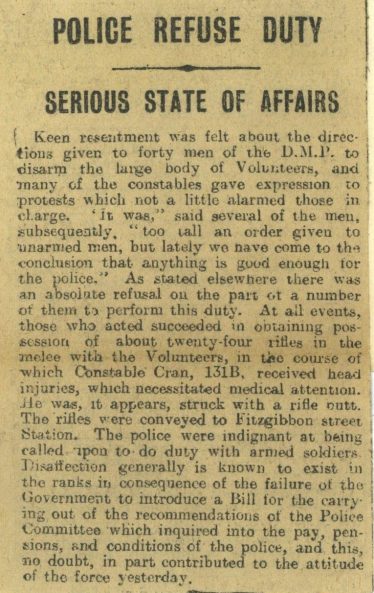 Keen resentment was felt about the direc­tions given to forty men of the D.M.P. to disarm the large body of Volunteers, and many of the constables gave expression to protests which not a little alarmed those in charge. ‘it was,” said several of the men, subsequently. ” too tall an order given to unarmed men, but lately we have come to conclusion that anything is good enough for the police.” As stated elsewhere there was an absolute refusal on the part of a number of them to perform this duty. At all events, those who acted succeeded in obtaining pos­session of about twenty-four rifles in the melee with the Volunteers, in the course of which Constable Cran, 131B, received head injuries, which necessitated medical attention. He was, it appears, struck with a rifle butt. The rifles were conveyed to Fitzgibbon street Station. The police were indignant at being called upon to do duty with armed soldiers. Disaffection generally is known to exist in the ranks in consequence of the failure of the Government to introduce a Bill for the carry­ing out of the recommendations of the Police Committee which inquired into the pay, pen­sions, and conditions of the police, and this, no doubt, in part contributed to the. attitude of the force yesterday.