Letter from the Unionists of Greystones to the Viscount of Powercourt 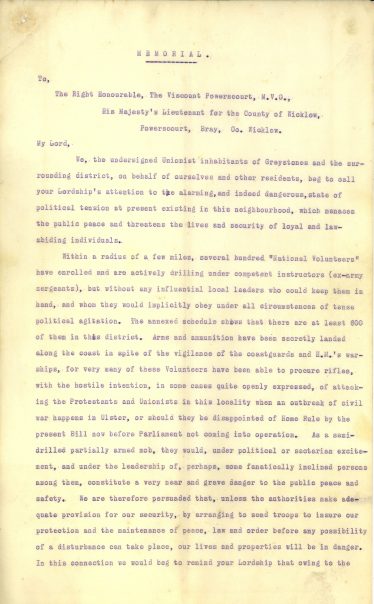 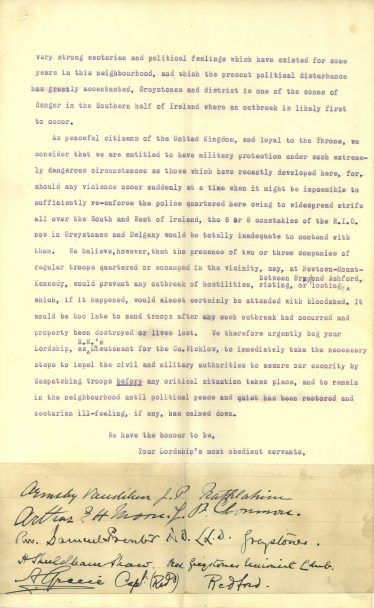 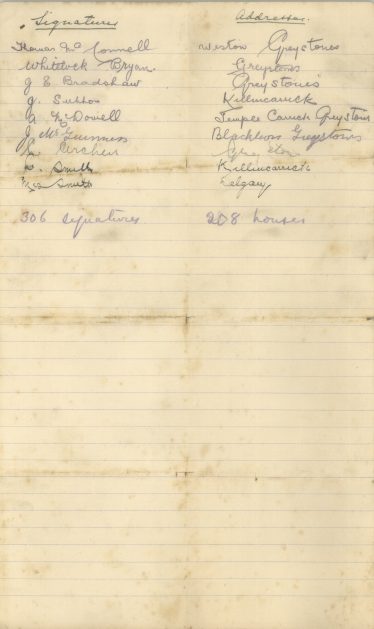 Sample of 306 signatures from 208 houses which accompanied letter

To, The Right Honourable, The Viscount Powerscourt, M.V.O.,

His Majesty’s Lieutenant for the County of Wicklow,
Powerscourt, Bray, Co. Wicklow.

We, the undersigned Unionist inhabitants of Greystones and the sur­rounding district, on behalf of ourselves and other residents, beg to call your Lordship’s attention to the alarming, and indeed dangerous, state of political tension at present existing in this neighbourhood, which menaces the public peace end threatens the lives and security of loyal and law-abiding individuals.

Within a radius of a few miles, several hundred “National Volunteers” have enrolled and are actively drilling under competent instructors (ex-army sergeants), but without any influential local leaders who could keep them in hand, and whom they would implicitly obey under all circumstances of tense political agitation. The annexed schedule shows that there are at least 600 of them in this district. Arms and ammunition have been secretly landed along the coast in spite of the vigilance of the coastguards and H.M.’s warships, for very many of these Volunteers have been able to procure rifles, with the hostile intention, in some cases quite openly expressed, of attacking the Protestants and Unionists in this locality when an outbreak of civil war happens in Ulster, or should they be disappointed of Home Rule by the present Bill now before Parliament not coming into operation.  As a semi-drilled partially armed mob, they would, under political or sectarian excite­ment, and under the leadership of, perhaps, some fanatically inclined persons among, them, constitute a very near and grave danger to the public, peace and safety. We are therefore persuaded that, unless the authorities make adequate provision for our security, by arranging to send troops to insure our protection and the maintenance of peace, law and order before any possibility of a disturbance can take place, our lives and properties will be in danger. In this connection  we would beg to remind your Lordship that owing to the very strong sectarian and political feelings which have existed for some years in this neighbourhood, and which the present political disturbance has greatly accentuated, Greystones and district is one of the zones of danger in the Southern half of Ireland where an outbreak is likely first to occur.

As peaceful citizens of the United Kingdom, and loyal to the Throne, we consider that we are entitled to have military protection under such extreme­ly dangerous circumstances as those which have recently developed here, for, should any violence occur suddenly at a time when it might be impossible to sufficiently re-enforce the police quartered here owing to widespread strife all over the South and West of Ireland, the 6 or 8 constables of the R.I.C. now in Greystones and Delgany would be totally inadequate to contend with them. We believe, however, that the presence of two or three companies of regular troops quartered or encamped in the vicinity, say, at Newtown-Mount-Kennedy (between Bray and Ashford), would prevent any outbreak of hostilities, rioting, or looting which, if it happened, would almost certainly be attended with bloodshed. It would be too late to send troops after any such outbreak had occurred and property been destroyed or lives lost. We therefore urgently beg your Lordship, as H.M.’s Lieutenant for the Co. Wicklow, to immediately take the necessary steps to impel the civil and military authorities to assure our security by despatching, troops before any critical situation takes place, and to remain in the neighbourhood until political peace and quiet has been restored and sectarian ill-feeling, if any, has calmed down.

We have the honour to be,

Your Lordship’s most obedient servants 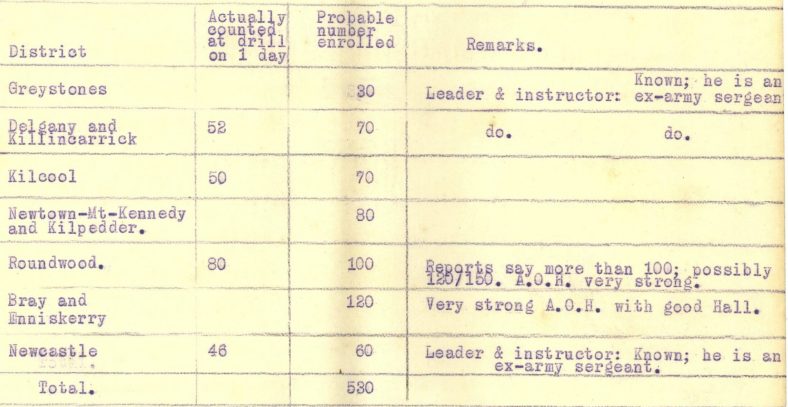 ‘Annexed schedule’ referred to in letter