You are here: HomenextTopicsnextWICKLOW 1914-1923nextWicklow 1916next1916 Wicklow People Reports Execution of Roger Casement

The famous 1916 leader Roger Casement was hanged for his part in the Rising in Pentonville Prison, London on the 3rd of August, 1916. Casement had an interesting connection with County Wicklow as his cousins owned Cronroe House, Ashford – now the Bel Air Hotel.  A frequent visitor as a child, his signature can still be seen on the wall of an upstairs room in the hotel.

This poignant report of his death was published in the Wicklow People newspaper on 5th August, 1916.

For more on the news stories of the year 1916 in the Wicklow newspapers see the weekly updates on our app 1916WicklowLife.  The app can be downloaded for free at the Playstore for android phones and tablets and at the Appstore for iphones and ipads.  Or see our website www.1916wicklowlife.ie. 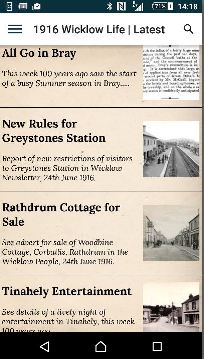