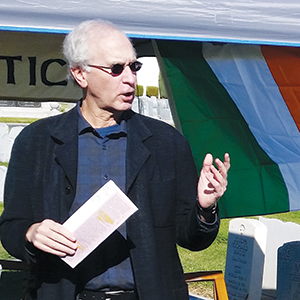 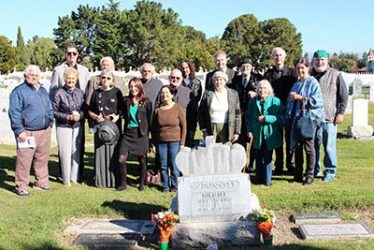 This article was published  on www.Metroactive.com on 30th November 2016 and was shared with Our Wicklow Heritage by Tony Becker of AmeriCeltic in response to our feature on Mick McDonnell.

About two dozen people recently gathered at Santa Clara Mission Cemetery to stage a memorial for Irish revolutionary and legend Michael “Mick” McDonnell. Michael McDonnell was born on the 8th of August 1889, in the townland of Rathduffmore, near Knockananna village, Co. Wicklow, the eldest child of Michael and Julia McDonnell, nee O’Toole.Nearly 100 years ago, McDonnell was the first leader of “The Squad,” a.k.a. “The Twelve Apostles,” the assassination unit employed by Michael Collins during the Irish War of Independence.

The Squad systematically killed a number of British spies, and their story is the subject of several books, including a new one by Irish historian Tim Pat Coogan. Before the Squad was formed, McDonnell took part in the Easter Rising of 1916 and then, with the Twelve Apostles, had a hand in the actions of Bloody Sunday. As the Irish Civil War began in 1922, McDonnell came to the U.S. and eventually settled in Los Gatos for the rest of his life. He died in 1950, followed by a massive funeral at St. Mary’s Church.

A few weeks ago, in commemoration of McDonnell’s service to the cause of Irish independence, AmeriCeltic invited a group of Bay Area Irish history buffs to his grave for a party. AmeriCeltic is a volunteer, nonprofit organization that preserves the culture and history of Americans of Celtic descent in Northern California. They researched California’s role in the Easter Rising to produce a short documentary, which led to more information about McDonnell’s participation in money trails leading from San Jose back to Ireland in support of Michael Collins’ activities. From there, the idea for a quaint gravesite dedication emerged.

The memorial was low-key and informal, but dramatic nonetheless. Irish flags hung suspended from a makeshift tent, as did several photocopies of old newspaper columns about McDonnell and the Squad’s activities. Music stands were set up and tea was flowing. Not a cloud lurked in the sky and all I could hear was the distant sound of a lawnmower tending to the grass. One could not have asked for a more peaceful afternoon.

“He was probably the most significant revolutionary who ever lived in California,” McEnery said. The former mayor’s connection to the whole mess is more than just historical, of course. It’s personal. After McDonnell arrived in the South Bay, he worked for McEnery’s father at the old Farmers Union building in downtown San Jose, which is now O’Flaherty’s Irish Pub, and McEnery still has childhood memories of seeing McDonnell around the business. He was a good friend of the family.

After the speeches concluded, the music commenced. Erin Thompson sang an evocative version of “The Foggy Dew.” Bagpiper Phil Lenihan came next, clad in a saffron kilt, the traditional dress for formal bagpipe occasions of national importance to Irish people. Together, everyone joined in singing a rousing version of “A Nation Once Again,” a song known around the world. This was perhaps the most moving part of the ceremony—local historians, musicians, a man of the cloth, a former mayor and others all paying sonic tribute to a forgotten revolutionary, backdropped by acres of headstones sprawling in every direction around us. And that distant lawnmower still plugged away.

Although no one seems to know exactly why McDonnell decided to settle in the San Jose area, as opposed to anywhere else, Tony Becker of AmeriCeltic thinks McDonnell was dispatched here to help continue an operation of sorts. At the time of the Irish Civil War, plenty of organizations existed in Northern California to raise money for the cause of Irish independence, namely the Ancient Order of Hibernians and the Friends of Irish Freedom. McDonnell became mixed up with those organizations after he settled in Los Gatos, helping to support the efforts of Michael Collins and his band of rebels, even after Collins died.

“[We] believe that is the likely reason Collins sent him here—to keep the cash flowing to the Finance Ministry of the Irish Republic headed by Collins, and not to Eamon De Valera’s faction,” Becker said.