You are here: HomenextTopicsnextWICKLOW PUBLICATIONSnextBOOK: A Life in the Trees

BOOK: A Life in the Trees 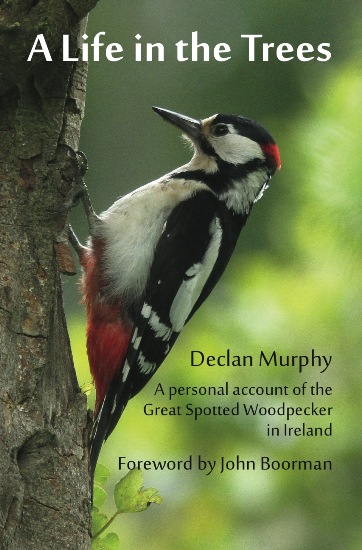 A Life in the Trees, a personal account of the Great Spotted Woodpecker in Ireland was published on 28th September 2017. Written by Wicklow author Declan Murphy, and with a Foreword by film director John Boorman, it has enjoyed unprecedented success.
The book was reviewed by the Irish Times with Michael Viney describing the author “as engaging and passionate a naturalist as Ireland has produced” as well as being featured in a woodland based interview on RTE’s Mooney Goes Wild Show.

The book is a personal account of the Great Spotted Woodpecker in County Wicklow.  Written as an enthralling narrative it follows the true day to day to life of a family of woodpeckers in the woodlands of Wicklow, set against the rich natural wonders of the Wicklow Mountains. Pine Martens, Red Squirrels and other native species weave their own tapestry of stories between the lives of the woodpeckers.

Great Spotted Woodpeckers first arrived in Ireland in 2007 and since then have gradually built up a small population in the woodlands of Wicklow. They are a shy species but full of character as we discover in this unique addition to Irelands growing artistic productions. As reviewed by BirdWatch Ireland “we are visited by hope, joy, pathos, tragedy, surprise and hope again as the story of the woodpeckers and their chicks gradually unfolds”

John Boorman, director of award winning films such as Excalibur, Deliverance and Point Blank, has produced a unique and quirky foreword in the form of a short story from the woodpeckers perspective of the unfolding events. While speaking at the launch of the book he described as “visually engaging combined with an enthralling narrative.”

A Life in the Trees is hardback and costs €20.00 It is available from The Village Bookshop in Greystones, Bridge Street Books in Wicklow, Magpie Books in Enniskerry, The Garden Shop in Mount Usher Gardens and The Blessington Bookstore. It is also available online from BirdWatch Ireland at www.birdwatchireland.ie