You are here: HomenextPlacesnextBALTINGLASSnextExiles and Emigrants: From Ireland to Tasmania

Exiles and Emigrants: From Ireland to Tasmania 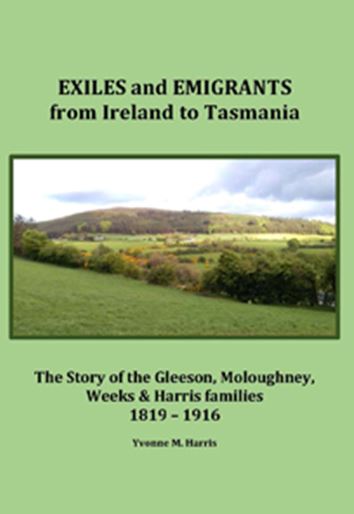 The family story of the Gleeson, Moloughney, Weeks and Harris families and their journey from Ireland to Tasmania has been meticulously researched and written by descendant, Yvonne Harris.  It includes the story of James and Mary Weeks from County Wicklow, Ireland. James, a father of nine children, was convicted of stealing two sheep at Baltinglass in 1847 and transported to Van Diemen’s Land in 1849.

The book takes us into the turbulent political situation in Ireland in the 1840’s and the disastrous potato famine which occurred in the last years of the decade. Thousands of Irish men and women were transported across the seas to Britain’s penal colony in Van Diemen’s Land and thousands more emigrated. Exiles and Emigrants is an account of the experiences of some of these men and women, bond and free, in the new land.

The author describes the hardships and tragedies they endured during the early years in the penal colony. Following the cessation of transportation to the island in 1853, they were able, with courage and determination, to establish successful lives as Tasmania emerged into a free society

Published in 2016 with 537 pages, a family chart and family photographs. Bibliography