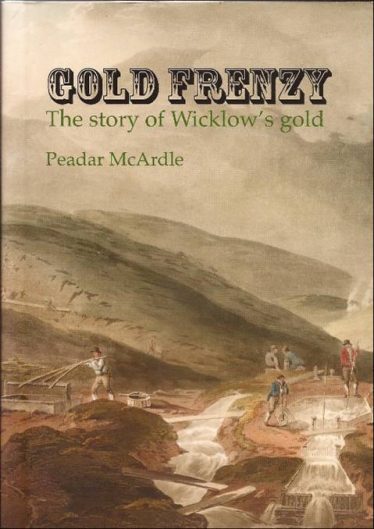 Wicklow really did have a gold rush back in 1795.  It may not have upset the international gold market but it did have a significant impact in Britain and Ireland.  With a huge public debt, the British government briefly foresaw a Wicklow solution to its economic woes.  Meanwhile many local residents managed to enrich themselves pleasantly!  Government-controlled workings petered out in 1804 without the bedrock source of the gold being discovered.

Subsequently Goldmine River was considered unsuitable for State investment due to gold’s speculative nature, but Charles Stewart Parnell had no scruples in including it among his favoured mining projects.  The First Dáil, in examining prospects at GoldmineRiver, preferred the naive enthusiasm of an overseas geologist to the calculated caution of a resident expert.  The award of State mining facilities in the 1930s led to charges of corruption and lease trafficking, allegations which were considered efficiently by an Oireachtas Committee.  The district was explored during the 1980s gold boom but neither alluvial nor bedrock sources were found to be commercial.  Nevertheless several resource companies are actively exploring once more in the surrounding region.

Peadar McArdle is a professional geologist who recently retired as Director of the Geological Survey of Ireland (GSI).  His account of the Wicklow gold rush is published as Gold Frenzy.*  Peadar’s earlier book, Rock around Ireland, is a guide to Ireland’s geology.