Kilmacurragh: Sourced In The Wild 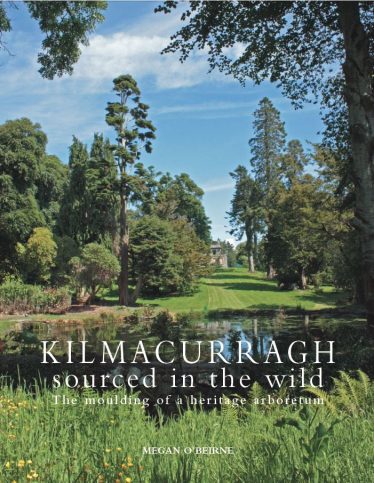 You Never Walk Alone Among Trees, especially not in Kilmacurragh Arboretum and Botanic gardens, Kilbride, Co. Wicklow. Besides the powerful presences of champion trees, every dip and incline in the garden is suffused with a sense of history, from medieval times through those of the Anglo-Irish Acton dynasty to the present time. In this ‘garden like romance itself’, every projecting beam, twisted branch, angled trunk and grassed-over pathway speaks of a complex and dramatic past.

During their continuous tenure, successive generations of Actons, passionate about trees, planted a wide variety of both native and exotic trees of particular heritage and conservation importance today. The prized collections of conifers and the famous Himalayan tree rhododendrons sourced in the wild by sir Joseph Hooker represent the nucleus of the arboretum.

The political and social context of the evolution of this arboretum was marked since the seventeenth century by a continual national struggle between opposites: wealth and misery, possession and dispossession,deforestation and silviculture, Protestant and Catholic, peace and aggression, power and impotence, hierarchical administration and democratic government.

In 1996, after some decades of neglect, the management of Kilmacurragh Arboretum and gardens was transferred to the national Botanic gardens (NBG), Dublin, of which it is now a ‘sister garden’. Plant acquisitions made during recent worldwide expeditions organised by the NBG have made a new style of gardening possible in Kilmacurragh, integrating the charm of Thomas Acton’s ‘wild garden’ with a modern botanic focus. The continued flourishing of this unique arboretum exemplifies the best aspects of the heritage of a vanished age.

Writer and visual artist Megan O’Beirne first visited Kilmacurragh Arboretum in 2009. she was so enchanted that she resolved to fill a vacuum, to make an art book comprising text and photographs which would capture the spirit of this precious and little-known national treasure and help to publicise it. This book, part-funded by Artlinks, is the fruit of her research and countless photographic sessions. O’Beirne has written for Sunday Miscellany at Radio Éireann and is a regular contributor of articles and photographs to Crann, Ireland’s voluntary tree organisation.

As well as writing, O’Beirne’s practice includes painting, photography and print. She has exhibited widely and her work is represented in national (OPW) and county (Wexford) collections. She has been a recipient ofArts Council bursaries, and artist residencies include Banff, Canada, and Reykjavik, Iceland.