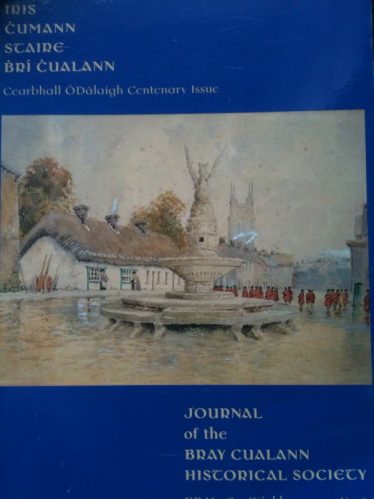 zoom
The No. 6 journal was officially launched by Liam Ó hAlmhain, nephew of Cearbhall Ó Dálaigh on 8th Feb. 2011, while. President Mary McAleese was guest of honour at the launch event in Bray Civic Offices

County Wicklow has a well developed network of historical societies, each through their activities building up a treasure trove of knowledge about their local people and places.

Among the oldest societies active in the county is The Bray Cualann Historical Society, formed in 1976 with the aims of promoting history in Bray and North Wicklow. The Society holds monthly lectures and outings to places of interest. Since the first journal appeared in 1985, the society has published in its six journals more than 100 different articles tracing the history of Bray and surrounding areas.

The first journal of the Society was published in 1985, with other journals in 1986, 1990, 2001 (the 25th Anniversary of the society), and 2004 (150th Anniversary of the railway coming to Bray). The sixth journal, produced in 2011 is a special issue that marks the centenary of the birth of Cearbhall Ó Dálaigh, the 5th President of Ireland, who was born at 85 Main Street, Bray, on 12th February 1911 and who resigned controversially in 1976. This issue of the journal is guest-edited by Prof. Colum Kenny of Dublin City University, and a resident of Bray. Included in the 165 page issue are:

Cearbhall Ó Dálaigh 1911-1978:    Fifteen articles and poems about the late Cearbhall Ó Dálaigh, a journalist, lawyer and politician whose principles drove him to step down as President of Ireland. In the continuing absence of a biography in English about Ó Dálaigh, this section has extra significance.

Bray Stories:    Articles about The Blind Fiddler of Bray Head and other persons, places, livelihoods and events that have shaped the development of Bray since 1788.

Bray Public Library:    The history of Bray Public Library 1911-2011, a Carnegie foundation that continues to serve both young and old in our digital age. Cearbhall Ó Dálaigh’s father helped to pick its first books.

Remarkable Women :    The story of some women, all somehow associated with Bray. Elise Sandes set up 32 homes for soldiers. Pauline Adams became a champion of women’s rights in the USA. Lilian Lucy Davidson, an artist, attended the Olympics in 1928. Sr. Cyril Mooney is a highly respected educationalist in India, and world-boxing champion Katie Taylor has a history of boxing in Bray behind her.