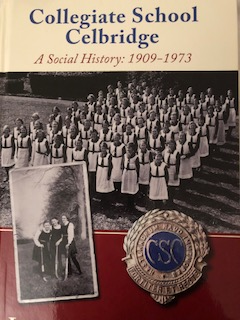 Lorna Sixsmith’s recently published account of boarding school life, Collegiate School, Celbridge: a social history, 1909-1973, tells the story, largely from the point of view of former pupils, of one particular establishment. Founded in the eighteenth century, Collegiate School, Celbridge was initially intended to train girls in domestic service, but by the early twentieth century had adopted a thoroughly academic curriculum, with many graduates going on to take up teaching as a profession. Due to declining numbers, the school was amalgamated with Kilkenny College in 1973.

While pupils came to the school from all over Ireland, the list of attendees for the period in question reveals a high proportion of girls with addresses in counties adjacent to Kildare, including our own. So we find well-known Wicklow names such as Nuzum, Hadden, Rickerby, Hobson, Hanbridge and Kidd, often with several members of the same family attending around the same time, or indeed in successive generations.

This lively and comprehensive account, which includes photographs dating back to the 1920s, will be of interest not only to those women from Wicklow who attended the school and their families, but also to anybody interested in female education as it developed throughout the twentieth century. Copies can be obtained from Kilkenny College, contact peterdukelow@kilkennycollege.com . Cheques for 25 euro (15 euro for the book plus 10 euro p&p) should be made payable to Kilkenny College.