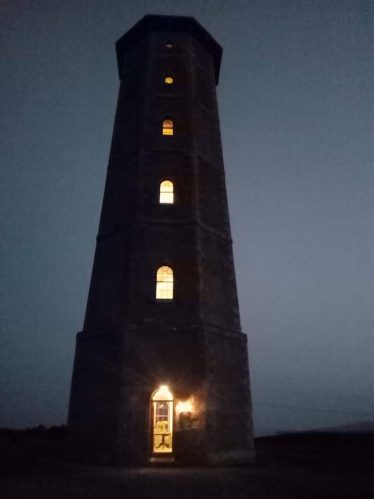 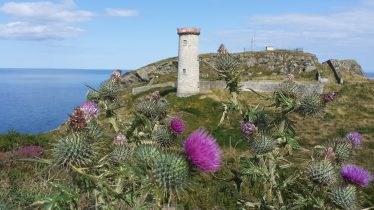 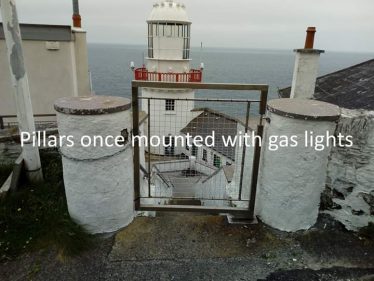 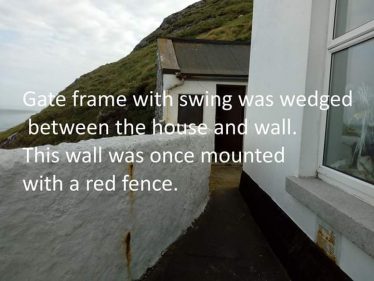 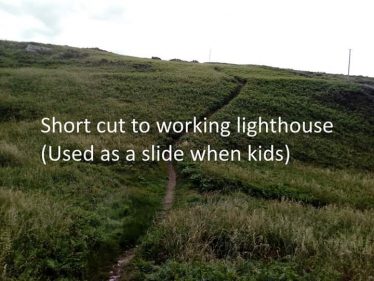 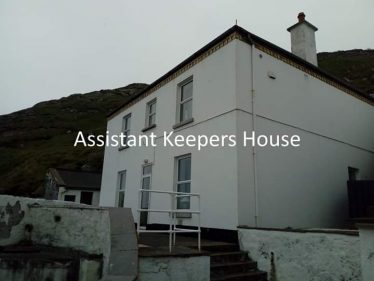 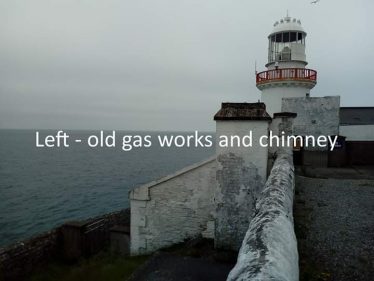 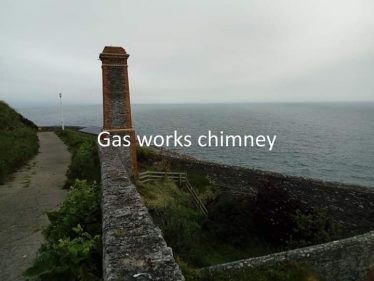 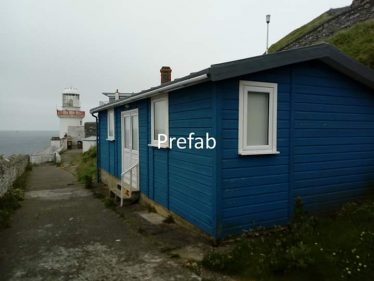 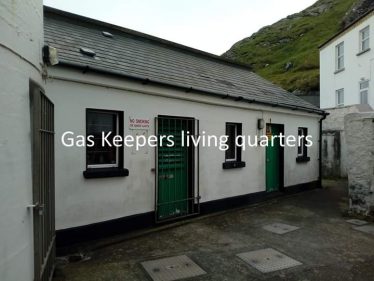 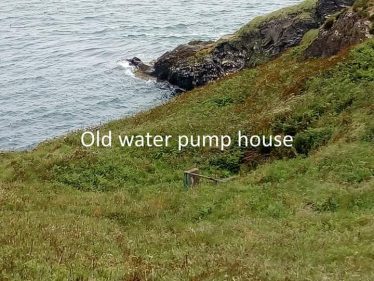 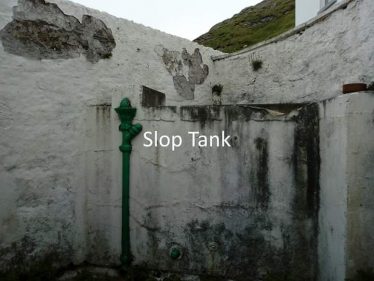 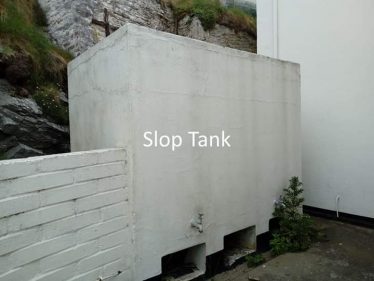 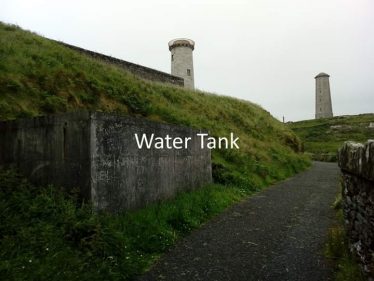 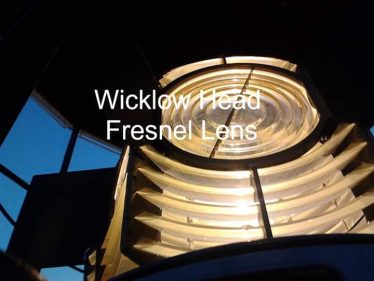 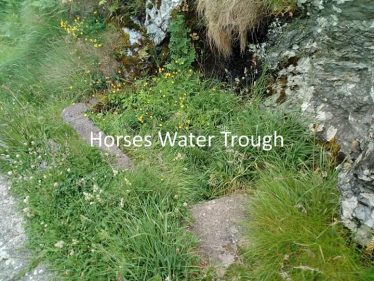 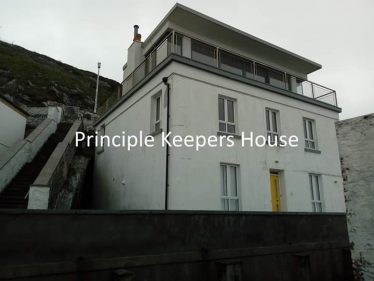 I remember tea chests in 1969. Made from very thin wood, riveted with metal edges, they were often used for the packing and moving of household items. They had the words EAST INDIA TEA COMPANY stamped on the casing in large black letters. Sometimes, grains of tea could be found lodged in the corners; including strips of metal foil that lined the inside. There was a wonderful aroma of tea infused in the chest. It’s the first smell I can remember when we moved into the assistant keepers’ house. The Assistant Keeper (AK) was Brendan Conway, my dad. Principle Keeper (PK) was Jim Cahill. Temporary keeper was William Conway, my grandfather. The lighthouse was ‘Non-relieving,’ meaning, the AK and PK lived there full-time. William lived in a prefab located next to a grassy embankment, next to the old gas works. We lived in the house on the right, as one looks out to sea. Jim Cahill lived in the house on the left, facing the tower and looking into a courtyard.

Gas usage at the station commenced on 4 January 1868. The red-bricked chimney and stone wall enclosure, which sits between the prefab and the PKs house, is all that remains of it. There were two gas works. Gas powered the main light, but also provided general lighting about the station. There are four, large, round pillars flanking the top and bottom steps between the two houses. These pillars were once mounted with gas lights.

The second gas works was housed in the building below the courtyard entrance; there is a window at ground level looking into it. This window was originally a hatch used for emptying cannel coal into a bunker used in the production of gas. There is a chimney, whitewashed, attached to this building. This chimney was later used to support a rig for semaphore signalling. If you run your eye along the top of the stump, you can still see some of the worn down metal, once part of a rig that supported the semaphore flags.

The coal was brought to the lighthouse from Wicklow town by horse and cart. One of the old drinking troughs – used by the horses – still exists. It is located about 10 meters back along the station road – just before you come into view of the two houses.

Wicklow Head had its own gas keeper. He lived separate from the light keepers. His accommodation was located in the two small outhouses next to the tower. One was his kitchen and living room, the other his bedroom. Today, one is used as a mess room for visiting lighthouse personal, the other is a battery room. The batteries run the standby lights on the balcony in the event of a power failure.

Back then our drinking water came from a well. The well is located down in the valley, under the brow of the station road. You can still see the remains of the old pump house. The water was pumped into two, large concrete water tanks next to the station road. These tanks fed the water to the keepers’ houses. There are three similar tanks at the station, called slop tanks. One is located at the back of each house, the other next to the mess room. These tanks contained runoff rainwater which was used for washing down the station.

I remember other smells at the station: paraffin, oil, fresh paint, Brasso metal polish cleaner, wood polish, and musty air inside the tower. The floors in our house were linoleum. My mum kept them polished as she loved the smell of fresh polish oozing from under our feet.

I remember colours: whitewashed walls that would blister and crack in summertime. Buildings were painted white. Fences, gates, outdoor faucets, water tank lids, and railings were painted red; including cattle traps and gates on the station road. Entrance doors to houses and outhouses were painted green. The lantern room was full of polished brass.

I remember my dad using a hand-held blowtorch to heat up an old type of filament called a ‘retort.’ He would heat the ‘retort’ until it was a dull orange colour, then open a valve which released vaporized paraffin under pressure. He then ignited the paraffin vapour with the blowtorch. I remember the hiss of the paraffin jets inside the lens. I remember the clank of metal on metal as brass cogs and wheels and gears were set in motion by my father winding the optic drive: a clockwork mechanism which rotated the lens. About every twenty-five to thirty minutes it had to be wound to keep the lens rotating through the night. In the event the keeper forgot to wind the drive, or there was a problem with it, there were bells in keepers’ houses to raise the alarm.

I remember going to bed at night with smudges of Brasso on my fingertips. I was a brat for running my hands along the brass work; especially the brass railings leading up on to the catwalk in the lantern room. The keepers spent hours, polishing and buffering them each day. “Get your hands off the brass!” I can still hear my dad shout at me.

I remember one day the Principle keeper, Jim Cahill, offered me an ice caramel sweet presented in a brown plastic tray. It’s my earliest memory of eating a sweet. I was aged four.

I remember one day a doctor came to see my dad. He had been attacked by two German Shepherds at Kings House (now Dunbur Lodge) – where the station road meets the coast road. My dad had stopped there to pick up our milk, and the two dogs had come bounding over the garden wall. We didn’t have a car back then, but Irish lights provided us with a taxi to get in and out of Wicklow town. The taxi also took us to church every Sunday.

I remember going to school from the lighthouse. My mum would walk me the 2 kilometres to Kings House. There, I would get a lift in to Wicklow town with a woman by the name of Miss Gavin. There were lots of cows in the fields back then. Sometimes the cows escaped and blocked the cattle traps and gates on the station road. Then my mum would have to take me back to the lighthouse and ask my dad to come and move the cows. I remember one day, he was up a ladder, with a Rothmans’ cigarette in his mouth, and he wasn’t too happy when my mum told him the cows were blocking our way and he’d have to come and move them. He was twice as unhappy when we returned to find the cows had gone!

I remember the post man, Larry. He was a tall, skinny man with curly brown hair. He wore glasses. My mum said he wouldn’t get out of his post van to open the red gates up on Long Hill. Back then these gates were closed, but not locked. Larry would part the gates with the bumper of the van and drive on down to the station. He’d come into our kitchen, pull up a wooden chair, turn it back to front, wrap his lanky legs around it, and then lean on the back of it with his arms folded. He’d sit there all day: talking, drinking tea, smoking; and when he ran out of cigarettes, he drove back to Wicklow and bought some more! My mum said she doesn’t know how the post ever got delivered. But they were great times!

Our food waste was thrown over a wall into the sea outside the front door. So, there was an ever presence of seagulls waiting for a free meal. This wall was once mounted with a red fence. And between the wall and our house was the frame of an old gate. My father hung a swing from the frame for my brother Garry and me to play on. You can still see the remains of some metal in the wall where the frame was once anchored. We also played on our tricycles in the courtyard in front of the PKs’ house. And we played sliding down a grassy embankment up on Long Hill, which is now a well-worn path (short cut) down to the working lighthouse.

We left Wicklow Head in the early 1970s when my dad was posted to Mizen Head, Co. Cork. Wicklow lighthouse then changed to ‘Relieving’ in 1974, meaning, three keepers – one PK and two AKs – worked a month on, and a month off with their opposites. They worked watches, 4 hours on, 8 hours off. These watches were 10-2, 2-6, 6-10, and ran 24 hours a day, 7 days a week. The watch changed on Sunday, when the 6-10 keeper also covered the 10-2, thus, the watches rolled over. My father returned to Wicklow Head in the early 1990s and was the last keeper to leave when the station was automated and closed in 1994. The next day he was employed as the attendant. He remained in that position until his retirement in July 2017.

When I was aged twenty I joined Irish Lights as a temporary lighthouse keeper. I had hoped to follow my dad and my grandfather into the service. But automation put an end to that dream. I worked as a temporary for about two years and I got to see some of the old ways before they disappeared. I have written about my time as a temporary keeper on Tuskar rock, Rockabill, Bull Rock, Skellig Michael, Fastnet Rock and Baily; including my childhood at Wicklow Head and Mizen Head, in The Boy Who Built Lighthouses – memoirs of a travelling lighthouse keeper.