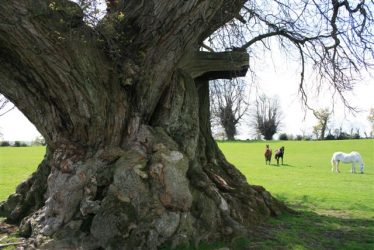 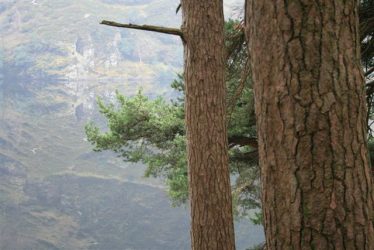 If trees could talk more would be known about the influences that have shaped the landscape and the rich arboreal heritage we now enjoy in this great county, the Garden of Ireland. But they don’t; and so in trying to unravel the past, and how it evolved, we rely largely for clues from archaeology, pollen and tephra analysis, ecological surveys, place names, documentary records and here say – often influenced by political bias.

There is uncertainty over how much woodland was present in Wicklow in the seventeenth century and in earlier times. Indications are that it may not have been as extensive as we were led to believe. New landowners made their impact on the landscape from the seventeenth century on through some tree felling and various improvement initiatives, including tree planting and the building of fine country manors. However, the full effects these intrusions, land dispossessions, outbreaks of violence in 1580 (Battle of Glenmalure) 1641, and 1798, the Great Famine and other influences, on into the twentieth century, including two World Wars, on the level of woodland, are poorly understood.

Half the population in the county still lived in mud cabins in the early 1840s before it collapsed during the famine. Soon after this catastrophe, 6,000 men, women and children were sent to Canada by ship by the largest woodland owner in the county whose Irish estate, by far the largest in the county with an area of some 36,000 ha, was centered at Coolattin near the village of Shillelagh.

Interestingly, most of the woods present in the early eighteenth century, and many of the trees planted during that period, and particularly during the nineteenth century, live on. These have survived the devastating storms of 1839, 1903 and more recently Hurricane Charlie in 1986. Somehow they have also coped with threats from invasive species, notably deer, and now the grey squirrel. Just like every other industry, fashions and markets change in forestry and are very different today relative to the earlier times. The twenty first century signals new horizons and challenges dominated by environment issues with climate change and green gas sinks, recreation, native species and the management of alien plant and animal species high on the agenda.

The next half century will see the disappearance of many ancient trees in the county and leave a gap before a new generation of broadleaves and other species make their presence felt. Although these ageing trees are in decline, and add greatly to the landscape, large numbers of specimens – including many living and some dead – carry stories that endure and continue to form part of our folklore. The John Wesley’s Spanish chestnut at Rosanna, the lead-shot embedded beech trunk at Glendalough estate dating back to 1798, the Sheep Stealers tree at Ballyraheen and a number of hangman trees dating back to troubled times are but a few examples that generate sobriety and mixed emotions. Countered surely by the presence today of a vibrant, successful and sustainable forest industry and many fascinating tree specimens and woodlands.

Wicklow’s trees and woodlands are there to be seen, enjoyed and researched by those who have an interest at little if no cost. This is greatly facilitated by Coillte’s proactive outdoor recreational policy (www.coillte.ie/aboutcoillte/recreation), together with free access to many of the ancient woodland sites in the county managed by the National Parks and Wildlife Service enabling the public to see at first hand many of the jewels in our arboreal world. Access to the amazing ancient gardens now run by the National Botanic Gardens at Kilmacurragh is also free. In addition the public may view wonderful tree collections at Powerscourt, Kilruddery, Charleville, Mount Usher and a plethora of other places, if they so wish.