You are here: HomenextPlacesnextKILCOOLEnextKilcoole Little Terns 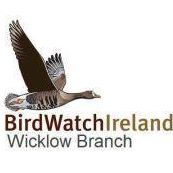 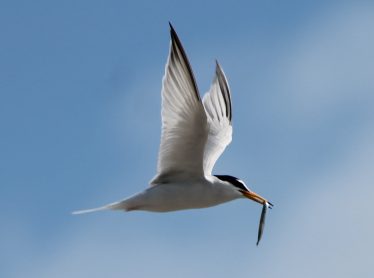 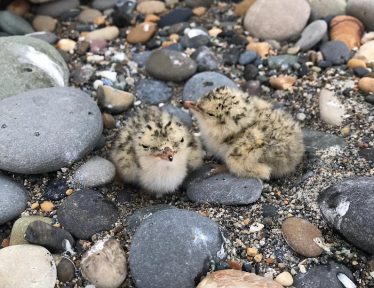 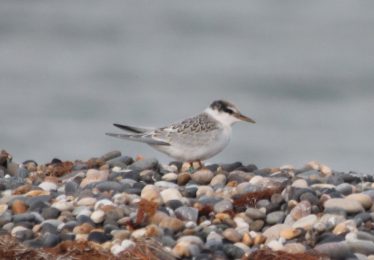 Rare summer visitor from April to late August to shingle or sandy beaches, mainly on the east and west coasts

The smallest of the terns breeding in Ireland. Small slender seabird with narrow, pointed wings, long forked tail and long, pointed bill. Grey above and white below, dark cap to head, white forehead in all plumages. Flight is light and buoyant, hovers rapidly while foraging over the sea before repeatedly diving in. Has a dark leading edge to the primaries of its long narrow wings. Adult summer bird has long yellow bill with black tip. In winter plumage the white of the forehead extends up over the fore crown, the legs darken and the bill is all black. Juvenile plumage is distinct from the adult with dark bill, barred mantle and dark upper forewing.

Nest colonially on the ground on shingle beaches, making them very vulnerable to poor weather and ground predators. Only a few colonies are found in Ireland, with the majority breeding in Counties Louth, Wicklow and Wexford.

Little Terns have nested on the shingle beach at Kilcoole for over 100 years. The Kilcoole Little Tern protection Scheme has been ongoing for the last 34 years. The nesting terns usually occupy a small strip of shingle beach at “the Breaches”, midway between Kilcoole and Newcastle railway stations.  Special  measures need to be implemented to prevent disturbance and trampling on the very well camouflaged tern nests, including erecting mesh fencing around the colony to keep out people and dogs, as well as electric fencing to keep out foxes, and other mammals, at night.

Last year, 2018, was a good year for the terns at Kilcoole, with a breeding population of 142 pairs. By comparison, the colony held 141 nesting pairs in 2017 and 143 in 2016, so it’s holding up well.  However, last year’s breeding season was disrupted by Storm Hector in June, which split it in half. We ended up with two ‘waves’ of young tern fledglings, one in mid-July, the other in early August.

Female Little Terns lay 1-3 eggs in a slight depression (‘scrape’), which they incubate for 3 weeks.Rapid growth enables the young to take their first flights at between 2 and 3 weeks old, although they remain dependent on their parents for food.  A variety of predators do manage to take eggs and young: Red Foxes, Hooded Crows, Hedgehogs and Kestrels are perhaps the top three trouble-makers but each pair usually rears between 1 and 2 young in most years. Occasionally the colony may totally fail and this is most often due to spring tides and easterly winds.

In 2014 BirdWatch Ireland started adding a plastic colour ring (see photo) to the chicks’ legs, in addition to the much smaller national metal ring. Colour rings can be read using a telescope or binoculars, so recapture is not required to learn a bird’s history. We hoped this would yield information on the migratory routes and final winter destinations of our Little Terns. Five years into the colour-ringing programme we have learned a lot about where they go as they leave the Irish Sea in August/September. Some are seen in Wales and south-west England before they head to the coast of Brittany in France.The next cluster of re-sightings comes from north-west Spain and Portugal…but there the trail goes cold.

Earlier this Spring, howev er, Dutch ornithologists working for the Royal Netherlands Institute for Sea Research on the Banc d’Arguin, in Mauritania, WestAfrica, contacted us to say they had seen Little Tern ‘IOH’ while ringing Red Knots and Bar-tailed Godwits at this internationally important wintering site for Palaearctic waders. We ringed IOH as a chick at Kilcoole on June 17th, 2017, and re-trapped it there two days later, when we added the colour ring. Some six weeks later it was sighted on a beach at Gronant, North Wales. IOH was not seen at either Kilcoole or Gronant during the summer of 2018, but then, on December 11th, 2018, ornithologist Bob Loos found it at the Banc d’Arguin in Mauritania.

It would be a joy to find it breeding at Kilcoole this summer : ask our tern wardens if it has turned up!

This year the first Little Tern egg was discovered on the 17th May after which the total population quickly grew to 136 pairs. However due to a combination of egg predation – especially by Hedgehogs – and bad weather (27 nests too close to the high tide line were lost) the colony suffered heavy losses. However, many birds were able to relay to compensate for those losses so that the BirdWatch Ireland wardens were able to ring more than 300 chicks this year. You can view updates online at Littleternconservation.blogspot.com