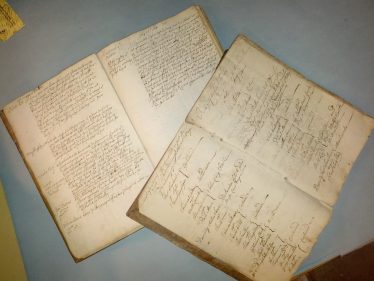 17th & 18th century minute books of the Borough of Wicklow

The Wicklow County Archives are a unique collection of Wicklow records relating to the administration of the county and the people’s interaction with this administration.  They offer a rich research resource not only for the family historian and the local historian, but also for academic and other researchers of wide and varying interests who wish to learn about the shape and development of communities and the authorities who served them.

Among the jewels of the collection, which includes workhouse registers and grand jury records, are the 17th and 18th century Wicklow Borough records. These early minute books offer a snapshot of life in Wicklow from the mid-1600’s.  The county archives also holds the records of the Grand Jury, which was the precursor of the county council, as well as the Boards of Guardians of the poor law unions, boards of health, rural and district, town and county councils.

The following are a selection of some of the records held by the Wicklow County Archives….. 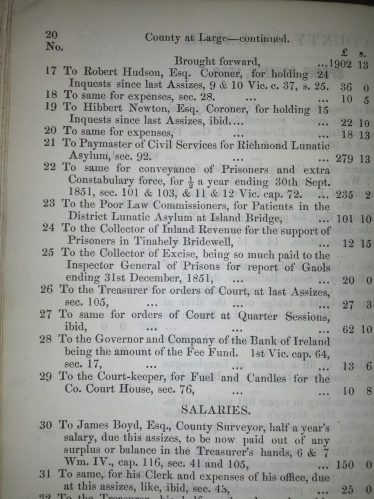 The Grand Juries were set up across the country from approximately the 17th century and were an early form of local government. The members were appointed by the County Sheriff, usually from the ranks of major local land owners. The Jury was initially concerned with the administration of justice, but later took on responsibility for building and maintaining roads, bridges, infirmaries, asylums, courthouses and gaols. The Grand Jury was empowered to levy a local County Cess (tax or rate) and met at Spring and Summer Assizes where presentments (works) were passed. The Grand Jury was superseded by the county council system in 1898 but retained its judicial function until it was abolished in 1924.

The records of the Grand Juries take the form of Abstracts of Presentments. These were proposals for works put before presentment sessions at the Spring and Summer assizes and the resulting contracts and payments. They hold a wealth of information, including names, salaries and work of individuals in the employment of the grand jury. Examples of entries include works on roads and bridges, the accompaniment of prisoners, the payment of constabulary and upkeep of dispensaries, fever hospitals and the county gaol. Names and salaries of officials such as the county surveyor or the surgeon at the county infirmary are also shown. Another valuable aspect of these records are the references to landmarks, such as bridges, turnpikes, residences and roads. As well as this detailed information, the general policies, approaches and responsibilities of the Grand Jury in 19th century Ireland are also illuminated.  (Please see news on the Grand Jury digitisation project at the end of this article).

Poor Law Unions were established under the Poor Law (Ireland) Act, 1838 as a response to widespread poverty and the Board of Guardians was the governing body of the workhouse and poor law union.  The functions of the Boards of Guardians were gradually extended to include public health and rural housing and sanitation until their abolition in 1923.  While the Local Government (Ireland) Act 1898 saw most of its public health functions taken over by the newly-created Wicklow County Council, the board continued to administer the workhouse and its hospital, and to supervise some forms of outdoor relief.

Minute books are the largest series of poor law archives, reflecting not only the functions of the Board, but also resolutions on internal and poor law matters and on wider political or social issues.  The boards consisted of elected candidates as well ex-officio members, appointed usually from amongst local magistrates and landowners, creating an interesting mix of backgrounds and attitudes of the day. 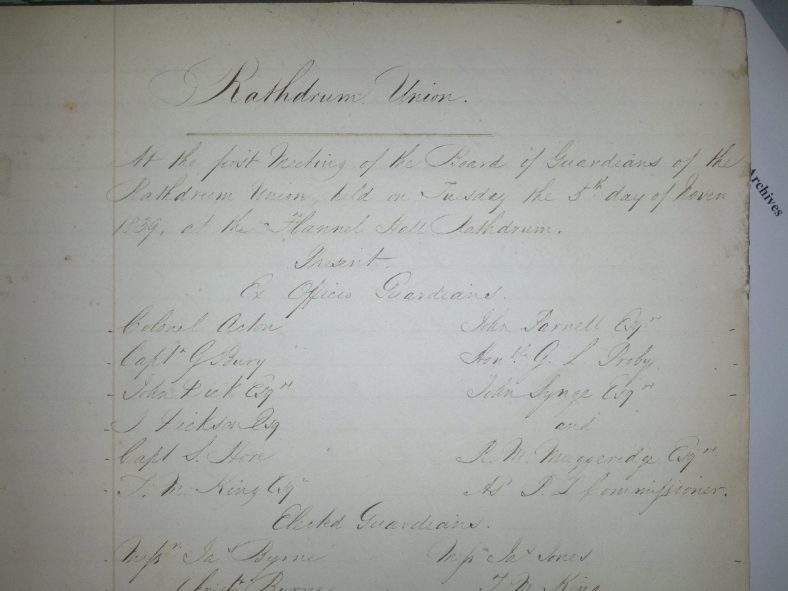 Extract from the minute book of the Rathdrum Board of Guardians, showing their first meeting held at the Flannel Hall, Rathdrum. The board included members of the famous County Wicklow families of Parnell and Synge 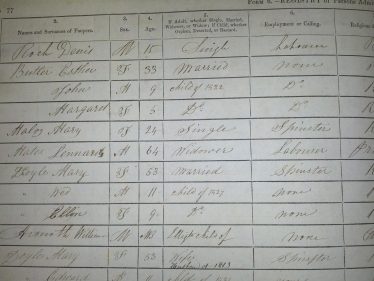 Detail from the Admissions and Discharge register of the Rathdrum Workhouse, 1849

The County Archives collection of admission and discharge registers of the Rathdrum and Shillelagh workhouses date from famine times. They tell the story of the poor and destitute of the county in stark reality.  Some of the headings under which information was recorded include, “Number”, “Name of Pauper”, “Single/Married/ Widow/er”, “Child of”, “Trade/Calling”, “Disabled and Nature of disability”, “Observations on condition upon admission”, “Date admitted or when born in the workhouse” and “Date of death or discharge”. These are perhaps our most poignant records, illustrating the suffering of the poor in the lists of names of those admitted to this institution, not only in famine times but throughout the 19th and early 20th century.

Wicklow County Council came into being in 1899 as a result of the Local Government Act, 1898. Prior to this, local government functions had been carried out by the Grand Juries and the Boards of Guardians.  The county councils were an important instrument in establishing democratic local government in Ireland for the first time, and in trying to improve social conditions for the people of the country.

A broad range of information is available in the minutes of Wicklow County Council, as well as the various town and rural councils, relating not only to its work but also to events of local and national significance.  They are a wonderful rich archival source illustrating the various aspects of local administration and democratic government during one of the most significant periods in Irish history.  Resolutions of the councils give an insight into national and international events and contain an important record of local views of these events. 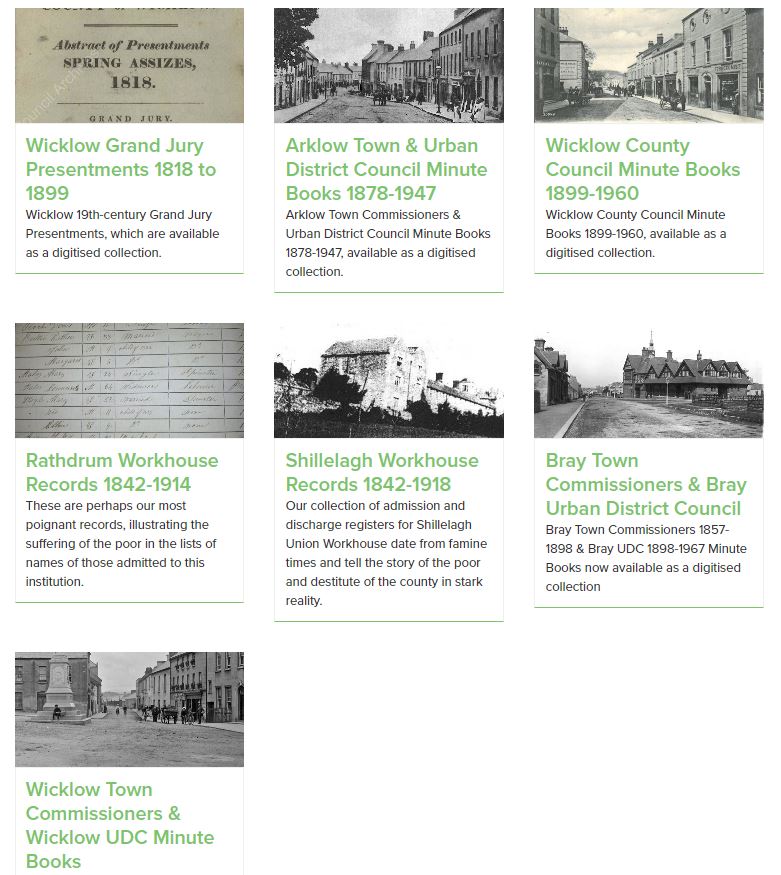