Church and graveyard memorials in the area covered by this short note are both varied and informative, for not only do we find information of a genealogical nature, but, also, that of the deceased’s social standing and occupation or trade. Memorials in Church of Ireland churches are usually more informative than those in R.C. churches, this is especially notice­able in the case of landed gentry and the professions.

Verses and biblical quotations abound, whilst humour is absent; an occasional ‘oddity’ yes. From south and west Wicklow I choose two examples: In the old graveyard of Preban, on the Aughrim/Annacurragh/ Tinahely road a memorial records that Catherine Neil died on 30th February 1878, aged 21. Dunlavin churchyard, attached to the C. of I. Church has a very odd mistake: it records that Catherine Smyth died in 1868, aged 14, yet the same memorial states that her father died in 1846 and her mother in 18511 No doubt, an inspection of the Burial Register could clarify the matter.

The very large number of memorials with carvings of the Passion Symbols are worthy of a special study. Excellent examples are to be seen in Rathnew Old, Trinity and, above all, Glendalough. For a full discussion on this type of memorial decoration, see the various papers published by Ada Longfield (Mrs H. G. Leask) in the J. Royal Societies of Ireland and other publications.

Amongst the JUDD memorials in this isolated and neglected graveyard is a very large ½ round slab closing a box tomb. A local man told me many years ago that his father was paid 10s. (50p) to bring this weighty slab from the public road up the steep track to the enclosure – two days pay for four hours work! The Cuniam/Cunneam/Cunniam family is well repre­sented here. Price, Place-names of the Barony of Arklow (Proc. R.I.A. vol. XLVI, C.5, p.249) records a Ballicoinam (1614) under Cunniamstown.

The Quaker burial ground at Ballymurrin has been in use for over 200 years, yet, during that time, only four memorials have been erected. These are to the PIM family of Wicklow and cover the period 1870-1899. According to the Burial Register in the Society of Friends Reference Library, the first interment was that of Bridge BOARDMAN who died, aged 2, in 1673. The first PIM burial recorded is that of Tobias, he died in 1778, aged 23. Pigots Directory (1824) lists a Joseph Pim ‘linen & woollen draper’.

When I first visited this enclosure in 1973 or 1974 it was in a dreadful mess and almost impossible to gain access. On a return visit, in 1985, I hardly recognised the place such was the change. A thorough and competent work-party had cleared all shrubbery, briars and unsightly household rubbish and had exposed the four Pim memorials, the exis­tence of which l had been unaware.

There are many variations in the spelling of this burial ground. That used by the Society of Friends, Ballymorane, is not included by Price in his Place-names (op.cit.). To add to the confusion, Lewis, Topographical Dictionary of Ireland (1837) says Ballymurton. 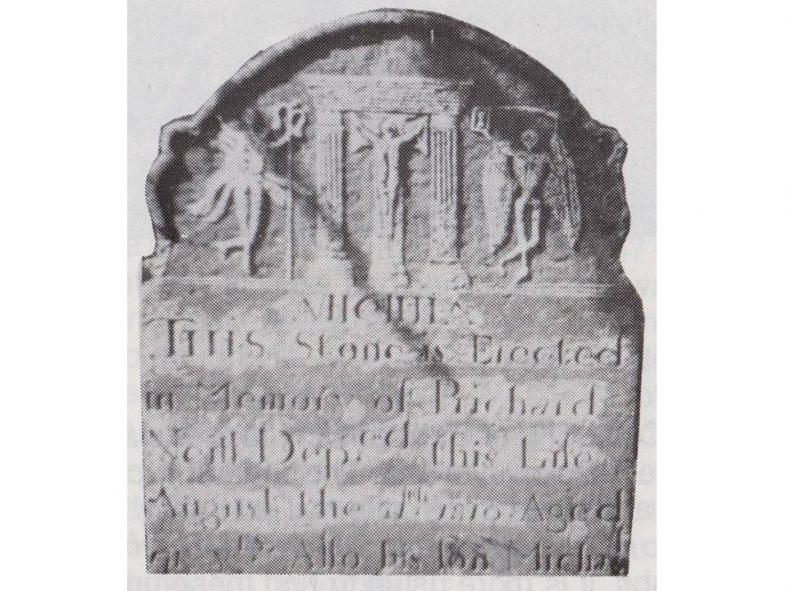 Here we have one of the finest examples of ‘death the grim reaper’ on any headstone in the County. The headstone commemorates Richard NEILL who died in 1810, aged 74, his sons Michael and Patrick who died in 1798 and 1857, respectively. The design is very well balanced and is obviously the work of a skilled mason. On the right is a skeletal winged figure holding aloft, in right hand, an hourglass and in the left hand a scythe. On the left a many ‘skirted’ figure is holding a double-headed shepherd’s crook in the left hand, the right is held aloft (in triumph?). Each figure is standing on one foot, the left leg crossed behind the right giving the impression that they are dancing. See illustration. In a comment of the stone, Major R. R. G. Crookshank (J. Memorials Association, vol. VI, 3, p. 619) records that ‘the country people say that he (Michael) was dragged from his home and executed”. This would have been during that most distressful period of Irish History, the 1798 Rebellion. 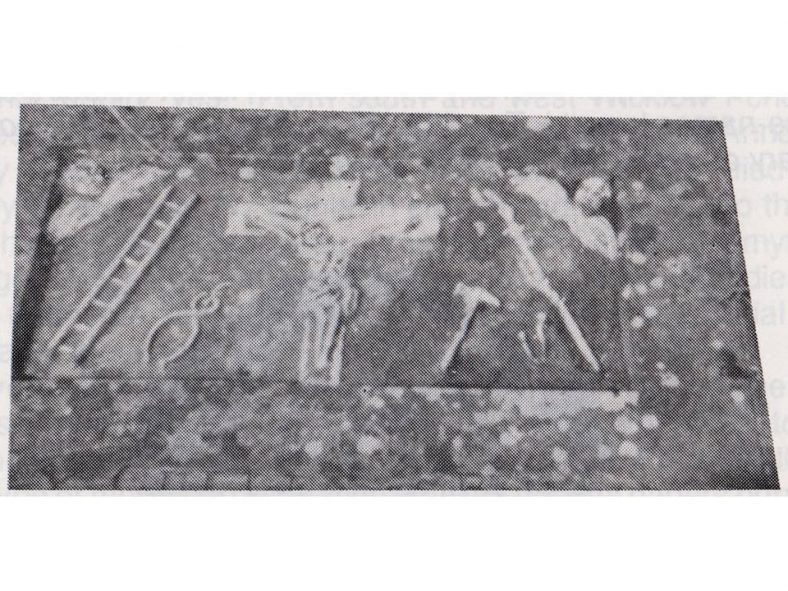 The William CULLEN, of Ballinahinch, ledger slab has a deeply cut example of some Passion symbols. The central crucifix is flanked, on the left, by a ladder and pincers with one nail in its jaws and, on the right, by the hammer, two nails and a spear. The two top corners are occupied by two flying cherubs, it is more usual to find these under the arms of the cross as ‘cup bearers’ to catch His blood. Two drainage holes in lower corners have helped to preserve the carvings. Wade, Upper Berkley St. Dublin, was the carver. As William Cullen died in 1866, it shows that this traditional type of carving was still available in the mid-19th century.

One of the more informative memorials, from the genealogical point of view, which I have noted in the district is that to the BEATTY family. It was erected by Patrick Beatty in memory of his father, John (1855), his grandfather, John (1830), and his great grandfather, William (1807), great grandmother, Anne (1799), his sister, Mary (1860) and his mother, Elizabeth (1887), together with their ages. The order in which the names appear would indicate that the memorial was erected prior to Mary’s death in 1860.

As a contrast, an example of brevity from the same graveyard: ‘Ann NAGLE departed this life 13th Novr. 1820 aged 55 years’.

Daniel McCLENAN was a servant and steward in the Synge, Glanmore Castle, household for 22 years. He served under Frances and John Synge and died in 1835 aged 47. The lengthy inscription on his nicely carved headstone is strange, for it implies that all was not well in the earlier part of his service. Towards the end of the lengthy inscription, it is recorded that ‘his last days were his best days for in them with contrition and sorrow he sought and found mercy and died in peace unto God….’.

When the ship “Elaine” was lost with all hands, on the Wicklow Bank in January 1889, the Master, Richard JONES of Pwlleli, was buried here and a headstone erected. There is no mention of either the number of the crew who lost their lives or where they are buried.

Two slabs within the Church of Ireland are very similar in type, did they come from the same atelier and from the earlier church? Canon Pettigrew told me recently that one, at least, had been lifted and was found to be on solid ground and not covering a vault. They commemorate Robert BAKER and his two daughters, Mary and Judith; he died in 1711, their dates are not stated and Capt. Thomas WALTON ‘of ye Honr. Collo (Colonel?) Thomas Chudleight Regimt of F-T’, he died in 1718.

A tablet within the church commemorated Thos. GILL ‘Comd. Boatman of H.M. Coastguard, Wicklow”, he died in 1886, aged 42. Other tablets mention the HALPIN, ROOKE and other families. That to ROOKE gives details of the installation of the organ.

Almost every type of memorial is represented in the adjoining church­yard and many have details of interest. The large circular memorial to the ANKETELLS of county Monaghan covers the period 1817-1822, it was designed by ‘G. Papworth, Archt.’ The HALPINS have four memorials (three within an iron-railed enclosure), over 25 members of the family, who died between 1814 and 1961 are recorded. Eaton C. Halpin (1857) and Capts. Frederick (1859) and Tho. J. Halpin (1878) are amongst those mentioned. Pigots Directory, op.cit. lists, under Innkeepers, a James, could this be the same person as the James who died in 1847? If so, he would have been aged approx. 46 when listed by Pigot.

Other memorials with naval references include those to John BURY (1813), Surgeon H.M. Ship “Ville de Paris”, and Andrew THOMSON who was ‘Commander of the Ship “Strabane” of Glasgow’, he ‘perished’ off Wicklow February 21st. 1838 at the early age twenty-six in the noble and …. (illegible) to save his crew and the ship intrusted (sic) to his charge.’

An unusual and economic lay-out of an inscription is seen on the MARKS memorial. It appears thus:

Two very large slabs, in an iron-railed enclosure, commemorate the FOX family, sometime of Main Street, Wicklow. They cover the periods 1773 to 1851 and 1866 to 1884. One of the Fox daughters appears to have married a HAMILTON for that name appears from 1877 to 1939. Pigot, op.cit., mentions a Thomas Fox, ‘earthenware dealer’, possibly the same as the Thomas who died in 1851, aged 68.

I found it impossible to read many of the window dedications in St. Patrick’s R.C. Church, the lower line of the inscriptions being obscured. A statue dedication records, amongst other members of her family, Cecilia MULLINS, whilst a brass plate affixed to the plinth says Cecelia, both are undated.

The use of Irish on memorials within the period covered by my researches was seldom noted. One inscription that comes to mind is in Killadreenan and is on one of four memorials to the LICKEN/LIKEN/ LAKEN with DOYLE and WHITTY families, all are on the same grave, so all interrelated. The Whitty inscriptions include references to Mairgread de Faoite, who died in 1933, aged 86; Seoram de Faoite, 1911, aged 65 and Maire Aine de Faoite, 1918, aged 62. All the references to these persons are in Irish script and the last two mentioned have the English version of their names in brackets following the Irish, i.e. Joseph Whitty and Marianne Whitty. The Whittys came from Ballysimon, Co. Wicklow, a place not traced in Price’s Place-names index.

This short survey covers only a small number of graveyards and churches in the neighbourhood of Wicklow town, the extracts are taken from my Memorials of the Dead, vols. I and II. These can be inspected in the County Library, Wicklow town branch where the complete inscrip­tions are recorded. 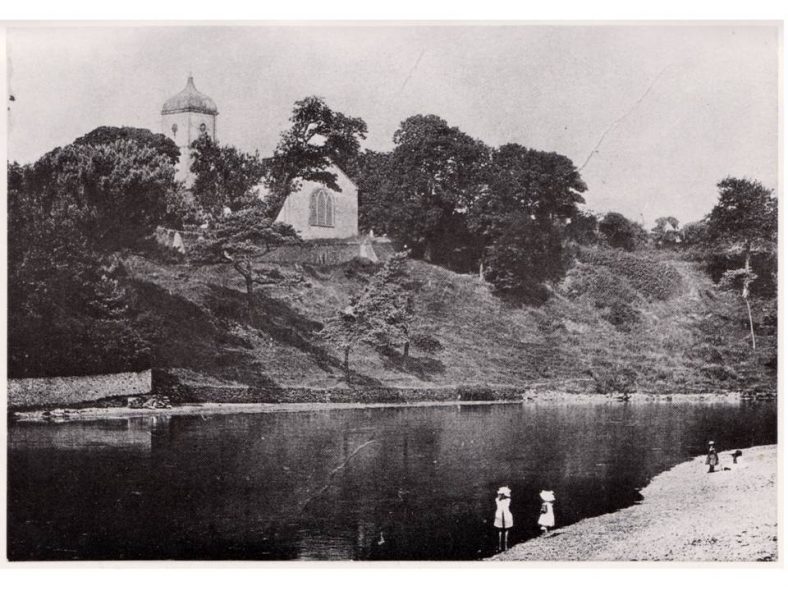 Wicklow Parish Church, standing on the site of an old church, dedicated to St. Thomas, Abbot of Glendalough, 1173. Photo circa 1900.