On Thursday November 11th, 1915 a storm of terrific violence hit the Irish coast.

The Easterly winds caused havoc, with many vessels being driven ashore. In Donaghdee, Co. Down, the French Ketch ‘Cyrano’ was wrecked and her crew of ten were rescued. Also in Rosslare eight ships were wrecked, including three schooners and a number of fishing boats. None of the mail boats could cross from Dublin to Holyhead and huge seas devastated the railway line at Bray Head and caused extensive damage to Bray promenade. 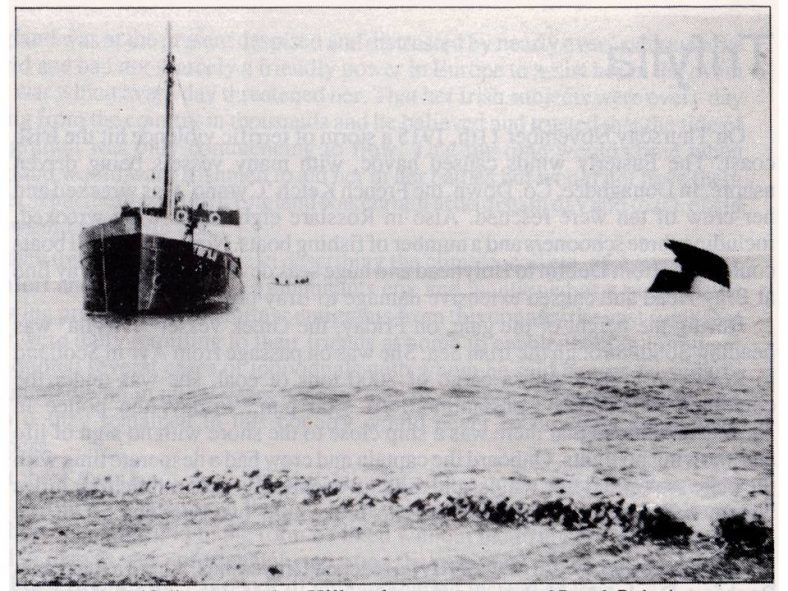 A Greek vessel in trouble

During the height of the gale, on Friday, the Greek vessel ‘Trifylia’ was heading South through the Irish Sea. She was on passage from Ayr in Scotland to Rouen in France with a cargo of 2000 tons of coal, she was under the command of Captain Constantinon. At 5.00 p.m., Friday, the police in Newcastle noticed that there was a ship close to the shore with no sign of life and showing no lights. Onboard the captain and crew had a desperate time with the huge seas and fierce winds, and the ship eventually went ashore four miles North of Wicklow Harbour where she broke into two sections aft of the accommodation.

During the night word of the Trifylia reached Greystones, where a local man Rochfort Doyle, decided to see the ship for himself. He walked along the railway line on his own and reached the vessel just before dawn. By this time all of the crew had gathered on the bow and he could hear them talking. Mr. Doyle shouted to them to throw a rope, apparently some of them could speak English. He then secured the rope to a telegraph pole and all of the twenty crew succeeded in scrambling ashore safely. The nineteen Greeks and one Italian were brought to a farm house near Newcastle Village, to a Mrs. Dobb. They were given hot food and their clothes dried. In thanks Captain Constantinon gave Rochfort Doyle the ship’s flag.

The chief steward in an interview to the Wicklow Newsletter, said ‘he had over £200 worth of provisions on board and that along with the cargo had to be abandoned’. He also went on to say; ‘the crew succeeded in getting their money but all their possessions were lost’. Mr. Samuel Pim of the Shipwrecked Marines Association arranged for the crew to be sent to Dublin and he contacted the Greek consulate.

It was not until 7.45 a.m. the following morning that Honorary Secretary Robert Lees, instructed the Lifeboat ‘Robert T. Garden’ to launch. The lifeboat under Coxswain Edward Byrne, slid down the slip and stuck at the bottom due to the accumulation of gravel and weed. The boat had to be hauled back up and did not get away until 9.00 a.m. on arriving at the wreck it was found that all the crew were safely ashore and she returned to station. 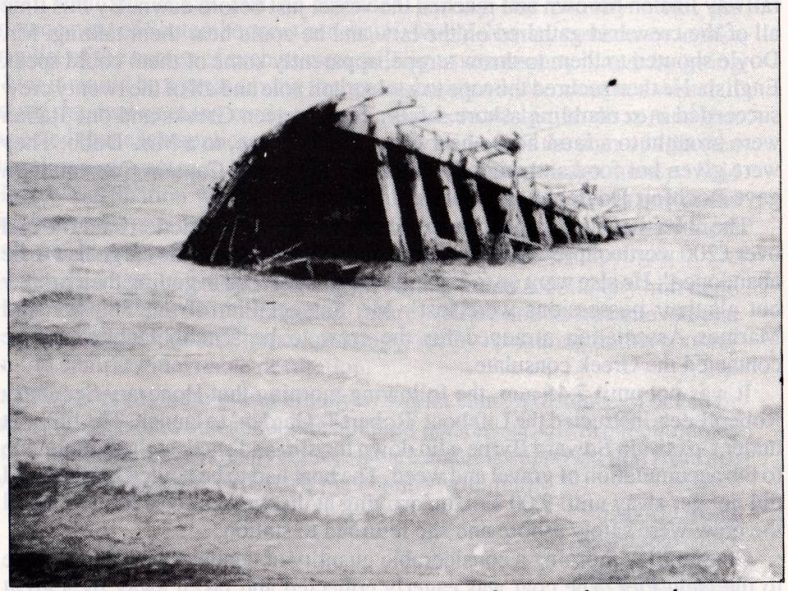 Stern section, which broke away shortly after vessel went ashore.

‘Black Diamonds’ for the taking!

On Saturday morning a considerable quantity of coal washed ashore close to the New Pier. The coal was eagerly collected and taken away by a great number of people. Scenes of great activity were witnessed when horses, donkeys and carts, young and old with buckets collecting what the Wicklow Newsletter called “The Black Diamonds”. It was thought that the coal had been in the water for some time and did not constitute part of the cargo from the Trifylia. It was felt that it was from a schooner which had sunk in the bay, after it caught fire, some years previously.

The Trifylia was classed by Lloyds, her underwriters, as an Iron Screw Schooner, 258 feet long, 32 feet beam and 21.2 foot draft. Her gross tonnage was 1,336. She was built in Newcastle in England in 1879 by the Tyne Iron Ship Building Co. and was registered in Piraeus, Greece.

At a meeting of Wicklow Harbour Board the following week, the Harbour Master, James Goodman, was asked why there were no lights on both piers, during the night of the wreck. He informed the meeting that the ‘Gas Manager’ was unable to get to the lamps because of the sea breaking on the piers. It would have been impossible to light them anyway because gravel had got into the lights themselves. It was the first time the piers were without a light since they were built. 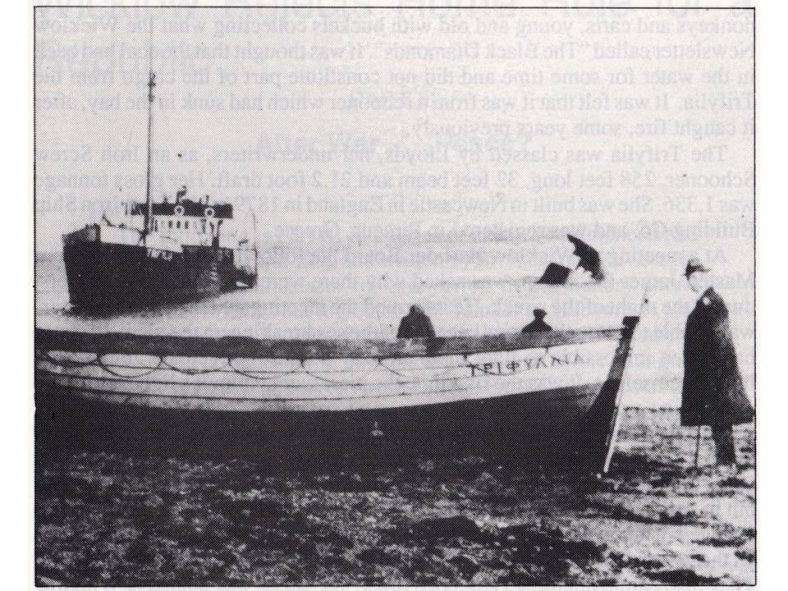 Trifylia with one of her lifeboats

The Wicklow Newsletter reported that another storm on December 27th opened the wreck and scattered her cargo of coal along the beach. This was again to the benefit of the locals. No attempt was made to re-float the Trifylia but in April 1919 the Belfast Marine Salvage Co., 42 Howard St., Belfast, was engaged in recovering 1000 tons of iron, brass and copper from what remained on the wreck. The ship ‘ Alert’ under Captain Adams was used in this operation. They also employed the services of a diver. The metal was landed at Wicklow and then re-shipped to Glasgow. The same ship was also used in the salvage of the ship ‘Paragon’ which was wrecked at Brittas Bay.

In the early 80’s Wicklow Sub-Aqua Club began diving the wreck of the Trifylia, by that time she was well broken up and scattered. Among the wreckage were her Anchors. These were eventually brought to the surface in August 1985 and were finally erected on a stone plinth overlooking Wicklow Harbour. During an unveiling ceremony in June 1986 they were dedicated to all those who were lost at sea from Wicklow. 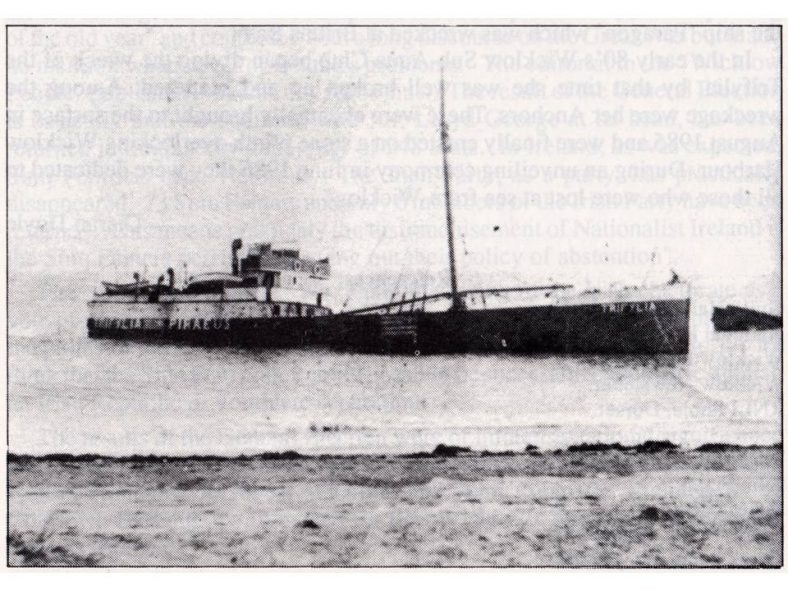