A Miscellany of Murder: Violent Death in 19th Century Wicklow

Violent crime in Co. Wicklow was almost as rare during most of the nineteenth century as it is today. Extant constabulary returns made to Dublin Castle and now in the National Archives give a concise breakdown of all reported crime year by year and county by county from 1843, (1) the year which saw the last execution to take place in County Wicklow.

From the annual statistical returns it is possible to see that Wicklow consistently came very far down the national league in terms of crime. Although the sort of comprehensive detailed statistics reproduced in the table at the end of this article are not, available consistently for years earlier than 1843, it is possible, piecing together reports from police and magistrates, to gain a fairly full impression of what was happening in the county. From asearly as 1807 these reports were stating that Wicklow was perfectly peaceable, a slight exaggeration, perhaps, as bands of brigands were reported to be active in the early years of the century, especially in West Wicklow, robbing the houses of the wealthy or waylaying the occasional traveller. (2) Ribbonism (violent agrarian agitation undertaken by secret societies) which was a major concern elsewhere, affected the county, particularly the west of the county, in the early 1820s. However, the opposition of the Roman Catholic clergy, who were prepared to give information to the authorities, seems to have had a decisive in?uence in stemming its growth in Wicklow.(3)

Some years were of course worse than others and in the early decades a feeling of impending catastrophe prevailed in many quarters. Although the frightfulness of 1798 and its aftermath was relatively short-lived, it left its legacy of fear on both sides. Musgrave detailed 84 cases of loyalists being murdered in 1798.(4) On the other side the numbers murdered by loyalists is probably impossible to calculate. Communities of Protestants and Catholics were stillviewing each other with fear and suspicion in the 1820s and 1830s. There were periodic reports of members of one denomination gathering together to guard against imminent attack by the other. Such was the case in December 1824 when Protestants from Bray to Arklow were reported to be in a state of alarm, being apprehensive of some sudden attack. In February 1829 Catholics in Tinahely were reported to be sitting up every night expecting to be murdered by Protestants, while in 1832 Protestants around Tinahely locked themselves in the Market House due to fear of an imminent massacre.(5)

Though the fear may have been real enough, the records show that its cause was illusory. There were no massacres and few killings of any description. During the late 1830s and early 1840s the Assize Court Judges usually ended their addresses to the Grand Jury by congratulating them on the absence of serious crime in the county.(6) Those who petitioned for the reprieve of Edward Donegan, who was sentenced to death in 1859 for murdering his wife, stated that there had not been a conviction for murder in County Wicklow in the previous twelve years and that there had not been a public execution for sixteen years. The petitioners claimed that the county had long been distinguished for the peaceful and orderly conduct of its inhabitants.(7)

Most violent deaths in the years covered by the reports below were the result of drunken affrays, petty jealousies, or domestic quarrels rather than the result of political, religious or social campaigns. One consistent social problem underlying the incidence of violent death throughout the century, however, appears in the figures for infanticide, a crime that was reported separately and recognised as meriting separate categorisation and treatment. This is apparent from the case of Elizabeth Davis detailed below by Joan Kavanagh. Wicklow’s rate of infanticide during part of this period seems to have been comparatively high. The five infanticides reported in the county in 1877, for instance, represented the highest number for any county in Ireland in that year. Significantly, however, of the three types of violent death listed in the statistics below, it is infanticide which shows the most marked decline over the period of study, disappearing completely from the figures for the final decade of the century. By then easier access to the cities and the establishment of homes for distressed women meant that births outside marriage were less likely to result in the death of the infant.

Murder and manslaughter were distinguished from each other in the statistics only from 1865. Prior to that both were returned under the common head of homicide. From. 1865 until the end of the century there were thirteen murders in the county. Only two of these were punished by the death sentence. In fact only four people were executed for crimes committed in Wicklow from 1831 to the end of the century. These were:

The death penalty was abolished for twenty-one kinds of offences between 1818 and 1824. Prior to this its use even in Wicklow seems to have been quite extensive. Four men were reported as having been capitally convicted at Wicklow Assizes in 1816.(8) In the 1820s the death sentence was still imposed for many crimes other than murder. Two people were executed at Wicklow Assizes in 1826 for robbery.(9) In 1832 the death sentence was abolished for a wide range of offences including the stealing of horses, cattle and sheep, the larceny of £5 in a house, coining, and most kinds of forgery. In 1834 it was abolished for the offence of returning from transportation, in 1835 for letter stealing in the Post Office and for sacrilege, and in 1837 for all crimes except murder, high treason, rape, arson and a few others of rare occurrence.(10) At the Summer Assizes in Wicklow in 1838, for instance, a capital sentence passed for the crime of rape was commuted to transportation for life.(11) By the mid 1840s the death penalty tended to be reserved for the worst kinds of murder. One hundred and ninety seven executions were carried out in Ireland between 1831 and 1841, but whereas in the years 1831-37 the average number of executions each year was more than 24, in the years 183 8-41 the annual average had dropped to 6.(12)

Comprehensive crime statistics are not available in published form before the 1840s, and descriptive particulars of individual homicides were included in the published statistics only from 1859. The following account of homicides in Wicklow, compiled from the extant police and magistrates’ reports for the years from 1810 to 1899 falls into three chronological sections: 1810-58; 1859-83; and 1884-99; For the period from 1810 to 1858 the information presented here can in no sense be regarded as comprehensive (comprehensive statistics from 1843 without descriptive particulars are, however, contained in the table appended to this article). For the years 1859-1883 the annual published reports from which the extracts below have been taken do not indicate the precise location of crimes. From 1884 until 1899 precise details of location are available. Where possible, the locations of earlier homicides have been added to the extracts published here. For any researcher interested in the details of a particular case, however, the information presented here should be regarded as a starting point. In most cases more extensive research among the Constabulary Reports in the National Archives will yield more comprehensive details on particular crimes.

The following report of the subsequent inquest appeared in the Wicklow News-letter on Saturday 16 February 1861:

An inquest was held on Thursday in the Courthouse by Matthew Hudson Jones, Esq. Coroner, and a respectable jury, with John Perrin Esq., as foreman, on the body of an old woman named Catherine Cuthbert who was run over by the mail car from Rathdrum on the 17th January while in the act of crossing over the street from Mr. Rooney’s to Mrs.Gregg’s.

It appeared from the evidence that on the day in question Mr. Comerford and another gentleman were on the car and the driver, a man named Joseph Wright, drove up to Mr. Thomas Merrigans for the purpose of letting the former gentleman down; Whilst Mr. Comerford was speaking to Merrigan some time was lost, and in order to pull it up, the driver went off at a rapid rate, about seven miles an hour, and in turning the corner at Mrs. Gregg’s from the direction of Church Street, this old woman was struck by the car, and knocked down. She took to her bed from that day and died a few days ago.

The jury returned a verdict in accordance with the foregoing facts; stating also that her death resulted from recklessness on the part of the driver, who was then committed for trial, at the next Assizes, on the Coroner’s warrant.(36)

At the Spring Assizes the bill against Wright was ignored. It would seem, however, that 1861 was not a lucky year for the mail coaches, as on 13th February, the day before the inquest on Catherine Cuthbert, the Constabulary reported an accident at Glenealy involving the night mail from Wexford to Dublin in which several passengers had been injured. The coachman was believed to have been drunk.(37)

[At the spring Assizes 1873 Michael Connors was tried a second time and was acquitted.]

[At the Spring Assizes 1874 Joshua Chase was sentenced to twelve months’ imprisonment with hard labour.]

[At the Spring Assizes 1874 John Kelly was sentenced to two years’ imprisonment with hard labour.]

[Cornelius Manifold was acquitted at the Spring Assizes 1875]

[At the Spring Assizes, 1877, Hannah Kenney was sentenced to twelve months’ imprisonment with hard labour.]

Table 1: Homicide and infanticide in Wicklow 1843-99 with comparative ?gures for Ireland as a whole.

*Note: murder and manslaughter were not differentiated in the annual statisics until 1865. Before this are reported under the head of homicide.

4. Sir Richard Musgrave, A history of the Different Rebellions in Ireland, pp 312-315.

6. Wicklow County Library, micro?lmed extracts from Freeman’s Journal, 12 July 1838, 5 July 1839. I am greatly indebted to Joan Kavanagh of the County Wicklow Heritage Project for giving me these references.

22. NAI Retums to the CSO from Constabulary, Monthly Statements of Outrages, 1829.

29. Returns from CSO from Constabulary, Monthly Statements of Outrages, 1843.

34. Unless otherwise footnoted, the source for each of these reports is the return of outrages for the relevant year in NAI, Irish Crimes Records, Returns of Outrages 1848-93.

36. I am very grateful to Jimmy Cleary for this transcript.

38. Unless otherwise footnoted, the sources for these reports are the annual returns of outrages in NAI, Irish Crimes Records 1848-93, and NAI, RIC Annual and Monthly printed Outrage Reports 1892-1913, for the appropriate dates. 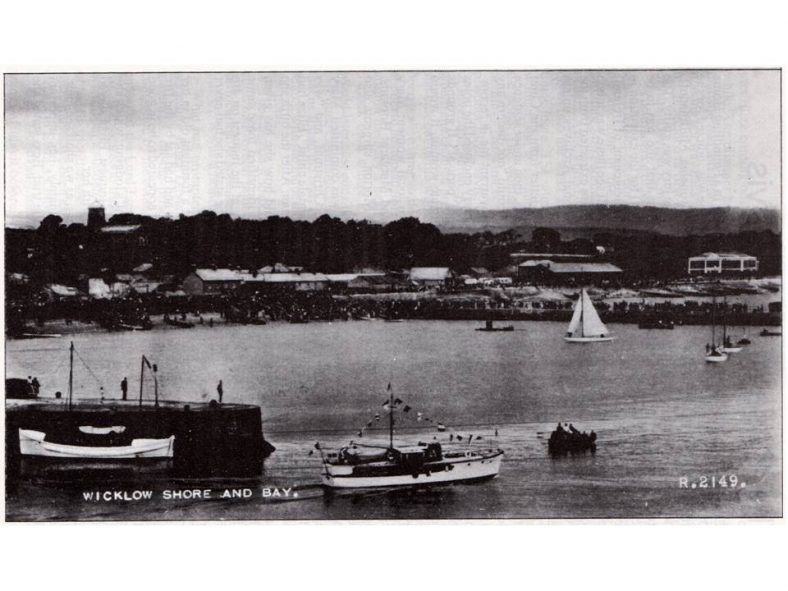